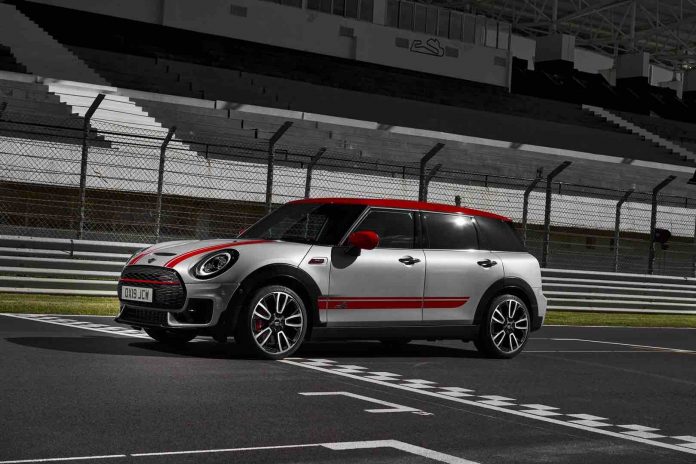 And possibly sporty small cars, too.

Like the BMW Mini Cooper – which the smallest sporty new car you can buy.

And which you can no longer buy with a manual transmission – chiefly because of pressure from the government to squeeze more MPGs out of new cars. More precisely, to achieve better MPGs on the government’s mandatory minimum MPG test loop. And automatics are better at that because they can be programmed to shift in such a way as to maximize MPGs  . . .  for testing purposes. 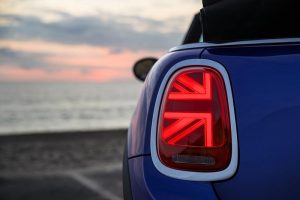 The Mini Cooper is the iconic British small car made by German car company BMW. It has lots of British heritage – and German engineering.

You can get it as a two-door hardtop (with hatchback) or a four-door hardtop (also hatchback’d) with your pick of three or four cylinder engines, the latter in two states of tune (hot and hotter). You can also order up an almost limitless combination of colors and trim pieces, to customize your Cooper and make it uniquely your Cooper.

The one thing you can’t get anymore, however, is a manual transmission. All Minis are now automatic-only. 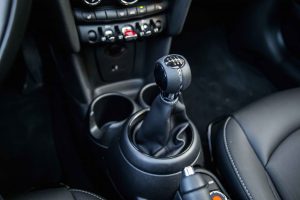 But you do still get to pick seven or eight speeds.

The main change for 2020 is the elimination of the option to change gears yourself. 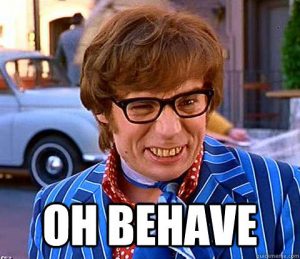 But there is one consolation for this reduction. This spring, Mini is going to offer an ultra-performance GP package (two-doors only) with 302 horsepower and a top speed approaching 170 MPH.

Only 3,000 of these are going to be made, so if you’re interested, get to your local Mini store while they’re still open (and possibly before they close forever).

Still a lot of fun.

A lot of cargo space for the size. 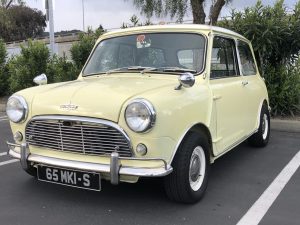 Less fun without a manual option.

Not enough backseat space for the human-sized.

JCW performance package no longer offered with the four-door Mini.

Both two and four-door Minis come standard with a BMW-sourced 1.5 liter turbocharged three cylinder engine that makes 134 horsepower – which is not very much horsepower, even for a very small car. 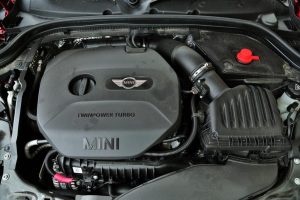 But the horsepower deficit is compensated for by an abundance of torque. The little engine makes 162 ft.-lbs. of twist at just 1,250 RPM, which is enough to get the Mini to 60 in about 7.6 seconds, a very speedy time for a car with not very much horsepower.

If more horsepower – and torque – are wanted, the Mini S has you covered with a larger, 2.0 liter four cylinder engine – also turbocharged. It makes 189 horsepower and 207 ft.-lbs. of torque, enough to drop the car’s time to 60 down to just over 6 seconds. 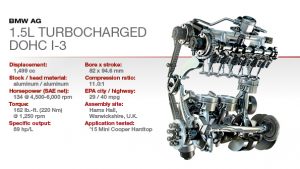 For the most horsepower – an torque – there’s the pinnacle Mini, the John Cooper Works  (JCW)) version. It also has a 2.0 liter turbocharged four cylinder engine but the output is bumped up (via more turbo boost) to 228 hp and 236 ft.-lbs. of torque. Which drops the 0-60 time into the highs fives – which makes the JCW Mini one of the speediest smallest cars on the road. 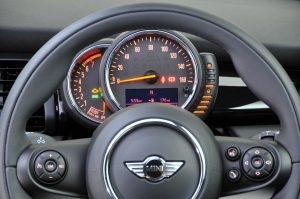 Which is why the manual is no longer available.

Three MPGs in city driving and 2-3 on the highway may not seem like much – and isn’t, from the standpoint of the driver and especially when you factor in the cost of gas, which is low – and driving styles, which vary. But the difference is huge from the standpoint of Mini – which must “comply” with those government-enforced mandatory MPG minimums, which are currently set at just under 36 MPG. 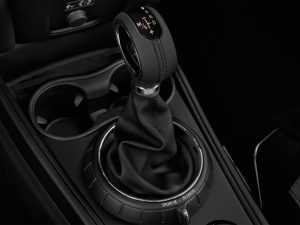 Interestingly, the 2019 Mini with the 1.5 liter engine and the six-speed manual you used to be able to get rated 28 city, 38 highway – slightly better on the highway than the 2020 with the same engine and the seven-speed automatic.

The Mini – either four doors or two – is still a lot of fun to drive even if there’s less for the driver to do, now that the option to shift for yourself is off the table. 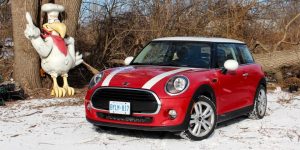 Objectively, the seven and eight-speed automatics work better with the turbo-boosted 1.5 and 2.0 liter engines because they multiply the advantages of all that low-down torque – via the automatic’s torque converter, which magnifies an engine’s torque during initial acceleration from a standstill.

Even the 1.5 liter engine will skitter the tires if you floor it from a dead stop – with the traction control off. The 2.0 liter engine can roast them, especially if you load up the torque converter by power-braking the thing before you launch.

But the manual is more intangibly fun. Too bad it’s gone. 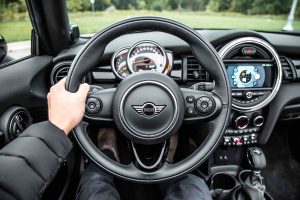 What’s still there, however, is the Mini’s ability to maneuver. Driving this car is like playing Frogger – the video game where a digital frog hops from log to lily pad to rock, all the way across the river.

It’s much more fun to do this on the road. Half a standard car’s length in between you and the Clover ahead is enough room for the Mini to make its move. Bye-bye Clover! The Mini makes its happy sounds as you thread the needle.

It is almost as much fun as riding a motorcycle. More fun, when it’s raining. Because you’re dry.

And just as easy to park as a bike. Because it’s about the same length as one. If you need a back-up camera to park this one, you shouldn’t be driving anything. 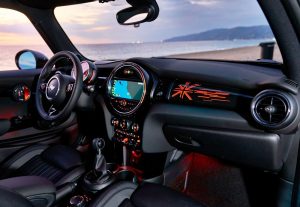 The Mini’s look – and concept – dates back to the ’60s (and England) but it hasn’t gotten old (even though the car is now built by Germans).

It manages the hat trick of being cute without being feminine. Snarky – without being menacing. Everyone, just about likes the Mini.

Part of the reason for that – other than its makes-you-smile appearance – is its very small footprint. The two-door is only 151.9 inches long, which is about three feet shorter overall than a current mid-sized sedan. 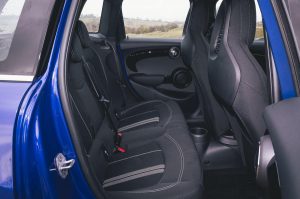 And yet, it has 34 cubic feet of cargo space – about twice as much space as most mid-sized sedans have. Headroom is also more than you’d expect – almost 40 inches for the driver and front seat passenger. 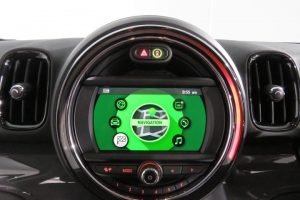 If you can handle four doors, you’ll get a more doable 32.3 inches, which is on par with what you’d find in the backseat area of a current model year compact-sized sedan, which will not have 40.7 cubic feet o cargo capacity, as the four-door Mini’s got with its back seats folded down.

All Minis come with amenities – including standard simulated leather in the base trim, a six-speaker stereo and adaptive cruise control. They also come standard with retro-cool features such as ’60s-style toggle controls for the power windows and door locks and a re-imagining of the original ’60s Mini’s huge centrally mounted speedometer, which is now a huge centrally mounted LCD touchscreen. 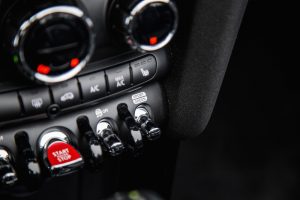 Mini offers a Signature package – available with any Mini – that decks the car out with a panorama sunroof and seat heaters; you can upgrade to the Premium Signature and get an excellent 12-speaker Harman Kardon ultra-premium audio system. 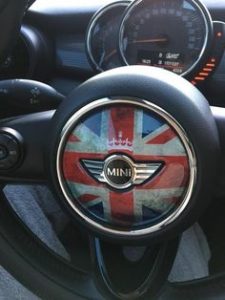 Unusually for a modestly priced car aimed at people looking for economy as well as fun, all of the Mini’s available engines require premium unleaded fuel. Which requires some explanation. It doesn’t mean that using regular unleaded will damage the engines; but it does mean you probably won’t get the advertised power or gas mileage out of them.

There’s an irony here. The manual was done away with for the sake of MPGs uber alles. But to achieve the mileage advertised, you have to spend an extra 20 cents or so per gallon for the premium fuel the engines need to achieve that mileage.

The good news is that thanks to Corona Fever, premium gas now costs less than regular unleaded did three weeks ago.

The probable news is the Mini itself is likely to cost a lot less soon, too – as Corona Fever waxes and Mini stores  the ones still one – get  more an more desperate to sell you a new Mini. 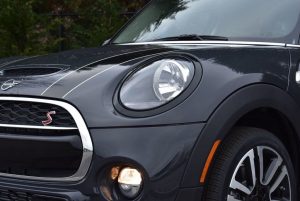 And if you still want that manual Mini, wait a little longer. The mass unemployment-at-government-point created by Corona Fever is going to trigger a tsunami of repos as people stop making payments they no longer have the money to make.

I – when – this Corona Fever ends – it may also mean the end of the government decreeing mandatory MPG minimums. And then we’ll be able to buy sporty small cars with manual transmissions again.

Still cute, still fun. But it was always more fun with a clutch.