Kristin asks: Is it still worth getting a radar detector given how many cops use Instant On to peg “speeders”? My understanding is that radar detectors are only or at least mostly effective only against a steady radar beam, which they can alert you to in time to reduce speed and avoid the ticket? Is that still true?

My reply: There is truth in both.

Yes, it is true that many AGWs use Instant On radar to “peg” (perfect word choice) people who drive faster than the arbitrarily decreed maximum allowable speed. And yes, it’s true that it is harder to detect Instant On in time to reduce speed. 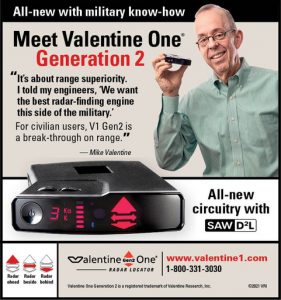 It is generally sound policy to avoid speeding by yourself. The best policy is to let someone else speed ahead of you. To run point, as the military saying goes. If you are the only car on the road, you are also the only target on the road. Tread carefully, even with countermeasures such as a radar detector at hand.

Also, buy a good radar detector, if you’re going to buy one at all.  Like the latest generation Valentine1, which has arguably the best filtration system and sensitivity on the market. Well worth the expense, in the same way that good tires are worth the expense. The cheap ones wear out sooner – and end up costing you more. The bad detectors don’t detect as effectively – and end up costing you more.

No countermeasure is foolproof. But this is about reducing the odds – or rather, increasing the odds in your favor – that you won’t get a piece of payin’ paper.

And in that sense, a radar detector is money very well spent!