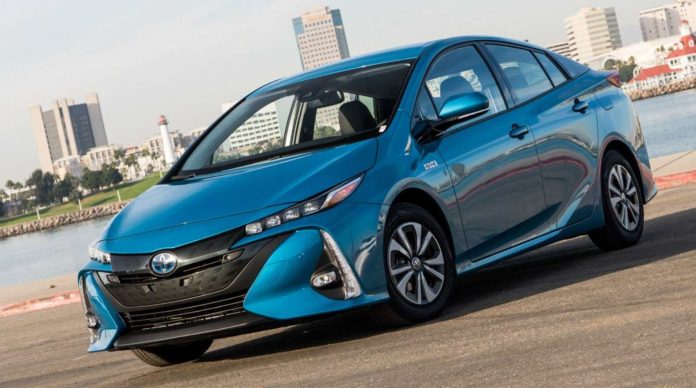 The best electric car is the one you never have to plug in.

A hybrid electric car – like the Toyota Prius. It has all of the advantages of an electric car – including the ability to be plugged in (if you buy the plug-in version) and run on battery alone – for about 25 miles – without ever having to worry about plugging in because it can recharge itself, as you drive.

It also has twice the range of any purely electric car – more than 600 miles – so you don’t have to stop for gas very often, either.

It’s an example of an electric car that makes a lot of sense – which is probably why so many people have bought one.

The Prius is the original hybrid – the first-mass produced partially-electric car.

The Prius also addresses another electric car problem – their cost. You won’t spend a cent on gasoline if you buy an EV – but you’ll spend a fortune on the EV. The least expensive model – Nissan’s Leaf – costs $27,400 (for the base version with a smaller battery and just 150 miles of range). A Leaf with a  higher-capacity battery and 226 miles of range lists for $32,400. Other “entry-level” EVs like the Chevy Bolt are similarly pricey.

A Prius stickers for $24,525 to start for the L Eco trim – saving you about $4k at the starting gate vs. the lowest-priced EV currently available (Nissan’s Leaf) and leaving aside the cost of only being to travel about 150 miles in between charge sessions in the Leaf. (unless you spend another $4k-plus for the one that goes 226 miles).

You can also get all-wheel-drive, something rival hybrids like the Hyundai Ioniq ($23,400 to start) don’t offer. The cost so equipped is $27,135 for the LE AWD e trim. 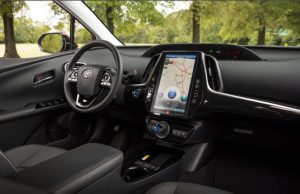 A plug-in variant called the Prime is also available. This one differs from the standard Prius hybrid in that you can plug it in to a household outlet to recharge its batteries – and thereby use no gas to recharge the batteries. It can also travel about 25  miles on battery power alone – just like an electric car. But when it runs out of electric-only range, you don’t have to stop for a charge. Like the standard Prius, the Plug-in also recharges its batteries as you drive, using the gas engine that forms the other side of the hybrid drivetrain as a carry-it-with-you generator. 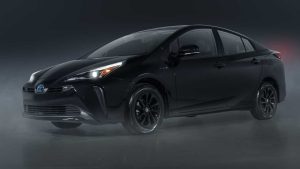 To visually jazz up the Prius a bit, Toyota has added a Nightshade package to the list of available options. It includes black-anodized wheels and trim plus rain-sensing wipers, keyless entry a heated steering wheel and simulated leather seat covers and door panel surfaces.

An electric car that makes practical, economic and environmental sense.

AWD is available – other hybrids in the class like the Hyundai Ioniq and Kia Niro don’t offer it.

Center-mounted LCD touchscreen interface is not easy to use while driving.

Lacks the quickness that comes standard with most EVs. 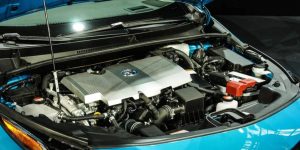 Every Prius comes with the same 1.8 liter, 121 horsepower gas engine – on the one side of the hybrid drivetrain – paired up with a battery pack/electric motors (on the other side of the drivetrain). 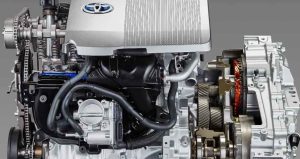 The plug-in Prius has higher-capacity battery pack that can propel the car at normal road speeds for about 25 miles. Its battery pack can also be charged by . . . plugging it in. But – like the standard Prius – you don’t have to plug it in. Both versions carry around their own generator – the 1.8 liter gas engine – which not only recharges the battery pack, it prevents the battery pack from being emptied of charge.

This is a huge hybrid plus rarely discussed.

Because electric cars rely solely on their batteries for propulsion, the batteries are often heavily discharged. This discharge/recharge cycling is what ages a battery pack, much in the way that hammering a gas engine all the time usually results in that engine blowing blue smoke out the tailpipe after a short while.

In a hybrid, the batteries are always maintained at a certain level of charge, reducing “wear and tear” on them. They’re also worked less hard because they’re only partially responsible for propelling the car and powering everything in the car – as in an electric car (including even the heater). 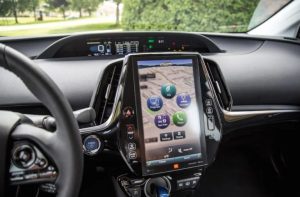 But, the plug-in can be plugged-in. Which means not having to burn any gas to “top off” the battery pack. And because it can be driven about 25 miles without burning any gas, it is possible to burn very little gas, assuming your trip is within the 25 miles of electric-only range. 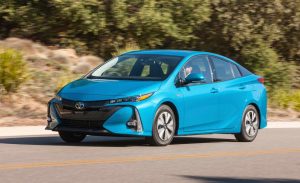 Neither version of the Prius is quick – zero to 60 takes more than 10 seconds – but unlike electric cars, the Prius just keeps on going long after the EV has had to stop and makes you wait while it recharges.

Certainly, the Tesla gets to 60 in less than half the time it takes the Prius to get there. But is this a performance contest? Weren’t electric cars supposed to be all about increasing efficiency? 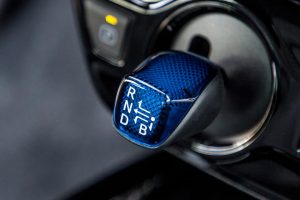 Arguably, it is precisely because EVs are so inefficient – and impractical – that they had to resort to touting how quick they are. There is nothing wrong with quickness; above all, it is fun. But if it costs a lot of money – and wastes a lot of your time – it doesn’t make a lot of sense.

Driving the Prius is much like driving an ordinary economy car. The hybrid drivetrain doesn’t call attention to itself while you’re driving – unless you roll the windows down and listen. Then you may notice the silence, while in “EV” mode. The gas engine is automatically cycled off and on – and you can watch the flow in real time via the display in the main gauge cluster or the larger LCD touchscreen mounted in the center stack. 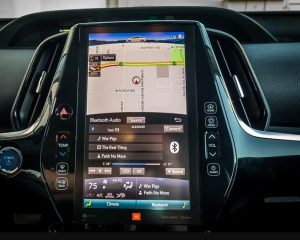 This where the Prius differs from an ordinary economy car – and from other hybrids, like the Hyundai Ioniq and its Kia-cousin, the Niro. It has a funky and not very functional interior layout. The main gauge cluster is located equidistant between the driver and front seat passenger at the top of the dashpad – which is ok because it’s still in the driver’s line of sight and provides the pertinent information he needs, such as speed and fuel remaining.

The large, centrally mounted LCD touchscreen that comes standard in the top-of-the-line Limited trim is another matter.

Tesla pioneered this kind of interface and Toyota seems to be emulating Tesla in this respect. But here’s the problem: Many necessary operational controls – for example, the temperature/fan speed settings – practically require you to stop paying attention to the road while you pay attention to the LCD screen, making sure you tap/swipe the right control. This is almost impossible to do without looking – which isn’t good when you’re moving.

The good news is the oversized/poorly situated 11.6 inch Tesla-emulating touchscreen is optional. So you can avoid it. The standard L,LE and XLE trims come with a smaller 7-inch touchscreen and more ergonomic push-button controls for most accessories that can be easily operated without taking your eyes off the road. 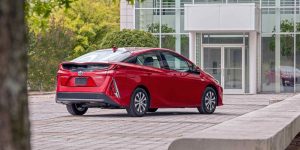 The Prius is the most recognizable hybrid – deliberately so.

Toyota purposely designed it to look unlike other cars. Some like the car’s looks. Some do not like them. Its styling can be polarizing – but it hasn’t been a problem for Toyota, which has sold this car in numbers far exceeding those of any rival and all electric cars, combined.

Something almost everyone will like about this car is its expansive side glass, which tapers downward toward the front of the car so that by the time it reaches the driver/passenger side, the view to the side is superior vs. many other modern cars. The door tops are low enough that you can almost rest your elbows on them with the windows rolled down, too. 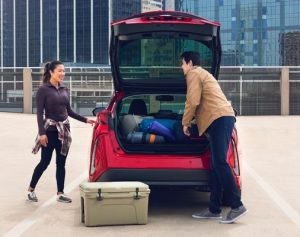 Another inarguability is the hatchback layout, which greatly ups the practicality quotient by making it feasible to use this car for things Toyota probably never intended it to be used for – such as carrying home a 4x4x6 fence post from Lowes, with the rear hatch closed.

One more thing that’s hard to gainsay is that because it’s so affordable, you can afford to buy more than just efficiency. The XLE trim comes loaded with heated seats covered in SofTex simulated leather, rain-sensing wipers, keyless entry, wireless phone charging and so on – plus that near-700 mile range, without the wait – for about the same as Nissan wants for the base-trim Leaf without such amenities and with only 150 miles of range.

One nettle is that some desirable options – such as the 10 speaker JBL audio system that comes standard in the Limited (along with the Tesla-style touchscreen) aren’t available a la carte in the lower-priced trims.

Also, AWD is only available with the the standard Prius; the plug-in version is  FWD-only.

Electric-only cars are said to be better for the environment. But are they, really? Their much larger battery packs burn up more natural resources – and energy to make them. They draw more power, to recharge them. And because of all that heavy discharge-recharge cycling, their battery packs will almost certainly not last as long and so will need to be replaced sooner – with another resource-gobbling/energy-hogging battery pack. 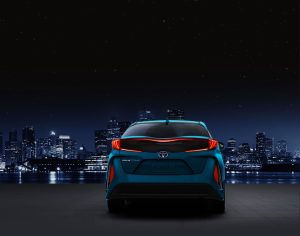 The Prius may not be 100 percent “zero emissions.” But isn’t it enough to be nearly that? Especially when EVs aren’t, really – and when their forbidding cost precludes their purchase by people who aren’t affluent enough to indulge them?

If you’d like to just drive – without having to constantly think about how soon you’ll have to stop – the Prius might jut be the right electric car for you.

My eBook about car buying (new and used) is also available for your favorite price – free! Click here.  If that fails, email me at EPeters9[email protected] and I will send you a copy directly!