Toyota has built a better Prius – a hybrid that is economical to buy as well as operate. 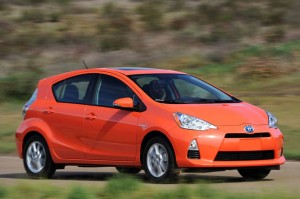 As such, the C is the first hybrid since the original Honda Insight hybrid two-seater that actually lives up to the hybrid hype.

It might also just be the Prius Toyota should have built from the get-go!

The Prius C is a compact-sized hybrid hatchback sedan – slightly smaller on the outside than the regular Prius, but not all that much smaller on the inside.

The Prius C is also much more affordable than a regular Prius. Its base of $18,950 is $5,050 less to start than the $24,000 base price of its only slightly bigger, not-quite-as-fuel-efficient brother.

It’s also much affordable than any other hybrid vehicle currently on the market.

Which means, it’s pretty much got the market to itself. 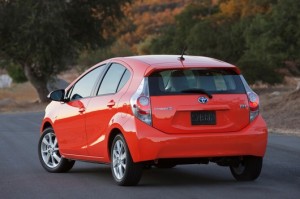 The Prius C is a new addition to the Prius family of hybrids, which now includes the larger Prius hatchback sedan and the Prius v wagon.

It’s affordable – at around $19k to start, it’s very close to the up-front cost of many non-hybrid economy sedans – unlike the pricey Prius.

It’s not stripped and unlivable in as-it-sits $19k trim. Essentials like AC are included. Plus power windows, locks, Bluetooth and a nice stereo, too.

No plug-in version (yet).

Shelf-life issues (more on that below). 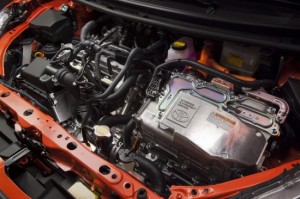 The Prius C is propelled primarily by a 1.5 liter gas engine (vs. 1.8 in the regular Prius) that produces 73 hp – supplemented by an electric NiMh battery pack and electric motors (there are two).

But because the Prius C is so much lighter – more than 500 pounds lighter than the standard Prius – its fuel-efficiency potential is superior. EPA gives the C a rating of 53 city and 46 highway vs. 51 city and 48 highway for the heftier regular model Prius.

I know that doesn’t sound like much of a difference on paper, but out in the real world – at least, in my real world – the Prius C delivered consistent mid 40s no matter how I drove it vs. mid-high 30s for the last several standard-sized Priuses I’ve tested. I don’t know this for a fact, but I suspect the reason for the difference has to do with the C not having to haul 3,042 lbs. (plus 200 pounds of me) up an 8 percent grade that goes from about 800 feet above seal level to 3,200 feet above sea level – my everyday trip up and down the mountain. The regular Prius sweats that trip. You can literally watch the little battery meter deplete to nada – like the gas gauge needle in a ’58 Plymouth running 80 on the highway.

The C seemed to cope much better – I suspect because it takes less work (and so, less gas) to haul 2,500 lbs. up the mountain. If only they could get the weight down to 2,000 lbs. – then they’d really have something.

Like the regular Prius, the C is front wheel drive and comes with a continuously variable (CVT) automatic transmission and engine braking function to help replenish the batteries when going downhill. 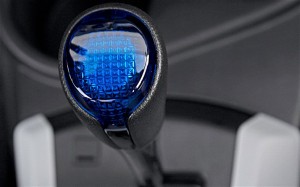 Also like the regular Prius, the C is capable of moving at speeds up to about 20-something MPH  – if you accelerate very gently and if the road is level – on battery power alone. And of course, the car’s computer will automatically turn off the gas engine when the C is stopped to conserve fuel – provided the batteries aren’t depleted. If they are, then the engine will run until they’re sufficiently topped off.

One area where the C differs functionally from the regular Prius is that – at least for the moment – a plug-in option is not available. So you can’t replenish its electric batteries using your home’s 110v outlets. The only way to charge the batteries is to run the gas engine – which operates as a generator. Of course, that burns gas – reducing the C’s MPG profile.

I expect a plug-in version of the C to be available within a year. And that version ought to be good for 60 MPG (overall) even without shedding another few hundred pounds.

Though it takes a second longer to get to 60, all-out, the C feels much lighter on its feet than the regular Prius – because it is much lighter on its feet. You will most notice the difference when cornering. Not having that additional 546 pounds of unsprung mass to keep from springing around manifests in a less top-heavy (and just plain heavy) sensation as you come into a curve – and try to hold the curve. The car also has its four wheels set fairly far apart – and far outward, at the far corners of the vehicle relative to the wheelbase – the proverbial “widetrack” stance – which further enhances stability. 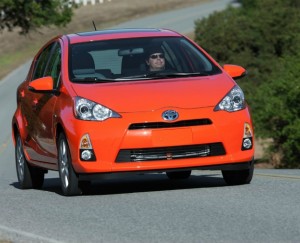 Toyota even offers an optional quick-ratio steering set-up that, along with the almost-sporty curb weight, results in an almost-sporty feeling hybrid.

This sporty ambiance is enhanced by things like the floor-mounted console shifter for the CVT transmission – vs. the video game-style toggle switch mounted up on the dashboard in the regular Prius. This is a personal opinion, but the tactile feel of engaging a detent – Park or Drive – is more appropriate to the act of driving than playing with that flaccid little joystick the standard Prius is saddled with.

Also: The C does not screech alarums when you put it in reverse.

The regular Prius does.

Just one fly in the soup: The C makes sad noises sometimes. Struggling noises, like someone (well, some thing)  under duress. And something is under duress. It’s just the modern – hybrid – version of the sounds you used to hear in economy cars back in the ’60s and ’70s. It’s a byproduct of being underpowered. Or rather, having just barely enough power – and no more than that. When you’re going up a hill, or merging with traffic, the engine – and CVT – can be heard as they struggle to get the job done. It’s not obnoxious, just a reminder that you’re driving a car that’s close to maxxed out just getting around. 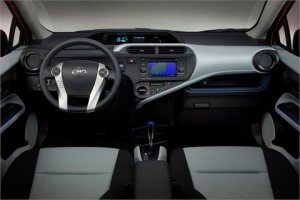 The C’s general shape is more in tune with current non-hybrid hatchback sedan chic than hybrid chic. The regular Prius is almost belligerently hybrid; it wears its green on its sleeve.

The C does not.

But, the C is not bereft of amenities. In fact, it arguably has all the essentials as it sits – such as AC, power windows and locks plus a very decent four-speaker stereo with Bluetooth, CD player and USB interface for your iPod or MP3 player. Plus push-button keyless ignition, tilt-telescoping steering wheel and a 3.5 inch LCD info center that provides you with multiple (and programmable) menus for showing/optimizing the hybrid powertrain’s operation. You can keep track of things like instant and average MPGs, score your driving as more (or less efficient) and calculate your cost-per-mile (and tankful).

More stuff is nice, of course – but far from necessary. 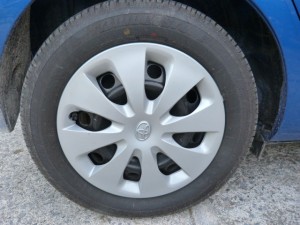 You can move up the foodchain and get things like a larger (6.1 inch) touchscreen LCD display with GPS, heated seats, larger (and alloy) wheels, a six-speaker premium stereo and Toyota’s Entune smartphone system that integrates your phone/PDA with the car’s infotainment technology. With Entune, you can get real-time weather and traffic updates plus streaming Internet programming.

So, what’s the downside?

Ditto second-row legroom. The C has exactly one inch less in this respect than the regular Prius: 35 inches vs. 36 inches. 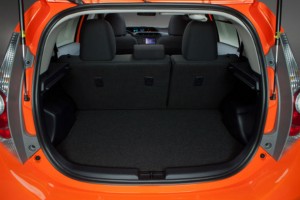 Even cargo-wise, the two cars are pretty close: 21.6 cubic feet behind the second-row seats for the regular Prius vs. 17.1 for the C.

If you need that extra 3 or so cubes of cargo space – or that extra inch of legroom in back – then maybe you need the regular Prius. But if you don’t, you can save yourself a lot of money by going with the C.

You’ll also have the easier-to-park Prius – because the C is about a foot and half shorter, snout to tail, the the regular Prius (157.3 inches vs. 176.4 inches).

Toyota is on the right track with this car. I’ve criticized the regular Prius for being too expensive – and too heavy – and not nearly efficient enough overall (cost to buy plus cost to drive) to justify itself as other than a “green snob” car. But the C makes sense. That $5,000 price difference up front (relative to the regular Prius) not only amounts to “free” gas for several years of driving, it also means the C is not all that far away, MSRP-wise, from what you’d pay for a similar but non-hybrid compact-sized hatchback sedan. For example, a few weeks ago, I test-drove the new Mazda3 SkyActive. Base price is $19,300 for the hatchback sedan – slightly more than the C’s base price of $18,950. Both cars are similarly equipped, but the Mazda maxes out at 40 MPG on the highway vs. the C’s 46. That’s a significant 6 MPG difference. Even more significant, though, is the C’s 53 MPG city rating – vs. just 28 for the SkyActive Mazda. That is a stupendous difference – 25 MPG. 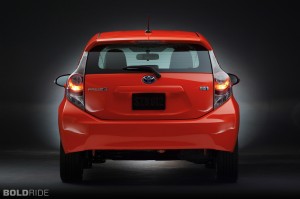 And remember: These two cars cost about the same. That is the key thing here. A standard-sized Prius also delivers 50-plus city mileage, but this on-the-road advantage is negated to a great extent by the much-higher purchase price. The extra $5,000 or so you’d pay to get a standard Prius vs. something like the SkyActive Mazda3 would take years to work off in at-the-pump savings. And that fact has long been a beef of mine as regards the Prius. There were of course other reasons for buying the Prius – just as people have their reasons for buying Porsches. But did the reasons make sense?

Not that I could see.

But with the C, I do see it.  This is the first hybrid since the old two-seater Insight that is cost-competitive with the best non-hybrid economy cars on the market – and very probably, superior to them when all is said and done.

With one caveat:  Battery life.

I’m a guy who buys a car for life. And “life” to me means at least 15 years and 150,000 miles. If the C’s batteries go that distance, great. But if they need to be replaced before then, the math might not work out so favorably relative to a non-hybrid econo-compact, which will have no such issues to sweat you. 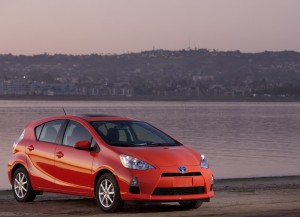 I never thought the words would come off my keyboard – but I like this hybrid. I’m even willing to recommend it – with the cautions mentioned previously kept in mind.