Or even slower.  Maybe not at all.

Among the ways being floated to deal with the deliberately engineered doubling – perhaps soon tripling – of the cost of a gallon of gas by a regime that promised it would do exactly that is to bring back the National Maximum Speed Limit of 55 MPH.

Millennials and younger won’t remember what it was like to take a walk on the highway. To drive slower on the highway than one drove on many secondary roads. For a 200 mile drive to take four hours rather than three. To live in constant fear of being hassled and mulcted by an armed government worker for driving at speeds that had been legal speeds.

At stroke of a pen, driving 70-75 went from being legal to hugely ticketable. Not only that, either. Getting a ticket also usually meant getting a “surcharge” – the term used by the insurance mafia to justify increasing the amount of money you were already forced to pay in order to be allowed to drive, at all. In addition to whatever the court made you pay.

This lasted for almost 20 years, until the NMSL was finally repealed in 1995.

Immense damage was done during those 20 years – and not just to the wallets of American drivers, not one of whom was ever issued a refund for all those “speeding” tickets that were issued for driving at speeds that had been legal prior to the imposition of the NMSL – and which were (just like that) decreed to be legal, once again. The insurance mafia wasn’t made to return any of the “surcharges” it charged, either, when all of a sudden it was legal to drive 70-75 again.

The total transfer of wealth from the driving public to the government-insurance apparat probably runs to the several hundred millions of dollars. 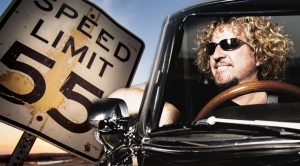 But the real damage was psychological.

Initially touted as a fuel-saving measure, the NMSL quickly assumed the mantle of a saaaaaaaaaaaaaaaafety measure. Very much of a piece with the recent rituals involving the wearing of the Holy Face Diaper. Then as now, the public was cleaved into two groups. The first saw through the sham – and refused to shoulder the shame. The people in this group knew that they weren’t in the wrong for driving 70-75 on the same roads that it was legal to drive 70-75 on before the NMSL made it illegal to drive those speeds. They knew it was wrong to punish people for driving the previously legal speeds and came to resent the cant used to justify it.

They also understood that it accelerated the corruption of a system already waist-deep in it. Speed traps may have been around since about the time of the Model T, but now – thanks to the NMSL – practically everyone was a “speeder” by dint of speed laws that practically everyone ignored because they were almost impossible to obey. This including the cops who manned the speed traps. 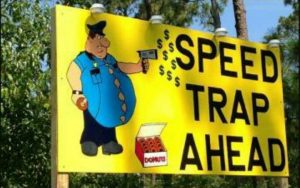 The highways were designed for average speeds around 70-75, back in the ’50s. To drive 55 in the ’70s was like shuffling rather than walking. It was excruciating – but very profitable.

Cops – whom the public generally respected, before Drive 55 became the law of the land because cops – for the most part – didn’t hassle people who weren’t asking for it – came to be viewed with justifiable contempt as little better than highwaymen, with the only difference being they held you up on behalf of the government (and insurance mafia) who paid them to do it.

Using the money they just held you up for, adding insult to the injury.

Speed limits, too, came into general disrepute – having lost any informational value to motorists not familiar with a given road. Everyone understood that speed limits were political totems, to be obeyed only when one suspected a speed trap might be in operation.

The other group bought the lie – and began to sing the mantra.

The NMSL brought the Safety Cult into the mainstream. Transformed neurotic ninnyism into a national religion – enforced at gunpoint. And something much worse than that. It legitimized neurotic ninnyism. The repercussions of this extend to the present day and manifest in the general neurotic ninnysim that made it so easy to get so many people to don the Holy Face Diaper.

Granny might die! being essentially the same ululation as speed kills!

These people will probably be happy to Drive 55 again – or even slower – since it will appeal to their fetish to signal their virtue. It will be interesting to see how well modern cars with as many as three overdrive gears (and almost always at least two) shuffle along at such speeds.

And the government will be happy to use that rancid desire to signal virtue to do more than just get people to “slow down” – for saaaaaaaaaaaaaaaaaaafety! This time – unlike last time – we might find ourselves not allowed to drive any speed, at all. To “save the planet.” No go on certain days, perhaps.

This, by the way, is something readily enforceable if you happen to own a Tesla.

You may have missed it – because it was quickly purged – but for a day or so there was an article up that urged ElonMusk to shut down all the Teslas in Russia. Think about it, a little – instead of being told what to think about Keeeeeeeeeeev!