Supposed Libertarian Rand Paul is advocating increasing the age of eligibility to receive SS benefits (article follows below). In other words, screw over (again) the younger generation that has been paying (and will continue to pay) the highest SS taxes, for the benefit of the old febes drawing SS today – the febes who typically paid very little into the system relative to the benefits they draw. Keep in mind that SS taxes were very low until the 1980s; today, the total tax is almost 15 percent – on top of federal and other taxes. People in their 40s and younger today will pay enormous sums into the system and are assured of not even getting back what they paid in (given inflation, what they might have done with the money had it not been taken from them; the fact that they will likely die long before recouping a fraction of what they paid in).

Paul – the supposed Libertarian – said nothing about letting the younger generation opt out of SS – which many of us would love to do, even to the extent of agreeing to forgo all future benefits in return for not having to “contribute” any more from here on out.

Just pay more – and get less.

He’s turning out to be another Republican. “Privatize” everything – so the shyster class can make a buck. Do nothing about ending (or even challenging) the system of intergenerational parasitism we suffer under.

But Paul, speaking during the first televised debate of the general election season with Democratic opponent Jack Conway, said he doesn’t want to change those benefits for older people already receiving them. The debate was aired on “Fox News Sunday.”

“But we do have to admit that we have the baby boom generation getting ready to retire, and we’re going to double the amount of retirees,” Paul said. “And to put our head in the sand and just say we’re just going to keep borrowing more money is not going to work. There will have to be changes for the younger generation.”

Major issues of the race thus far have been spending, taxes and the size of government.

Paul is a favorite of the tea party with his positions for smaller government and a balanced budget. Conway, the state’s attorney general, has also appealed to conservatives, describing himself as a fiscally responsible Democrat who understands why voters are frustrated about rising federal spending.

Paul and Republican leaders have tried to paint Conway as a clone of the Obama administration.

Conway said Sunday that he would have supported “some” of President Barack Obama’s initiatives, including the health care overhaul. He said he would have voted against a $700 billion bailout program for troubled financial institutions that was started under President George W. Bush, a Republican.

“There was not enough accountability in them,” he said. “We had people getting bonuses after getting the bailouts.” 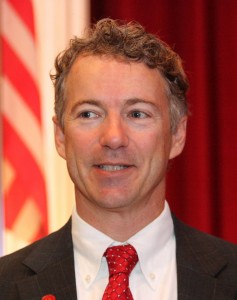