America’s Big Three have had more than their share of bad ideas over the past 20 years.

This car snuffed what had been a successful franchise for Ford. In the ’80s, the Mark VII (http://www.lincolnsofdistinction.com…ark-vii-02.jpg) was thought of by many as an American take on the Mercedes-Benz SL500. Like the big Benz, it had the substantial look of a lead ingot carved with the precision of a laser beam. It was powerful, too. The car shared the same basic drivetrain used in the same-era Ford Mustang GT, including its High Output 5.0 V-8. It also had an air-adjustable suspension, bolstered euro-style sport buckets, a full gauge package and was one of the first American-brand cars to come with high-capacity four-wheel-disc brakes with ABS. The thing sold very well … until Ford restyled it for the 1993 model year and christened the result the Mark VIII.

This car looked like a Mark VII that had been left in the oven too long.

Even though it had a much more powerful engine (Ford’s new 4.6 liter “cammer” V-8 with 290 hp in the top-of-the-line LSC) its pulling power with buyers was far weaker than the old 5.0 powered Mark VII. After five listless years and ever-declining sales, Ford dropped the Mark – and dropped out of the luxury sport coupe market completely.

Which brings us to our next contestant…. .

An icon was revived (briefly) that was greeted (initially) with lots of enthusiasm but which quickly became a horrendous money-loser for Ford – mainly because most people simply weren’t willing to spend nearly $40k for a car that was “just” a Ford. Dealer gouging for the first cars off the line made it even worse. http://www.ridelust.com/wp-content/u…ue-top-off.jpg

Some industry analysts argued in their post mortems that the car might have done better had it been sold through Lincoln dealers. The thinking being that high-end customers expect a high-end dealership experience and the status that comes with a perceived “luxury” brand – which of course, Ford was not. And there was probably something to that. Of all the big bucks coupes out there, only Chevy gets away with selling $50k Corvettes through the same outlets that also sell $11,000 Aveos. But the Corvette can get away with it because it’s an icon with a strong market presence that’s largely the result of an unbroken history going back to the 1954. The ‘Vette never went away. By the time Ford brought back the T-Bird, no one – or at least not enough people to make the nut – cared anymore.

But probably even more lethal than trying to rebuild a long-dead franchise was the latter-day ‘Bird’s personality. While other modern cars have dabbled with “retro” design, the T-Bird really was retro all over. It seemed to be built for laid-back cruising – something almost no one does anymore. We live in a frantic, aggressive, stressful world. Few of us take our time doing anything – let alone driving. The latter-day T-Bird* was a joy to take out on the Blue Ridge Parkway or Skyline drive and amble along at 45 mph enjoying the scenery.

But it didn’t feel right anyplace else.

As a time machine, it was brilliant. Unfortunately for Ford, most buyers weren’t looking for a $40k trip down memory lane.

Who needs a $50k pick-up with a functionally useless bed? http://www.seriouswheels.com/pics-jk…oncept-bed.jpg

Apparently, next to no one.

Lincoln’s uber-luxury pick-up fell through the thin ice faster than a jumping up and down Oprah. It lasted just one year in production – a measure of the disastrous decision to build the thing in the first place.

The problem wasn’t price; after all, Ford had no trouble selling Navigator SuVs for just as much. But unlike the Navigator, which could so some things, the Blackwood was useless for anything other than proving that rich people can be just as dumb as everyone else.

Or maybe not – because this time, even the rich said no thanks.

The short bed was never intended to carry any of the stuff that pick-ups usually carry. Carpet, fine wood paneling, LED track lighting abd brushed metal trim don’t exactly mix with stacks of 2x4s or bags of cement – or even a wet Labrador Retriever. That’s if you could access the bed at all. To do that, you had to raise a clumsy, power-activated tonneau cover that further limited the already minimal usefulness of this “truck.”

The piece de resistance? The Blackwood was sold as a 2WD only – making it the only full-frame, full-size truck which couldn’t even be ordered with 4WD.

Nothing like a 15 mpg, 2WD truck that can’t carry or tow much and which is more skittery in snow than a ’78 Caprice Classic with bald tires and an open rear end.

Just keeping Mercury around is arguably one of Ford’s biggest mistakes of the past 20 years.

Thirty or forty years ago, it made sense for Ford to have a “mid-level” brand – just as GM had Buick and Pontiac. Buyers often spent their entire car-buying lives within the Ford Family of Fine Cars, moving from Joe Sixpack Fords to almost-luxury Mercurys – and from Mercury to Lincoln, if they became successful enough. But that was before the flood of Japanese imports reduced Ford Motor Co.’s share of the American car market by more than half – and before buyers routinely switched brands if they found a better car somewhere else.

The last Cougar (http://www.wildlifephotohunts.elikir…ury_cougar.jpg) was at least a unique model – unlike the previous versions, which began life in the ’60s as tarted up Mustangs and went through the ’80s as rebadged Thunderbirds. It actually wasn’t a bad car; it’s just that it wasn’t an especially great one. Many saw it as a girl’s car; others weren’t sure about its iffy styling.

Even Ford seemed unsure what to do with it.

In V-6 form, it offered decent get up and go, but Ford never developed it further. A performance-themed “S” version with a high-output engine and sport suspension was considered – and might have given the car some bona fides – but it never got released. So the Cougar just sat there, unsure of itself and without a real reason for its existence.

A hugely successful automaker such as Toyota can get away with some soggy offerings (for example, the ungainly Camry Solara) by dint of the vast pool of loyalists who just want a “Toyota” … any Toyota.

But Mercury hasn’t got that kind of pull – and the cat that no one wanted was put to sleep after the 2002 model run.

This one’s upsetting because the LS* had real potential. It might even have saved the brand – which today (late 2010) is on the verge of total collapse.

Arguably, the LS (http://www.stangbangers.com/02_LincolnLS_Pic.jpg) was the best sedan Lincoln put out in 25 years. But the management eggheads decided to drop it instead of correcting the few relatively little (and easily fixable) things that were actually wrong with it.

The LS sedan was Ford’s attempt to build a credible rear-wheel-drive luxury-performance sedan comparable to a BMW 3-Series. And it was credible – right down to its available manual transmission and trunk-mounted battery. Handling was excellent; ride quality very close to the best German sport sedans. Buyers could choose a punchy 252 hp V-8 if they sought more power than the 210 hp 3 liter V-6 offered. This engine was sourced from Jaguar’s “AJ” series V-8 and had both the power and the sophisticated demeanor to stack itself up against the very best Euro powerplants of the era.

As a driver’s car, there was little to fault. The LS could corner; it had high-speed legs. It felt good when pushed. Motor Trend gave it “Car of the Year” honors its first year out. And yet, it failed.

Partially, a clash of car and brand – and buyer. Lincoln, as a brand, was not BMW – even if the LS, itself, was a credible BMW in training. Lincoln buyers were (and still are) mostly Blue Hairs and Bob Dole types who want soft seats, wire wheels and automatic transmissions. The typical Lincoln customer had about as much interest in a sport sedan like the LS as* Clay Aiken has in Pamela Anderson.

And BMW buyers weren’t crossing over, either.

The LS did have some flaws, too – in the cabin department especially. The layout and materials rose to the mediocre. While the handling/driving dynamics were good enough to play with the Bavarians, the interior was Wal Mart all the way.

Still, it was a damn good first effort – and given persistence and fixes where needed, Lincoln could have made a go of it. That’s what a Japanese car company would have done (Lexus too was laughed at initially; no one’s laughing now – least of all Ford shareholders). But as is usual practice for an American car company, Ford just gave up. Lincoln went back to selling overstuffed old man’s cars – including the Zephry and MKS.

And those may turn out to the last cars Lincoln ever sells, too. 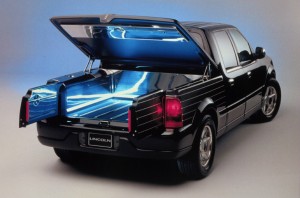