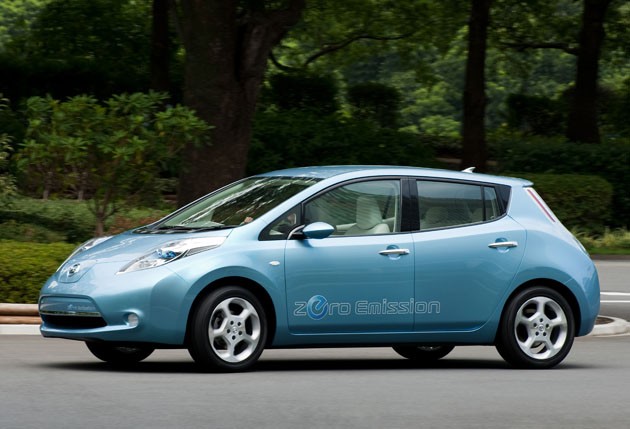 Electric cars make sense at amusement parks and golf courses – and on the road, if the road is mostly flat, it’s nice and warm out (but not too warm) you’ve got money to waste, don’t have to go very far (especially in winter) ad don’t mind waiting a couple hours before you can go someplace else.

The hype about electric cars is still years ahead of the actuality. If by actuality you mean an electric car that isn’t more compromised than Arnold’s political career. I remember covering the GM Impact/EV back in the early ’90s, almost 20 years ago. Most of the press swooned; a few Californians bought (well, leased) them. Some even liked them (that’s California for you and also because California doesn’t have winter; more on this below). The car was a money pit for GM, despite all the hoopla and the government kickbacks.

Cut through the farrago of Happy Talk and the real-world boondoggle’s still the same. The range of the latest electric cars is said to be better. But it is always couched in the ubiquitous marketing con, “up to.” And under ideal conditions.

Your actual mileage will vary.

Consider the Nissan Leaf. On a full charge, Nissan touts a a 100 mile range. It doesn’t tout what the range will fall to when it’s 16 degrees outside and the capacity of the Leaf’s battery declines by “up to” 20-30 percent, which it will as all batteries do when it is very cold out. Now add the additional load on the battery to power things like the heater/fan – and the lights, which you will probably need when it’s dark outside.

There are other forms of loading, too. Passengers and Stuff. Everyone knows that a gas powered car goes slower and burns more fuel the more it’s loaded down with passengers and cargo. The electric car is not immune from the same physical laws. Add a few hundred pounds of weight and it’s going to need more energy to do the same work and that means more draw on the battery, which will mean reduced range as well as reduced performance.

Summer’s not so hot, either – as far as optimizing an electric car’s range. You’ll probably want to run the air conditioning, which will draw power from the battery pack. And high heat can be as unkind to batteries as bitter cold.

So, let’s say the real-word range of a car like the Leaf is 60-ish miles under less-than ideal conditions. That is, in the real world. That might work for close-in commuting. But it could be an uncomfortably close shave if you live in the ‘burbs, 20 or 30 miles out.

At least with a gas-fueled car, you can refill the tank in a few minutes and be back on your way. But when the Leaf runs out of juice, you’re not only looking at an hour or more downtime to induce a partial charge (a full charge takes several hours) you’ll need to locate one of the special 220V charging stations the Leaf requires. This EV does not just plug into any household 110V outlet. The 220V stations is faster – if you can find one.

The Chevy Volt at least addresses that problem by carting around its own portable (and gas-fueled) generator, so that when your “up to 40 miles” range on electric power alone fizzles out, you’re not stuck. The car’s gas engine kicks on, pumps juice into the battery, which then runs the electric motor – and keeps you moving. (The Toyota Prius plug-in hybrid operates on the same principle.)

Which is lovely except it concedes that gas power is still better than electric power because without that gas engine, the Volt (and the Prius) ain’t a goin’ no damn where – not very damn far, anyhow.

All this would be kind of funny in a latter-day Pinto kind of way except for one thing: The government never forced the taxpaying public to underwrite Pinto ownership.

Electric cars like the Leaf and Volt come with luxury car MSRPs – until Uncle Sam transfers about 20 percent onto the backs of you and me. The Volt’s MSRP is $40,280. The Leaf’s MSRP is $32,780. What lunatic would pay BMW/Lexus money for either of these things? The answer, of course, is only a few (well-heeled) lunatics of the posturing “green” variety – posturing because by definition, if you can spend BMW/Lexus money on a new car, worrying about the cost of gas is an abstraction. People who really have to worry about spending an extra $10 or $20 at every fill-up don’t buy $32k-$40k new cars. If they do, that’s why they’re having to worry about the cost of fuel.

So, enter Uncle – who is very generous with other people’s money. “Buy” a new Volt or Leaf or one of the other electric Turduckens now available and he will send you a check for $2,500-$7,500 depending on the model. Nissan even advertises the actual cost of its car After Uncle ($32,780 less $7,500) to make the thing seem more appealing.

In summary: The prudent fellow who buys a $15k (and 41 MPG) Ford Fiesta pays full freight but the “green” poseur who buys the electric car that goes maybe 60 or 70 miles before it conks out gets a $2,500-$7,5000 handout at the expense of people like the prudent fellow who bought the $15k Fiesta on his own nickel.

Welcome to the funny farm.

Reader Question: Mazda vs. Toyota and Honda… and Maybe Soobie?