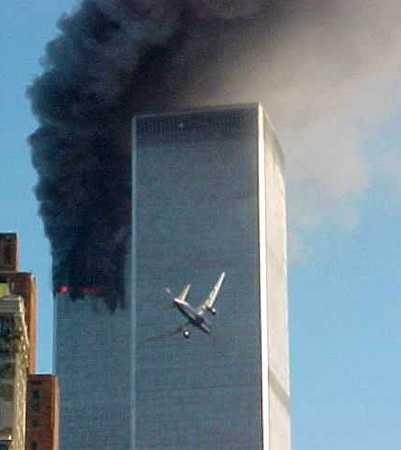 People who were there at the time of, say, JFK’s assassination will tell you they have distinct memories of certain moments that they will carry with them forever. It may be something trivial, like the dangling thread on the bright yellow jacket worn by the woman standing beside you. It may be something said – or something seen. But it imprints – and it sticks with you.

It is a small thing and may be something that stands out for entirely innocuous (or simply irrelevant) reasons.

But I have it, nonetheless.

First, some background. I was at the time an editorial writer for The Washington Times – you know, the Moonie-owned paper in DC that’s quite possibly a front for the CIA and is most definitely a mouthpiece for the neo-con right. (On the latter: There was a fax machine in the office that used every day to spit out “memos” from the now-infamous Partnership for a New American Century and Bill Kristol, which often became the basis for the following morning’s editorials. The Jerusalem Post was another favorite source for material.)

Well, later that morning, not long at all after the planes hit, I picked up on something that may be nothing – or might be something: The higher-ups at the paper were already using the lingo that’s still the lingua franca today. 911. Not, the attacks on the Trade Center – or something natural like that. Just the now-familar acronym-scree, 911 – like you used to say when you talked about calling the cops. I though it odd then and I still think it odd today, a decade later. How is it that 911 became coin of the realm so speedily? It was – to me – as though part of a very deliberate and carefully engineered PR program, prepared in advance and rolled-out on schedule.

911 has too much of the brand-name about it for my tastes – having done some copywriting, too, you see. Too much, at any rate, to have become so common so quickly. So almost instantaneously the agreed-upon terminology, like a parrot call.

How did this come about? What made so many people (well, people in a position to guide the discussion along certain channels) latch onto the date vs. the event itself?

What was so special about Tuesday, September 11?

Is it not odd?

Well, it was to me – still is. I don’t why my ears perked up, but they did. I kind of made a mental note to myself, then put it in the background of my mind as the day’s events unfolded. We – the editorial writers – were shocked and scared and busy as hell that day. No real time to think much more about it. There were more pressing things on the mental menu, such as What Next?

Besides, I may have been the only one thinking about it – the sudden appearance and equally sudden acceptance of 911 as the new shorthand for Everything. Perhaps I still am.

Well, so what am I trying to say?

I’m not really sure. I have my own suspicions about the events of that day. In particular, I have questions about one of the major events of that day that is almost never discussed anymore and wasn’t much discussed even then – the strange collapse of WTC Building 7. I don’t know what happened there, but I sure would like to know. I do know that on the one hand, we have been told that the Twin Towers collapsed because structural steel – steel specifically designed to withstand the impact of a four-engined commercial jet (Boeing 707) was weakened by a blitz of jet aircraft impact (which, crucially, blew away vital fire-protectant insulation) and the subsequent inferno caused by jet fuel, which softened the now-unprotected vital core supports, leading to the collapse. But then, on the other hand, we have WTC7 – which was not hit by anything other than falling debris, suffered no high-temperature jet-fuel-fed inferno, yet still pancaked to the ground in what sure looked to me like free fall.

It has not been explained.

Remember the lessons of 911!

Have question? Remember the lessons of 911! GWB and Rudy Giuliani and most Republican pols since then erupt like bullfrogs with 911! whenever it’s clear no discussion – and certainly no questions – are wanted. We can’t forget the lessons of 911!

It has been thus ever since that day; for me, no more than two or three hours at the most after the first plane hit.

I wonder whether we’ll ever find out.

Would You Buy a Used Car From This Man?