Not everyone is going small . . . under the hood, that is. 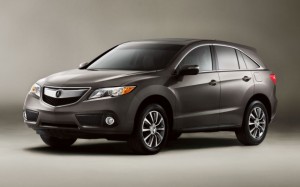 Surely, this means trouble – for Acura. With the Feds. Two more cylinders – and 33 more hp – has to equal fewer MPGs.

Ok, so what’s the catch? There’s always a catch. It’s there – but it’s one most buyers will probably notice less (if they notice it at all) than they will the improved MPGs – and the improved straight-line performance. 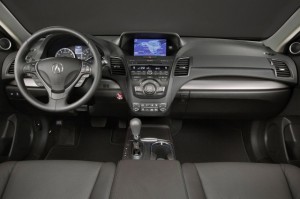 I’ll tell you about in a minute.

The RDX is Acura’s entry-luxury compact crossover SUV – in the same general class as BMW’s X3, the Audi Q5 and Infiniti EX, among others. It comes standard with a 3.5 liter V-6, six-speed automatic and FWD. AWD is available optionally.

A top-of-the-line RDX with AWD and the Technology Package – which includes GPS and a 10-speaker premium audio system with 15 Gig music storage hard drive – stickers for $39,420. 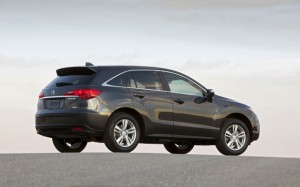 A little bit bigger on the outside – and a bit more roomy on the inside – than before.

’13 RDX just has basic all-wheel-drive. Just like everyone else.

Price bump of about $2k vs. last year.

Only a six-speed – vs. the seven (and eight) speed transmissions now common in this segment.

In a way, the previous RDX was more like many of the latest (newest/most recently updated) RDX competitors – including the 2013 BMW X3 and the Audi Q5. Like them now, it was four cylinder (and turbo) powered then. Unlike them, though, the old RDX’s 2.3 liter turbo four was pretty horribly fuel inefficient: 19 city, 24 on the highway – and that was the FWD version. The AWD-equipped version of the previous RDX swilled it down – swilled premium fuel down – at the appalling (for a four cylinder engine) rate of 19 city, 22 highway. 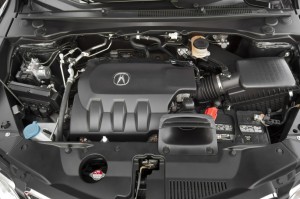 Acura had to at least match this efficiency – not just to placate consumers, but also to placate Uncle Sam. The federal government has decreed that all cars will achieve 35.5 MPG within a few short years. The stats of all these contenders still fall short of that mark, of course. But maybe the effort will make Uncle happy… for now.

What’s interesting is the way Acura approached the need to make the new RDX more economical. Instead of the turbo four, the new RDX has a naturally aspirated six – with cylinder deactivation technology. Under light-load conditions (for example, cruising along in top gear at 60 MPH) two of the big six’s cylinders stop burning gas – so you use less gas.

The 3.5 liter engine also produces 273 hp – more than any direct competitor except the Infiniti EX35 (297 hp) while being  significantly more fuel-efficient. 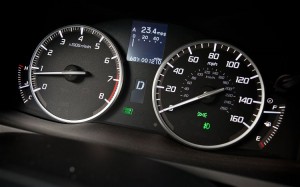 It rates 20 city, 28 on the highway with FWD and 19 city, 27 with the optional AWD. This easily beats the hydrocarbon hungry Infiniti EX (17 city, 24 highway) and matches the BMW X3 and Audi Q5, while giving you more power – and better performance – than those two.

Another thing that’s changed is the RDX’s optionally available all-wheel-drive system. It is no longer a super handling all wheel drive (SH-AWD) system. Just plain old AWD. What does that mean? It means engine power is routed to pairs of wheels, front to back – with the system operating most of the time in front-dominant mode. Some power gets picked back to the rear wheels when the front wheels begin to slip, in order to improve traction on slick surfaces. But most of the time, most of the engine’s power is being routed to the front wheels. 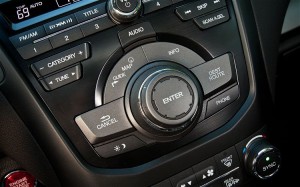 With the old SH-AWD system, the power flow could be routed to individual wheels – and the system was set up to mimic the handling feel of a rear-wheel-drive vehicle. It was designed as much (or more) for high-speed cornering on dry pavement as it was meant to provide a traction assist during normal, everyday driving in the rain or snow.

Result? The ’13 RDX is a more practical vehicle – but it’s not as performance-minded as it used to be.

More on this below.

Surprisingly, the RDX’s max tow capability is just 1,500 lbs. I say surprising, because with a brawny V-6 up front, you’d expect the vehicle to be able to handle more out back. 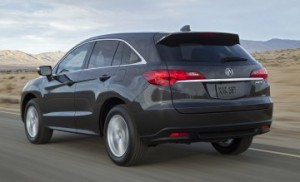 How do you define performance?

If you define it mainly in terms of acceleration – especially seat-of-the-pants feel when you’re trying to merge or overtake – you’ll like the new RDX more than the old RDX. It’s not just that it’s noticeably quicker in a pedal-to-the-metal drag race. It also feels stronger in everyday, part-throttle driving.

In the old RDX, you had to work that little turbo engine to access its power, which peaked – under boost – at 6,000 RPM.

The ’13 RDX’s V-6 engine – which is almost twice the size of the old turbo four – has better low-end, part-throttle pull – and without the peakiness and sudden surging of a higher-strung turbo engine under boost.

This makes it a great everyday driver for the typical driver. 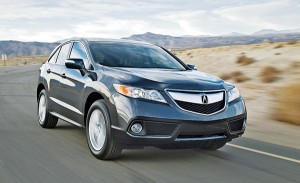 But drivers who define performance in handling terms as much as straight-line acceleration terms may be a little disappointed with the changes. Especially, the absence of the formerly available SH-AWD system, which gave the old RDX high-speed cornering capability as tenacious as rear-drive-based sport ‘utes like the BMW X3 and Infiniti EX35.

The suspension’s still quite capable, but the onset of tire squeal happens sooner, at lower speed – and you can’t power-steer out of a corner like you used to be able to with the SH-AWD system doing its thing.The new model also sits considerably higher off the ground – with 8.1 inches of clearance at its lowest point vs. 6.3 for the old RDX. This will be helpful in the winter, but doesn’t help you much in a high G corner.

In brief, the ’13 RDX is set up more like – and so behaves a lot more  like – other FWD-based crossover SUVs – and less like a rear-drive-based unit such as the BMW X3 or the Infiniti EX, both of which will appeal more to the enthusiast-minded buyer.

Acura chose to make the RDX more mass-market, which it probably needs to be in order for Acura to sell more of them. 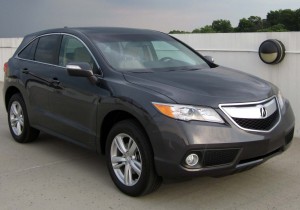 Though the new RDX is arguably less actually sporty in terms of driving dynamics than its predecessor, it certainly looks sportier. The windshield rake seems sharper, the roofline lower. A sharper “v” taper of the rear quarter glass adds to this effect. Up front, the headlight eye slats are narrower and taper back farther, the chin is pointier and the lower grille openings are both lower and wider – but not as tall. The signature pewter grille bar remains – it’s just stretched out a little relative to last year. 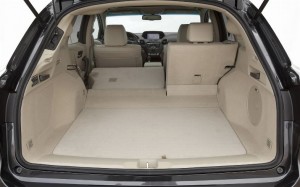 The BMW X3 is considerably more spacious, headroom-wise (40.7 inches up front and 39.1 in the second row) but has a more cramped second row, in terms of legroom (36.8 inches). The Q5 falls in between these two – with a bit more headroom (39.4 inches up front; 39 in back) than the Acura – but less than the BMW – and backseat legroom (37.4 inches) that’s better than the BMW but not as generous as the Acura’s.

One other competitor, the Infiniti EX, has an excruciatingly tight back seat relative to all these models – with only 28.5 inches of legroom. 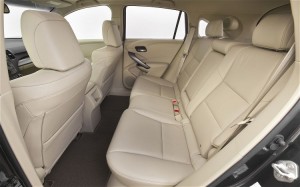 There’s also about 17 cubic feet more total cargo capacity than before – 76.9 cubes vs. 60.6 cubes – another bow to everyday practicality.

One other thing: The RDX’s steering wheel’s tilt adjustment range is pretty limited – and it’s a manual deal. You have to release a catch under the column, position the column where you want it to be, then lock the catch. It’s a little surprising to find a manual adjuster in a vehicle in this price range. However, the ’13 now offers both a power rear liftgate and remote/keyless ignition – two higher-end features the old model didn’t have. 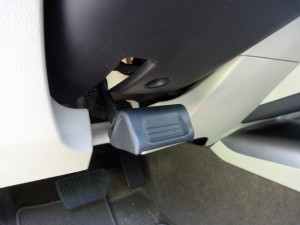 Whether for ordering convenience – or to extract more money from buyers – Acura (like many automakers) bundles major individual options into take it or leave it packages of options.  So, if you want the power liftgate, for example, you’ve got to buy the Technology Package – which also includes foglights, Xenon headlights, the GPS navigation system, solar-sensing climate control and the upgrade 10-speaker ELS surround-sound audio system. All of which is nice to have. But all of which also adds about $4,000 to the price tag. If you wanted just the power liftgate – or just the higher-end stereo – you’re stuck paying for all those other things you may not have wanted, too.

Again, Acura’s not the only car company that does this. That doesn’t make it less obnoxious.

For most buyers, the disappearance of the spunky – but peaky (and thirsty) – turbo engine and the high-performance SH-AWD system will not be mourned. Long-term upkeep costs will probably be less, too – if only because there are now fewer things that could possibly break or wear out. 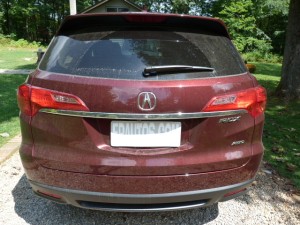 The new – and milder – RDX may be something of a disappointment to the road-racy set – but Acura knows the middle-of-the-road is the sweet spot when it comes to selling metal.

And ultimately, that’s the only bottom line that matters.