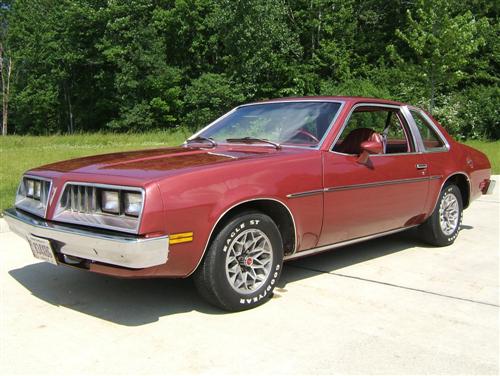 I’ve begun noticing a lot more older cars on the road. And they are not headed to an antique car show, either. Almost every day, on my way into town, I pass a guy driving a mid-70’s era Pontiac Sunbird. Then there’s the other guy with the orange and brown Pinto. I see him at least once a week. And lately, I’m encountering Old Beetles seemingly all the time. There was a bright yellow one pulling into Starbucks just this past Sunday; a silver one (a Super Beetle) was at the gym today.

People are beginning to revolt. No, wait. Revolt is not the right word. People are opting out.

Own an old car – and by “old” I mean something that doesn’t have a computer, which means built before about 1981, the first year computer controls became common – and you do an end-run around Big Brother. Or at least, you run between his legs and make good your escape before he can grab you.

Generally, you won’t have to deal with emissions tests (and the fees that come with emissions tests). In most states, vehicles over a certain age – or built before a certain model year – are exempted from emissions testing. The usual standard is 21 years or older – or built before 1967, the first year for the first very primitive emissions controls. Even if you do have to submit to emissions testing, the “pass” standard is much lower because it’s based on the standards in effect at the time of the car’s manufacture, which were orders of magnitude less stringent than now. It’s usually just a matter of adjusting the carburetor or ignition timing – or putting in a new set of spark plugs.

Minor maintenance may be necessary more often with an older car, but it’ll usually be fairly simple and inexpensive. Stuff an average person can deal with on his (or her) own, with basic hand tools, a manual and a little gumption. Contrast that with the feeling of impotence that envelops you when a modern car just… stops.  Or that “check engine” light comes on. Sure, you can have the computer “scanned for codes” – but what do the codes mean? Stuff begins to get complicated – and beyond the skills (and tool set) of the average person.  Hello, Mr. Dealer – and $70 per hour shop rates.

When you drive an older, non-computer-controlled car, you can wave good-bye instead.

Other things you can say good-bye to include annual registration fees (in states that have “antique vehicle” tags, which unlike standard car tags are often permanent and don’t ever have to renewed), high insurance premiums (buy a cheap, liability-only policy) and personal property taxes (in states that have them). But most of all, you can wave good-bye to a monthly car payment – and cut your transportation costs to the bone.

$10,000 or so can buy you an excellent condition old car from the ’70s, provided you’re not shopping for a car that’s (currently) collectible, such as a Camaro or Mustang. $5,000 or so will usually get a nice driver – mechanically sound and looks good, too.

That Pontiac Sunbird I mentioned in the beginning of this article was for sale locally. Asking price? $4,100. Old Beetles in solid mechanical and cosmetic shape are available for about the same coin, at least in my area. Good places to cruise for inexpensive old cars that would make for great daily drivers include Craigs List and your local Auto Trader publications. About three years ago I almost bought (and regret not having bought) a mint condition, one-owner 1974 Cadillac Fleetwood Brougham d’Elegance. Chocolate Brown metallic, 500 cubic inch V-8 under the hood and more room inside than a new Mercedes S-Class. For $3,500. The brown shark may not have had air bags, but it did have mass. And sure, it drank gas – but so does a new S-Class. And the gas guzzler tax alone on the S-Class is about as much as the cost of the old Caddy itself.

These old cars – if they’re factory stock – are also immune from EMPs (electromagnetic pulses, which fry modern transistorized electronics) which is an issue not just for SHTF-type scenarios. There are devices now in service with “law enforcement” that generate a mini-EMP in order to disable individual cars. A pursuing cop pushes a button, sends out the EMP device and your car is toast. Of course, no one in this free country  should ever have any legitimate reason to want to flee from a cop… .

But, the bottom line isn’t that people are going loco – they’re just opting out of all the rigmarole. Since they can’t buy a new (or recent vintage) car that doesn’t have a computer nanny under the hood (and Big Brother riding shotgun, too), air bags and all the rest of it, they’re doing the only thing they can do, which is buy something old that hasn’t got all that stuff.

Which is why it likely won’t be long before the government puts an end to it somehow. Probably by announcing that cars built before a certain year, that don’t have computer controls, are “not safe” and so no longer legal to operate on public roads. When I was a kid, I used to listen to the rock band, Rush – and their song, Red Barchetta.

Tomorrow, it could very easily become our reality.

So: Go old while you still can.