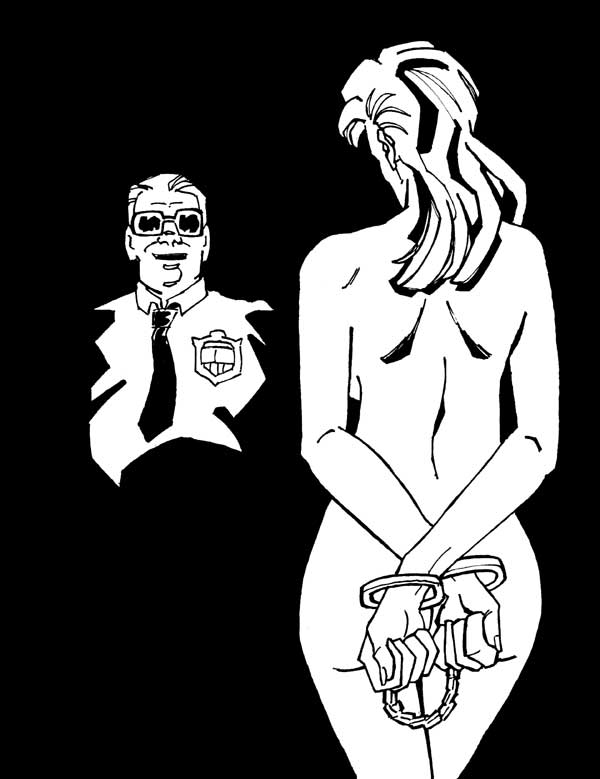 This one registers a solid 10 on the Creep-o-Meter:

A woman (I’m leaving her name out on purpose) was recently pulled over for “speeding” by Chicago cop, Chris Collins. The cop issued her a piece of payin’ paper, but apparently that was merely foreplay. Collins later did a search for the woman’s home address in the state motor vehicle database, then went to her home and left a note on her car asking her out on a date.

Here’s some of the actual text, first published after the AP got hold of the court documents:

“It’s Chris … that ugly bald Stickney cop who gave you that ticket. … I know this may seem crazy and you’re probably right, but truth is I have not stopped thinking about you since. I don’t expect a girl as attractive as you to … even go for a guy like me, but I’m taking a shot anyways.”

Drew Peterson, you’ve got an amigo!

Not surprisingly, the woman was extremely creeped out by all this – which she not unreasonable construed as mildly threatening in addition to being extremely invasive of her privacy. In her lawsuit, filed shortly after finding out she was being cop-stalked, she described the “great fear and anxiety” the situation caused her and that she felt she was being “manipulated” by Collins into some sort of sick, force-fed “relationship” with a person who is probably someone she had hoped to never see or have to deal with again.

The story is interesting on several levels  because it gives us insight into the cop mindset. For one, it shows us that some cops don’t realize how menacing they are to non-cops. That being confronted by an armed, costumed man anointed with literal life-or-death powers is not pleasant. The obliviousness to the gross inequality of the power relationship (the cop has all the power; his captive, none) is disturbing. In a bar, a woman can turn on her heels and walk away from a suitor she’s not interested in. But this woman had no such option – and more, was under extreme pressure to be compliant and submissive. To pretend she didn’t loathe Collins, because Collins had a badge and a gun and state-sanctioned power to impose punishment at his whim.

Then there’s the matter of Collin’s contempt for the privacy of his intended paramour. His egregious violation of (supposedly) private information. To all who dismiss the concern many people have about giving the government open access to our private information, here is why.

And more: Does anyone doubt that such things are routinely done by those with access to our private (cough) information? This cop easily found out where his prospective “date” lived and felt no compunction about going there, without even a flimsy official excuse for doing so. It reminds one of KGB cretins such as Lavrenty Beria, who had a special liking for the nubile daughters (and wives) of his political targets. Come, step into my office. I see you are the daughter (or wife) of Comrade Smirnoff. Perhaps you can help me… .

In this case, no obvious threat was made. But threat is always implicit in any interaction between a cop and a Mundane. That’s the point here – and the reason for the 10 on the Creep-o-Meter. This woman had to fear that declining the cop’s advances might result in consequences.

It is an entirely reasonable fear.

And who would she file a complaint with? Other cops? That saying about foxes guarding hen-houses comes to mind… .

Probably there will be no meaningful repercussions for Collins. He will explain that he meant no harm; that he was just trying to be, you know, friendly.

Yet it goes without saying that if a non-cop performed this sort of stalking, the outcome would likely be very different. A non-cop hacks into the state motor vehicle database, acquires the home address of a woman and then shows up at her home, leaving creepy love notes for the poor woman to find on her windshield. End result? A felony bust and upon conviction, a likely (and deserved) tag as a sexual offender or at least, a known creep to be kept at several arms’-length distance.

But Collins will likely receive The Usual: A few days or weeks of “administrative leave” (that is, paid vacation) and perhaps a reprimand or demotion. The likelihood of him being thrown out of the cop shop for good – and perhaps thrown into prison  – is slim to none.

After all, “heroes” deserve special treatment.