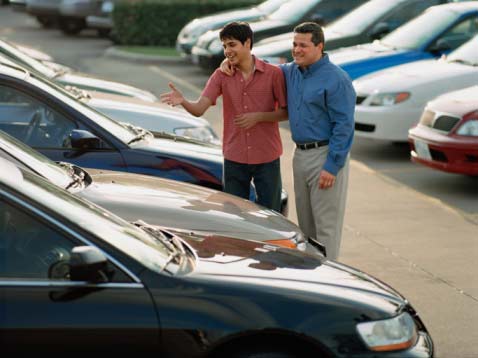 When buying a new car, it’s usually smart to let the salesman do the talking. Whatever you do, never tell him:

Ideally, let him think you need to be convinced. But whatever happens, don’t gush about the car. If you do, it’s like revealing your hand in card game before your opponent antes up. If the salesman knows you’re in love, he knows you’ve lost your most important edge. He knows your feelings are starting to over-rule your thinking and that it probably won’t take much convincing to get you to sign the paperwork. Sidestep leading questions asking how much you like the car and redirect the back-and-forth to the price of the car. Don’t discuss its looks – and even better, discuss the virtues of competitors’ cars. Your overall goal should be to convey the impression that while you’re interested, you’re not committed to this particular car – or even this particular brand (or dealership). This puts the onus on the salesman to try to convince you – and if you’re not responding on an emotional level, he’ll be forced to try to sway you on rational, logic grounds – such as the deal he can make you.

If you worry about becoming too obviously emotional, do your haggling remotely – via the Internet ( send offers via -email) or enlist your poker-faced spouse to do the talking.

* How much you can afford to spend –

Keep that card close to your chest. It’s ok to discuss a range – but don’t be overly specific. Never tell him exactly what you are looking to spend before you’ve even begun discussing the particular car you’re interested (let alone haggled over the price of that particular car).

Once the salesman knows your price point, he will try to steer you toward cars that cost about that much. But never less. On the other hand, if the dealer isn’t sure what you can afford or want to spend, he may be more inclined to show you some better deals.

* What you are currently driving –

Even if you don’t plan to trade, avoid discussing (or even letting him see) whatever it is you’re driving right now. Reason? The type of car you drive will give away information about you – and information is, as they say, power. If he sees you drive up in a high-dollar car, he will assume you’re a big fish – and try to hook you accordingly. And the type of car you drive will also convey information about the type of car you’re probably looking for. A sporty car, for instance, will convey that you’re an enthusiast driver – and the salesman will probably try to appeal to you on an emotional level. The bottom line is it does you no good to give the salesman anything to profile you by. Let him guess.

And keep him guessing.

* How little you know about the car –

Most people are not “car people.” They are thus vulnerable to being overwhelmed by a tsunami of helpful Facts and Stats recited by a trained salesman. His getting you to accept his authority as an expert about the car is the first step toward him getting you signing on the dotted line and buying the car.

It’s important that any questions you ask be informed and intelligent-sounding. You don’t have to be a “car guy” to be able do that. But you do have to spend a little time researching the make/model vehicle you’re looking at (along with competitor models) so that you know enough about it (and them) to not sound like a Mark when you start talking with the salesman.

If you’re totally clueless about cars, ask around. Almost everyone has a friend (or a friend of a friend) who is a “car guy.” Talk with them first. Get to know the car you’re interested in. Read up. Then, start shopping. And, again, you can do a lot of the back-and-forth online nowadays. This can be a godsend if you’re someone who just doesn’t like the pressure of a direct, right-now interaction. You can answer e-mails (and texts) at your leisure – after you’ve had some time to think about your answer.

Avoid any discussion about the monthly payment. It’s very easy for a clever salesman to get an unsophisticated buyer to focus on that Low Low monthly payment – soft-pedaling the total purchase price (and interest) he’s about to saddle you with. For example, by extending a loan from three or four years to five or even six years, the monthly payment can be lowered by a few bucks per month – but the actual purchase price may have been jacked up by thousands. You could be paying a lot more overall in unnecessary interest payments, too. This is how the mathematically challenged end up “upside down” – owing more in payments than the vehicle is actually worth.

Negotiate the purchase price first – and the monthly payment will take care of itself.

A common mistake some buyers make is to arrive at the dealer with their old car – and end up getting sucked into a discussion about its trade-in value before they’ve negotiated the price of the new car. It’s an old car salesman trick to make the buyer feel he has the edge by giving him what seems like a great deal on his trade – while making up the difference on the price of the new car. It’s also a timeworn technique to wear you down – and confuse the issue. One thing at a time.

If you plan to trade, it’s smart to avoid any discussion of what your plans are until after you’ve settled with the dealership on the sales price of the car you’re buying.

Then bring up your trade.