One of the biggest expenses that comes along for the ride when you own a car is replacing pieces of the car – especially small stuff like outside mirrors, grilles, headlight assemblies, tail lights (and tailgates, if you own a truck) and trim bits. No matter what make or model vehicle you’ve got, eventually – inevitably – something’s going to fall off or break off or get dented or broken or otherwise need to be replaced. 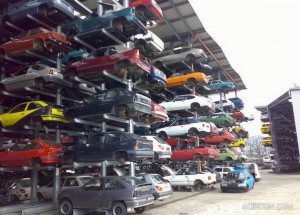 That’s when what I call Secondary Sticker Shock comes into play. With late-model cars especially, some of these parts – seemingly (and often actually) just “cheap plastic” – but cheap plastic you’ve got to have, such as an outside mirror – are anything but cheap.

Especially if you do the wrong thing – and go to the dealership looking for a new replacement part.

Now, new is fine – if you feel you’ve got to have new. This may be an issue if the car is new, or nearly new. But if the car is a few years old, then considering a part that’s also a few years old could be the way to go – because the used part will typically cost much less than the new part – and do the job just as well as a new part.

A few weeks ago, my wife went out shopping in our Nissan Frontier pick-up. When she got back to the parked truck, she discovered the driver’s side door mirror was cracked badly. Someone had clipped it in the lot – and left. 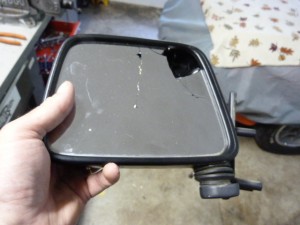 Now, I don’t know how much the Nissan dealer would have demanded for a new door mirror. But I’d bet you an oil change and a set of plugs the bill would have been a lot more than the $20 I paid at the local pick-your-part for a used – and perfectly functional and cosmetically identical to the broken original – replacement.

And I do know that I saved about $80 on the tailgate pull handle – which the Nissan dealer wanted more than $100 for new but which I got for $30 at the same pick-your-part place a few months prior.

What is a pick-your-part place? It’s a junkyard where you do the labor. There are hundreds, even thousands of wrecked cars out back. You tell them what you’re looking for – they check their computerized inventory – and if they have a donor vehicle on the lot that’s got the part you need, you agree on a price and then you go pick it. Some pick-your-parts will also pick the part for you – but then you pay a higher price. Probably, it’ll still be a lot less than what the dealer would charge though – and so, well worth doing if you prefer not to get your hands too dirty.

Parts such as door mirrors, grilles and so on don’t really wear out. They’re not moving parts – so the only wear issues are (typically) cosmetic. In the case of my Nissan’s door mirror, which is made of black plastic, the replacement used part’s plastic wasn’t as shiny as the plastic of a brand-new part. But then, neither was the also-used part it replaced.  In fact, had I bought a new part, the new part would have stuck out like the proverbial sore thumb. One side of the truck would have an obviously new mirror – the other, obviously older. With the “seasoned” used part installed, you can’t tell the difference. Both mirrors look about the same. 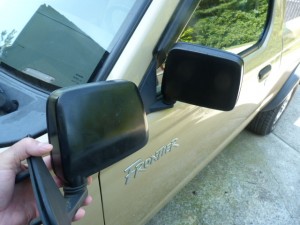 Other parts you can save a small fortune buying used include the complex (and car-specific) “headlight assembles” that have replaced the old generic headlights cars used to have. These fancy-shaped pieces of cheap-looking plastic can stun you speechless when you find out how much they cost – new. Two years ago, I hit a deer in the same Nissan truck mentioned above. The deer took out the passenger side headlight assembly – which cost more (new) to replace than the entire passenger side fender, which also had to be replaced. It was close to $200 – for a “headlight assembly”! I found the part used at the pick-your-part for a lot less. And the used headlight assembly also matched the other one still on the truck. If I’d bought a new one, the truck would have looked cockeyed – one obviously new (no small scratches, no light fading) headlight – one obviously older.

You can also usually find used replacement factory aluminum wheels (which are easily damaged, as many of you probably know from experience) for a third or less what one would cost you new. Ditto body panels – sometimes, even “pre-painted” in the right color! And with the trim bits/badges on them, too.

In fact, pretty much any part of your car could be replaced with a used part from a pick-your-part for much less than you’d have to pay for the same part new from the stealership.

How to find the pick-your-part? Just Google “used auto parts” in your area and several places ought to pop up. I’ve got two within 20 miles of me. Probably, you do, too.

Some of the simple stuff needs no tools – or very basic tools – to get off the donor car. Bring a few common screwdrivers (standard and Phillips), a socket set, some pliers and wrenches. Sometimes, the pick-your-part will allow you to use their tools. If you’ve already removed the part that needs to be replaced, you already know what tools you need – in which case, just bring those. 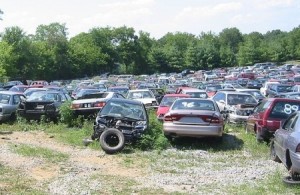 It may be a little more work than just going to the dealer. But when you discover how much you can save this way, you’ll probably agree it’s time (and effort) well-spent!