Lots of spunky compact runabouts out there. The inexpensive ones, though – like the $14k-ish to start Kia Soul – are usually on the slow-ish side. And the ones that aren’t slow – like the turbocharged Mini Cooper Countryman S – which starts at $25,350 for the FWD version are – expensive. 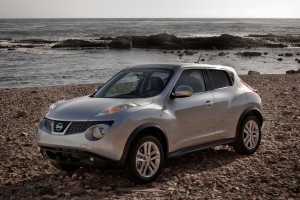 It comes standard with a high-performance turbocharged and direct-injected engine – and close to 190 hp –  for just under $20k. You can add a performance-calibrated “torque vectoring” AWD system, too – a feature not available at all with Kia’s Soul –  and still be looking at less than $22k, sticker.

The Juke’s got other things going for it, too – but that’s a pretty good start.

Few, if any, competitors exist that package all these things in one vehicle – and have a sticker price that starts at $19,990. 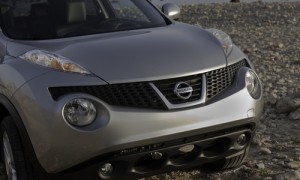 The earlier mentioned Mini Countryman is similarly sized and can be comparably fitted out – but it starts at $21,750 – without its optional (and Juke-equivalent) 181 hp turbo engine – or AWD. With those items, the Mini Countryman’s MSRP jumps to $27,050

The Juke was introduced as an all-new model last year, so the ’12 receives no significant updates or changes. 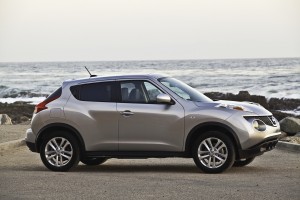 Some fussiness with the electronics (more on this below).

The Juke comes with a 1.6 liter four that’s the same size as the standard engine used in its economy car DNA donor (the Nissan Versa) but much-modified to produce a very healthy 188 hp. The little engine is direct-injected and turbocharged to provide on-demand power but good fuel economy (27 city/32 highway for the FWD/six-speed version) when power’s not being demanded.

Depending on the transmission – you can choose either a six-speed manual or Continuously Variable (CVT) automatic – the Juke is capable of getting to 60 in about 7.3-7.4 seconds. 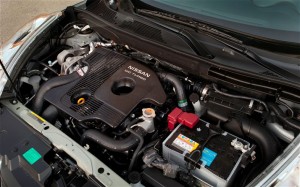 The 2012 Mini Countryman, meanwhile, also comes standard with a 1.6 liter engine and six-speed manual transmission – but it’s not turbocharged (unless you pay extra for it) and in non-turbo form makes only 121 hp. So equipped, the standard-issue Countryman needs about 10 seconds to heave itself to 60 – making it one of the slowest new cars on the market. You can of course add a turbo to the Mini’s 1.6 liter engine and even things up (well, almost) to 181 hp but even then, the Mini can’t catch the Juke, 0-60 (it needs about 7.5-7.6 seconds, depending on whether it’s FWD or AWD).

And you’ll be out of pocket about $3-5k more, relative to the cost of the Juke, to upgrade the Mini to the turbo version of its 1.6 liter engine.

The Juke, as mentioned above, also offers AWD for much less coin than it costs in the Cooper. And of course, AWD is not available at all in the Kia. 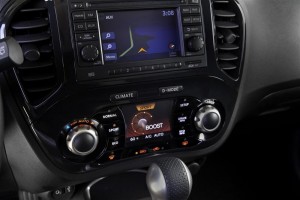 There’s a graphic display in the instrument cluster that tells you where the power’s  being routed as you drive. You can also select Normal, Sport and Eco modes via buttons located on the lower portion of the center stack. Each setting is accompanied by a different graphic display, too – including turbo boost, torque output of the engine and (in Eco mode) a bar graph showing in real time how your driving is affecting your MPGs.

A “Juke joint” is a honky-tonk bar; a place that’s hip and fun – and potentially wild. The four-wheeled, horned toad-looking Juke lives up to its name – unlike some embarrassingly over-named cars whose names I won’t mention. Well, ok. I will mention them. Well, one, just for fun: Dodge Nitro – available in Heat, Detonator and Shock trims. Please.

The Juke will jump when you need to jam. Close to 200 hp in a reasonable weight (just under 3,000 lbs.) package will usually do that and when the power is served up boosted, it’s usually even more enjoyable – which is exactly the case here. Also, either transmission works equally well with the little turbo engine – including the optional CVT (mandatory if you choose AWD). The turbo helps the Juke’s engine produce almost as much torque (177 lbs.-ft.) as it does horsepower and at lower engine speed (2,000 RPM) which results in a very everyday (stop and go traffic) drivable car that’s also a fun car to drive fast when the road opens up a little. 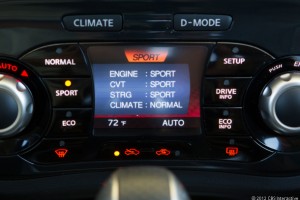 For some perspective, let’s take another look at the price-equivalent Mini Countryman, with its standard (and not-turbocharged) 1.6 liter engine. It not only makes 67 fewer hp, its torque output is much lower (114 lbs.-ft.) and you have to spin that poor little engine to 4,250 RPM to access it. The Mini is cute and has many appealing qualities but every day driving in traffic – and trying to pass anything, anytime – with that sad little 1.6 liter engine sans turbo is not among them. Now, the turbo S ALL4 version of the Countryman catches up to the Juke – well, almost – but the price difference is so big a side-by-side comparison’s not really fair.

The Juke also has some aces to play in the handling department. The optional AWD system, for example, is very much unlike the typical AWD systems in most competitor models. For openers, it’s part-time or full-time, at the touch of a button. Being able to operate in FWD when you don’t need AWD has two advantages over “always on” full-time AWD systems: You don’t burn as much gas because there’s less inertia to overcome when the AWD is off. Maybe not a huge difference, but even 1 MPG matters when gas costs $4 per gallon. Second, you are probably reducing wear and tear on components, which could extend their useful service life as well as lower down-the-road maintenance costs.

But there’s more than practicality to the deal. The Juke’s AWD system features what Nissan calls torque vectoring, which means the unit can route torque to individual wheels as driving conditions demand – for example, the outside rear wheel in a high-speed cornering situation. This much-improves maximum high-speed handling grip as well as predictability in a high-speed cornering situation. The Nissan system is similar to the performance-minded AWD systems used in pioneer AWD performance cars like the Subaru WRX – but here again, the Juke offers it for much less coin.

You can also toggle between the more aggressive torque vectoring mode and regular AWD (which is better for snow driving vs. high-speed dry weather driving).

Forward visibility is excellent, visibility to the side is good – and your rearview view is adequate. The up-high ride height helps you see more – and better, too. 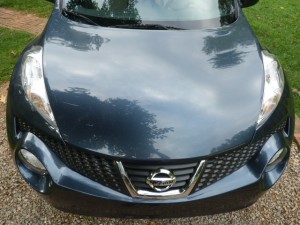 The horned toad front end – with its huge driving light “eyes” set wide and low; its lizard-like main headlight slits mounted almost on top of the front fenders . . . the chopped/slicked-back roofline. The pontoon fenders … you won’t lose this one in a parking lot. And there’s no mistaking it for anything else on the road.

Which I think is cool.

Functionally, though, there are a few objective downsides to this vehicle’s layout – most notably backseat room and specifically backseat head and legroom. The Juke’s 32.1 inches of rear seat legroom  is pretty tight (compare this to the 38 inches you get in the Versa – the car from which the Juke was spawned). Headroom’s also tight – 36.7 inches – which is the price you (or backseat riders, anyhow) pay for that stylish slanted roofline. 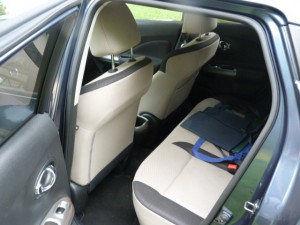 The Mini Countryman is better here – but not by all that much. It has 33.8 inches of rear seat legroom and 37.5 inches of rear seat headroom. Front seat headroom specs are about the same in both the Mini and the Juke: 39.6 inches of headroom for the Nissan vs. 39.9 for the Mini – but the Juke pulls ahead on front seat legroom with a commanding two inch lead: 42.1 inches vs. 40.4 for the Mini.

As far as total cargo capacity (second row seats folded) the Mini has more space – 41.3 cubic feet vs. 35.9 for the Nissan. But it’s not a game-changer difference – while (again) the yawing price difference between these two vehicles is.

The Juke has several unusual features you won’t find in competitors, including an optionally available driver-adjustable throttle calibration system (with display) very similar to the system used in Nissan’s GT-R supercar. With this system the driver can adjust other driveline parameters as well, including steering effort and (CVT-equipped Jukes) the shift action of the transmission. There’s also a G-meter (comes up when you’re in Sport mode) that displays lateral acceleration in bar graph form.

Although this is a modestly priced car, it neither looks it nor feels it. It definitely doesn’t drive it. 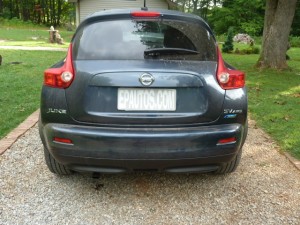 That same money won’t quite buy you a mid-trim Mini Countryman S with FWD. The AWD-equipped Mini S ALL4 starts at $27,050 – and it’s easy to price one up to $30k out the door. The Mini’s an appealing – and fun – car, But not an inexpensive car. 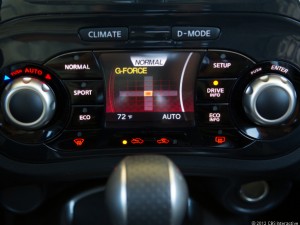 The Kia does cost less – and it’s also a fun – and interesting – car. But it’s not quick – and it can’t touch the Juke’s handling capabilities.

The bar graph displays are neat but convey only general info. For example, the “torque output curve.” It’s a literal curve, graphically displayed – but there are no actual numbers for such things as RPMs or torque produced at a given RPM. Ditto the G-meter display. It shows lateral acceleration – but it’s not scaled with numbers so you don’t really know how many G’s you’re just pulled.

Another minor thing: The climate control doesn’t allow any inputs for a moment or two when you first start up the car. You can’t immediately turn the fan to high, for instance. You must  wait until the computer boots up. On a hot day, the moment or two this takes can be – is – annoying. Also that it resets itself every time the engine is turned off – so that when you turn it back on, you have to re-enter the temperature you want, fan speed and so on.

If you’re in the market for something that’s got personality, performance – and price – going for it, the Juke’s hard not to like.