Competition is good – but not always necessarily for the seller. 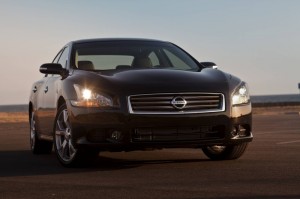 When Nissan introduced the Maxima back in 1981, the idea of a “four door sports car” – as the car would soon be styled in TV and print ads – was a new idea. Or at least, not a common one. The Maxima was a Japanese take on the BMW Concept – only more accessible because more affordable.

By the early ’90s, the Maxima sported the same basic 3.0 liter V-6/5-speed stick drivetrain used in the 30o ZX. It was one of the hottest things with four doors on four wheels around – for the money and otherwise.

So much so that almost all current-era sedans copycat the concept. Floaty boats with pop-off wire wheelcovers and vinyl roofs are long gone. Just about every sedan on the market is now a sport sedan.

Or at least, sporty looking.

Meanwhile, the  Maxima has moved uptown – and is now a luxury-sport sedan as much as it used to be primarily a sport sedan. It no longer offers a manual transmission – but it can be equipped with amenities such as a heated steering wheel, heated and ventilated driver’s seat, high-end leather trim, a two-piece sunroof and a 9.3 gig music storage hard drive and DVD player. 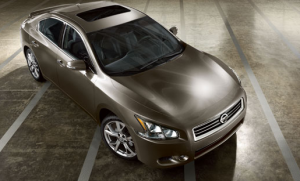 It’s still a very appealing car; the problem for Nissan is the same can be said of a slew of new – and comparably priced – competitors.

The Maxima is a sport-minded, mid-sized luxury sedan without the flashy image of “branded” luxury sedans like the BMW 3 or the Caddy CTS but comparably equipped and similarly enthusiastic as a driver’s car.

The most direct threat to the Maxima is arguably the new Hyundai Genesis – which is priced about the same but one-ups the Maxima in several key areas.

All trims get a slightly revised grille.

Z-car descended 290 hp V-6 is a potent performer; stronger than the base (and even optional) engines in several higher-priced entry-luxury sport sedans – including the 2012 BMW 3 and Caddy CTS. 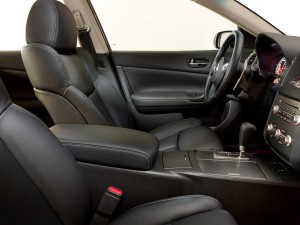 Hyundai Genesis (and Chrysler 300) offer RWD and the same or more power for about the same money – and both can be ordered with V-8 engines.

Too much bleak-looking plastic on the inside for a $30k-something car.

But, there’s the Hyundai Genesis to consider.

There’s also the Chrysler 300 sedan. Though not as athletic overall, it can still hustle – courtesy of its standard 292 hp 3.6 liter V-6, which is teamed up with an eight-speed automatic transmission and has a base price of just $27,470 – undercutting the Maxima by almost $4,600.

The Maxima’s V-6 is teamed up with a Continuously Variable (CVT) automatic; 0-60 takes about 6.2 seconds. This puts it just above mid-pack, acceleration-wise. It is quicker than the Chrysler 300 and Caddy CTS (0-60 in about 7 seconds flat) but not as quick as the BMW 3 (0-60 in about 6 seconds flat). 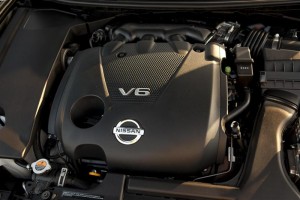 Premium fuel is recommended – but not required.

I miss the manual Maxima but the CVT works brilliantly with the 290 hp V-6. Throttle response is immediate and because there’s no torque converter and no gears to change, what you’ll experience when you put your right foot down is right-now forward thrust in a continuous arc, from idle to redline.

Some CVTs are thrashy – they make a lot of noise but you don’t seem to be getting anywhere fast. Not the case here. Nissan’s CVTs are the best in the business and – key element – instead of a wheezy economy-type engine you’ve got a powerful V-6 feeding it power.

With CVTs, this is critical in terms of a pleasant driving experience. 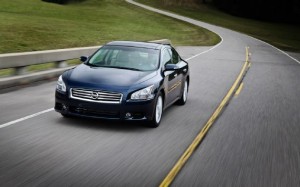 For the most part, CVTs are used in economy-minded applications because they are economy-improving transmissions –  that is, they are more efficient than a conventional (hydraulic) automatic. Nissan is one of the few automakers to pair a high-performance engine with a CVT – and the end result is a car that jumps when you want it to, but the rest of the time is dead calm quiet – and smooth. You can keep an open cup of coffee in your hand without fear of it spilling all over your lap – because there’s no snap at each gear change. Because there are no gears to change (though you can use the paddle shifters to hold the transmission in a lower range, if you wish).

But how does it compare to the others in this price range?

The chief difference between the Maxima and the Genesis (and to a greater extent, the Chrysler 300) is that those cars lean much further to the luxury side of the spectrum rather than the sport side. They’re both big, solid-feeling, hunky cars that are great on the highway and also for just lumbering around. But the Maxima seems to enjoy lateral movement as much as linear movement. It will run with (and even outrun) most of the competition in a straight line – but feels more poised when pointed at apexes. The Genesis is a really nice boat – ditto the 300. But to get sportboat versions of either you’ve got to buy the sport versions of those cars: the 300 C, in the case of the Chrysler and the R Spec, in the case of the Hyundai – both of which cost a great deal more than the Nissan – which gives you boatloads of sport standard.

Though rear-wheel-drive is an advantage, handling-wise – assuming all else is equal – all else is not equal. The FWD Maxima is set up to be a sportier handler than the RWD but softer-tuned Genesis and 300. So it’s still the most driver-minded vehicle of the three – even if it is FWD.

For the maximum Maxima experience, order the optional Sport package and the 19 inch alloys with “summer” high performance tires as well as firmer suspension calibrations. 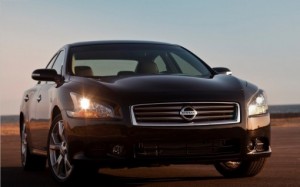 There are some interesting styling details but you have to get behind the wheel to really notice them. From that vantage point, you’ll get the Batmobile Effect of the Maxima’s undulating front fenders and scalloped hood treatment. It’s much more dramatic from behind the wheel than standing outside the car. The whole car is a study in subtle. It doesn’t radiate “I’m fast!” even though it is – and can show its tail lights to several cars that have a “fast” reputation – for example, the Caddy CTS. The Maxima’s the automotive equivalent of concealed carry. You know you’re packing, but everyone around you doesn’t.

That can be its own kind of fun.

On the inside, the Maxima’s got some Stuff, too – including optionally available bucket-style rear seats, a legacy of its days as Nissan’s maximum-effort sport sedan. If you choose these, passenger capacity drops to four from five and instead of being able to fold the rear seats down to maximize cargo-carrying capacity, you get an appx. 8×6 pass-through door to the trunk area. But this opening will still let you carry home six 2×4 studs with the trunk closed – I know, because I did it. 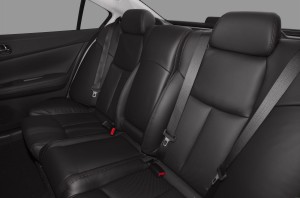 The current Maxima is going on four years old, design-wise. The outside still looks fresh but inside, the passage of a few years shows – relative to newer competitors such as the Hyundai Genesis and also the just-updated Chrysler 300.

The layout itself is attractive and the fitment of the dashboard and trim panels is tight, but the panels themselves are a bit plasticky – for a $32k-something car relative to other cars priced about the same. The good news is you can crutch this very effectively by ordering the available two-tone interior palettes. And even if you don’t do that, the Maxima’s layout is much sportier in ambiance than what you’ll find in the more laid-back Genesis or the more stately Chrysler 300. It still has that edge to it – even if it’s no longer quite as single-minded a sport sedan as it was originally. 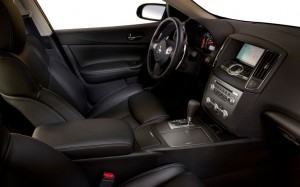 The Maxima’s main weakness is the growing strength – and proliferation – of its rivals. Go back five years and there wasn’t much in the Maxima’s price range that was also in the Maxima’s league. You had to go up in price to get something superior – or even comparable. That’s no longer true. The Hyundai Genesis, in particular, is a strong contender. It may not be quite as crisp as the Maxima, but the rear-drive layout and V-8 option give it all kinds of potential. The Chrysler 300 is also a damn nice car. Not quite as sharp, granted. But $4,600 less to start is hard to overlook. And heck, there’s also in-house competition from Nissan’s very own Altima – which is a lot like the Maxima used to be. You can get the same 3.5 liter V-6 engine – but with a six-speed manual gearbox – in a car that’s about the same size  inside and outside (the Altima actually has more front seat legroom)  for $25,570 instead of $32k.

If I were calling the shots at Nissan, I’d do two things: Figure out a way to get the Maxima’s price back under $30k – which would rebalance things vis-a-vis the Hyundai Genesis. Two, I’d get the current Z-car’s 3.7 liter, 332 hp V-6  into the Maxima for 2013. That would tilt the balance solidly back in the Maxima’s favor – not just relative to the Genesis, but across the board. The Maxima would be the clear number one again.

Not just one among many. 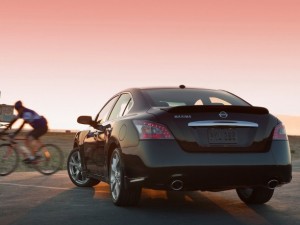 The Maxima’s still one of the best things going in its segment, but it’s not the dominating presence it used to be.