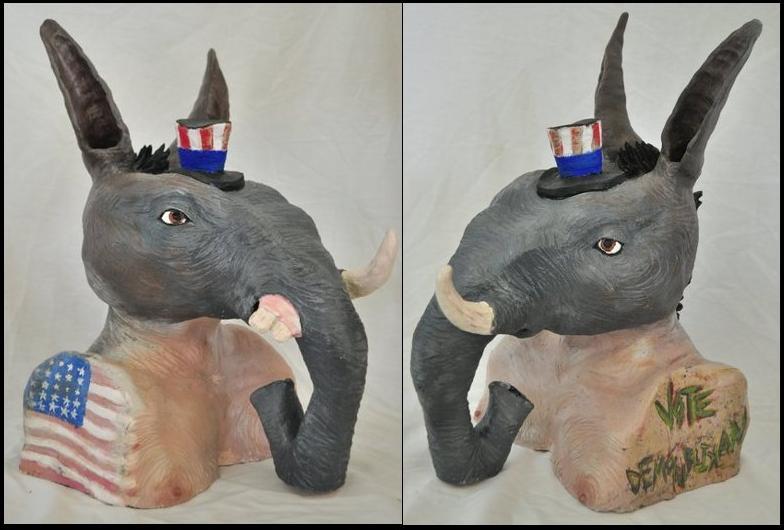 For example, we have the ongoing “debate” (so-called) between Republicans and Democrats, “conservatives” and”liberals.” It is like the “debate” between the National Socialists of long-ago Germany and the communists of Soviet Russia. Fascism, communism – they are both in fundamental agreement, much as they argue (often fiercely) about the particulars. It is the same with our Republicans and Democrats. They do not fundamentally disagree. Both urge that society be organized on an authoritarian collectivist basis – though they each call this by a different name. They disagree merely on the ways in which this force is to be organized – and how it is to be used.

But both meet in the middle.

They agree that rights are really conditional privileges, granted (and limited) by “society.” Neither respects ownership of our persons, let alone our property. Both exert their power over the individual by coercive, collectivist mechanisms which the individual is required to obey in exactly the same way as William Wallace of Braveheart renown was told he had committed treason against “his” king by refusing to Submit and Obey. When Wallace tells his inquisitors that “never in my life did I swear allegiance to him,” the blase reply, “It matters not – he is your king,” is just exactly the same reply any individual American would receive today (by form letter) from, say, the IRS. And it would be affirmed by most Americans, too.

To have a proper conversation in 2012 America, we should begin by dispensing with the intellectually dishonest and  conversationally incoherent terms, Republican and Democrat, liberal and conservative.

There are authoritarians of various inclinations – and people opposed to authoritarianism in all its manifestations.

Let me put it in concrete terms, using an everyday example: property taxes. Both the (so-called) left and right agree on the principle, with their differences coming down to the amount of the tax and how the monies extorted thereby are to be spent. The “Democrat” or “liberal” wants to make sure the local government schools are well-funded. The “conservative” or “Republican” agrees   – he just wants to make sure the money doesn’t go to fund the teaching of evolution or the advocacy of gay marriage. Neither of which ultimately matters, of course, to the former (more precisely, never was)  land or home owner. He pays, regardless. And if he declines to pay, both types of authoritarians – on the “left” and the “right” – will draw their knives and seek his blood. Literally, they will kill him, if it comes to that. If he declines to pay the money they demand – and attempts to defend himself against their demands.

An anti-authoritarian is repelled by the spectacle. Because he rejects, in principle, the shedding of blood to lubricate the machinery of authoritarianism. You are either a free man – the owner of your person and any property you duly pay for, without restriction of condition. Or you are not. Free men are not reduced to “company town” servitude by the making of their “ownership” of property conditional on paying rent to the government each year in perpetuity. You either own your land, your home – or you do not. Similarly, either your physical person is yours – or it is not. “Democrat” “liberals” believe that it is not – that your physical person is merely a constituent cell of the Great Collective. Hence, for example, seatbelt laws. And on the “Republic” and “conservative” side, the war on (some) drugs. Your body is not yours.  The collective claims it first.

Here again, the anti-authoritarian takes a fundamentally different view. He does not point guns at you “for your own good” – or for any other reason, except in self-defense.

It is time to choose sides. You are either an authoritarian of one description or another. Or you are opposed to authoritarianism. There is no middle ground, no having your authoritarianism and your liberty, too. So-called “moderate” authoritarians believe the latter is possible but in fact, it is only a transitory condition. When it comes to human rights, once ground has been given for any reason, you will soon find yourself without any ground at all left to stand upon. It is only question of time before whatever remnant remains of your former rights are are shredded in their entirety. It is like a steer trying to stay on its feet amid a pack of hungry lions, hoping they will only rip off some of his flesh and be satisfied with that.

So, let’s begin with proper definitions – and call things by their right name, openly.

It will be a good start.