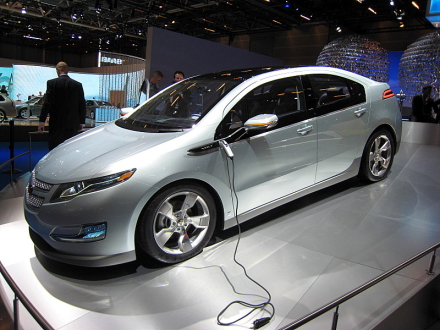 GM has just announced it will be idling the plant (and the 1,300 workers at that plant) where the “game changing” Chevy Volt electric car is – uh, was – built.  GM says it’s only temporary – until they figure out how to “align production with demand.”  It could be a long wait for those workers.

GM projected production of 45,000 Volts this year. That may have been just a little bright-sided. Last year, 7,621 of them found buyers (about 2,400 fewer than the 10,000 GM had hoped for). This past month, just over 1,000 of the $40,000 sort-of electric cars (sort of, because deep inside the thing, there’s a gas engine that serves as a sort of carry-it-with-you “range extender”), which means “production” and “demand” have a ways to go before they are, er, aligned.

One reason why, obviously – though perhaps not to GM – is that the concept itself was misaligned. Electric (and hybrid-electric) cars exist for one reason: To do an end-run around gasoline. The whole point of the exercise, as a practical matter, is to lower the cost of driving by cutting the driver loose from $4 a gallon fuel. But when it takes $40,000 to do that, it becomes pointless as a practical matter. Yes, it’s a clever bit of engineering. I know. I’ve driven the Volt. Remarkable. It can operate at  steady 60 MPH for several miles (rather than coast for a few seconds, like most hybrids) purely on the strength of its electric motor and batteries. Very cool. But also very expensive – and that’s the point that matters.

The Volt’s sticker price is in BMW 3 Series/Lexus GS land. Do people who purchase $40k cars have to worry much about $4 gas? Apparently this thought did not occur to the people at GM responsible for the Volt. Even with a $7k direct federal subsidy to each buyer (more on the indirect subsidies below)  a new Volt still costs what we call in the car business “entry luxury” money. Easily two (even three) times the amount that would buy you any one of several very appealing compact sedans, several of which get 40 MPG on the highway.

So, drum roll, people looking for something economical did not look at the Volt. Who did? CEO Dan Akerson conceded that the average income of a Volt buyer is $170,000 annually  – not exactly hard times.

GM figured (so it said) the Volt could be sold to the less flush on the basis of its down-the-road economies. But those are theoretical and ill-defined (including, for instance, such as variables as winter driving; how will extreme cold weather affect the electric drivetrain? Etc.). But the up-front costs are very real – and forbidding. People facing lean times are not lining up to finance a $40k purchase, even with a$7k carrot dangled in front of them. And the potential buyer pool of 170k’ers per year is just about dried up.

Is GM unaware? I doubt it, because all kidding aside, GM is anything but stupid. That is, the people running it can do math. They also understand marketing – and politics. And that’s where the troof comes out about the Volt and why it ever saw the light of day.

GM, like every car company, has embraced the politics of green because it leads to taxpayer-financed green. Think Solyndra was a boondoggle? The Mackinac Center for Public Policy estimates that the actual cost-per-car of each Volt, once all the federal subsidies are factored in, comes to $250,000 or $3 billion, total.  (Lookee here for more.)

Guess who paid for that?

It wasn’t GM’s money. It was your money. And mine. And the money taken from millions of other taxpayers, all poured into the coffers of GM to further the advancement of otherwise economically untenable projects that would never have see the light of day except for the fact that we have a system of crony capitalism that distorts the free market like a funhouse mirror.

The Mackinac study’s author, James Hohman, tartly described the Volt as “the most government-supported car since the Trabant” – a reference to the infamous two-stroke, plastic-bodied POS manufactured in the old DDR – that’s East Germany, for the edification of younger readers.

And that’s what rubs. If you or I decided to build a Homer Mobile (remember?) in our garage, it’d be up to us to finance the thing and if we went next door to our neighbor’s place and flashed a gun demanding money or else to “help” we’d be shot by the neighbor or tossed in jail. But that’s because we are not Too Big To Fail. GM, of course, is. And has many big friends in Washington, too. So it can indulge in the building of electric Homer Mobiles and send the tab to us – and pocket the proceeds.

Because keep in mind that GM is not losing money on the Volt. We are.