Subaru is serious about fixing the main problem with Subarus – they’re gas pigs. 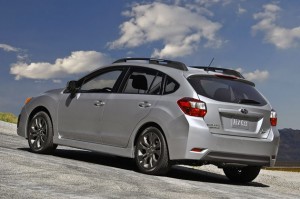 The 2012 Impreza – with a new engine (smaller) and a new transmission (CVT) isn’t. And we’re not talking about a Mickey Mouse 2-3 MPG difference here, either. Last year’s Impreza – equipped with its standard 2.5 liter engine and ’80s-era technology four-speed automatic – was rated by the EPA at 20 city, 27 highway. For a compact four-cylinder hatchback, that is – was – execrably consumptive. It surely turned off buyers who would otherwise be very much Subaru-inclined. Me included. I have always like Subarus. They are sturdy, handle poor roads (and poor weather) better than almost anything that’s not a big truck with real truck 4WD. And they seem to last a really long time. Out here in rural SW Virginia, I still routinely see Brats from the Reagan Years running around.

But, they eat gas almost as heartily as my old muscle car – which has a 7.5 liter V-8 and which I can’t afford to drive every day or even every week. Same issue with the Soobie. The old ones, anyhow.

With the new (2.0 liter) engine and CVT transmission, 36 highway is possible. A massive (almost 10 MPG) improvement. In the city, mileage is almost as spectacularly improved: 27 MPG, or as good as the 2011 Impreza delivered on the highway.

So, what’s the catch? 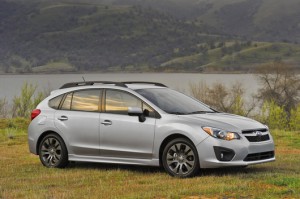 The Impreza is Subaru’s entry-level sedan/hatchback sedan, available in a wide range of trims, all the way from the base model 2.0i sedan at $17,495 to the high-performance, turbocharged WRX at $36,095. (The WRX is really a separate model in its own right and so will be reviewed separately.)

The Impreza sedan/hatchback sedan are completely new for 2012 – including a new drivetrain lineup designed to deliver more acceptable fuel efficiency than the previous Impreza delivered.

From worst in class to almost best-in-class gas mileage – even with AWD.

Among the most affordable AWD-equipped cars on the market.

The penalty for increased MPGs is reduced HP. 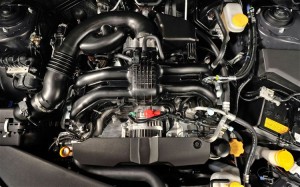 Subaru has said sayonara to the Impreza’s previous 2.5 liter (and 170 hp) four – a good engine but also a hungry engine. Replacing it is a smaller, less rapacious 2.0 liter four (same horizontally opposed “boxer” layout) that makes 148 hp. It can be teamed with either a five-speed manual or – for the first time in the Impreza – a continuously variably (CVT) automatic, which like the smaller engine is intended to maximize efficiency rather than performance.

The result is either good – or not-so-good – depending on what you’re looking for.

The good: Vastly better fuel economy. The ’12 Impreza delivers almost 10 MPG more than the ’11 on the highway – and is more fuel-efficient in city-type driving than the ’11 was on the highway. During the week I had the Impreza, my average mileage never dipped below 30. That is quite something – especially when you remember that the Impreza – every Impreza – is also AWD.

The front-wheel-drive-only Hyundai Sonata rates 24 city, 35 highway. The FWD Mazda 3 sedan comes in below that at 25 city, 33 highway. The SkyActive version of the Mazda3 – which costs about $2k more than the Subaru – manages to just barely beat the Impreza, with a 28 city, 38 highway posting.

The also front-wheel-drive Ford Focus sedan delivers the same 28 city, 38 highway – 40 on the highway with the extra-cost Super Fuel Economy Package. This is “best in class” – but again, it’s only slightly better than the Subaru. Which, let’s not forget, is all-wheel-drive vs. the FWD Ford. 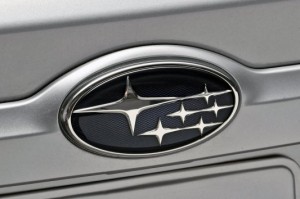 Oops. There’s only one size and price-comparable AWD-equipped competitor: The Suzuki Kizashi. It’s a very nice car, but another hungry mutha: 22 city and 29 on the highway. It’s also hard to find. Suzuki is a small operation (cars, not bikes) and depending on where you live, there might not be a Suzuki store within reasonable driving distance.

Other than the Kizashi, there just aren’t many – if any – AWD-equipped cars in the Impreza’s class. You either have to go larger – or more expensive – or both. An AWD-equipped Ford Fusion, for example, starts at $25,425 – about $7k more than the AWD Impreza’s base price. And the AWD Fusion’s gas mileage is considerably less than the Subaru’s –  just 23 city, 33 highway.

Well, ok – but what are the downsides?

But, all this needs to be put into context.

Yes, the ’12 Impreza is a bit slower than the other cars in its class. However, none of the cars in this class are slow – really slow – in the way that slow cars used to be slow. By which I mean, so slow they struggled to keep up with traffic or merge with traffic, which made driving them uncomfortable. The Impreza is not like that. No new car is like that. They are all adequately powerful/quick enough for normal A to B driving duty. Any new car can reach – and hold – 90 MPH (and then some) with deceptive ease.

Is that fast enough?

An old Beetle or Chevette needed about 15-20 seconds to get to 60. That was slow. In comparison, a car like the Impreza is a hot rod.

In a flat-out drag race, 0-60, the Impreza would end up about 1 car length behind a competitor like the Sonata or Mazda3. That’s what a  second or so’s difference in 0-60 times works out to in real life. Is it a BFD? You tell me: How often do you plan to drag race? How much does it matter to you to make it to 60 MPH one car length ahead of (or behind) the guy next to at the light? 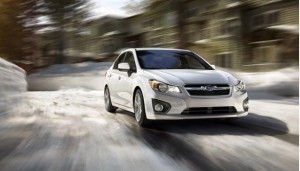 And which cost you less than $20k?

Take your pick: Conventional sedan or hatchback sedan – as before. The hatch is the roomier of the two, cargo-wise, with 22.5 cubic feet of real estate behind the second row and 52.4 with the second row folded flat. The sedan has 12 cubic feet – which is still pretty decent for a compact.

The back seats have enough legroom to accommodate large adults (I’m 6ft. 3 and my legs did not brush up against the front seats) however, because the roof curves down slightly toward the doors, taller occupants (like me) may find the left side of their head brushing up against the headliner.

The overall look/layout is conservative. Functional, but nothing that really stands out and tugs at your heart.Of course, that’s not what the Impreza is about. It is intended to tug at your head – your brain. It’s a solid, sensible car. We could use more like it.

One thing Subaru coulda-shoulda done was make the fixed front quarter “vent” windows actually vent – by making them not-fixed. Vent windows (formerly common but now almost unheard of in new cars) make it possible to keep a car tolerably cool inside without resorting to the AC. That could also save fuel, as well as wear and tear on the AC. Vent windows need to make a comeback – and Subaru could start the trend. The glass is there already. Just put a hinge on it. 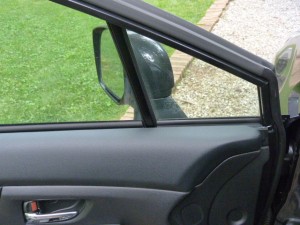 I like the simple controls for major functions such as rotary-select knobs for airflow, fan speed and temperature. This approach is not “new and improved” – thank the motor gods.

Ditto the Impreza’s manual pull-up emergency brake, which could actually be used in an emergency – unlike the electric on/off parking brakes that are becoming popular gadgets in other cars.

The seat heaters are so-so. I’ve noticed this in several other ’12s I’ve tested lately – not just Subarus, either. The Volvo C30 I had a week back was also gifted with mediocre bun warmers. I’m not sure why this is.

I just wish it weren’t.

One other small gripe: The weight sensors for the air bags built into the seats are incredibly sensitive. I was out running around and stopped for a sandwich at the deli. Said sandwich was big – but I didn’t think it’d be big enough to trip the sensor in the passenger seat. It was – and it did – causing the annoying “buckle up for safety” buzzer to erupt in a  frantic blitz of annoying noise   – even though there was nothing riding shotgun but a “mile high” turkey breast on a Kaiser roll. For real. These buzzers need to go away – or at least, we need to be given an off switch. 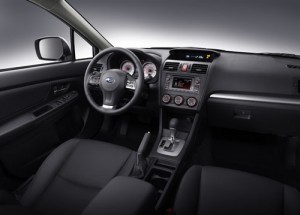 I like that Subaru has chosen the more traditional – and simpler – route to improved fuel efficiency. Several other automakers (most notably, Ford and GM) have chosen to add turbos – sometimes, multiple turbos – to deliver on-demand power and acceptable fuel economy. And this is fine, I suppose – so long as the car is still under warranty. But what happens when it is eight or ten years old and no longer under warranty? Turbos get very hot – and eventually, they croak out. And replacing a turbo can easily cost $3,000. That’s for the one. Imagine having two. Plus the intercoolers and other peripherals that are part of the turbo package.

Maybe it makes sense in a high-performance car like the WRX. But does it make sense in a $17k-ish family transpo unit? Not in my book. I would never buy a turbocharged car for A to B driving, out of dread for the the down-the-road expenses – which also include higher-than-normal routine maintenance expenses.

So, good on you, Subaru.

The new Impreza may not be a hot rod, but that’s not what it’s for.