It’s easier to shop minivans now than it was just a few years ago – because there are fewer minivans on the market. GM and Ford no longer sell them at all. And if you want a higher-end van, you’ve only got three models to dissect and compare: The Honda Odyssey, Toyota Sienna – and the Chrysler Town & Country, subject of this review. 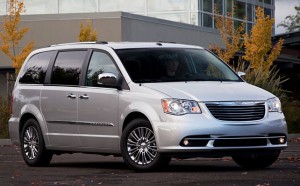 The Honda Odyssey Touring Elite, for example, is nearly $44k vs. just a little over $39k for a top-of-the-line T&C Limited. Chrysler also gives you a standard 283 hp V-6 vs. a standard 250 hp V-6 in the Honda – and a less-than-200 hp standard four in the base model Toyota Sienna.

On the other hand, the T&C is no longer offered with AWD. The Toyota Sienna is –  and the T&C’s base price of almost $30k is a lot higher than the base price of a Sienna, which starts just over $25k.

So there are distinct pros – and cons.

Let’s take a longer look at both. 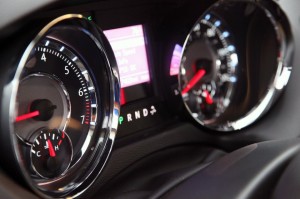 The T&C is Chrysler’s premium minivan, related to the Dodge Carvan but unlike its mass-market sister, the T&C comes decked to the nines with standard luxury features such as leather seats, music storage hard drive and rear seat entertainment system. That’s the base Touring model, which starts at $29,995. Go all the way to the Limited and your T&C will come with the entire kitchen, not just the sink: multi-screen rear seat entertainment system, heated first and second row seats, heated steering wheel, xenon HID headlights, an even better stereo and, if you want ’em, power folding/stowing third row seats. (The second row seats can be folded, too.)

Of the other lux vans out there, only Honda’s Odyssey (base price $28,375; $43,825 at the top) comes comparably equipped – and comparably priced. There’s also the Toyota Sienna – though it spans a wider range, with the base $25,060 version of that van being closer to the Dodge Caravan than the T&C. Base model Siennas are also equipped with a four-cylinder engine while the T&C (and Sienna) both come standard with pretty powerful V-6 engines.

Higher-trimmed versions of the Toyota are comparable on features – and price – but still lack the more upscale brand image that Chrysler has in its corner. 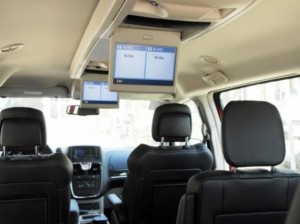 It’s already got everything. Plus more, if you want it.

Standard 283 hp V-6 is about 20-35 hp stronger than the standard (and optional) engines in Odyssey and Sienna.

Standard six-speed transmission (vs. five speed in the Odyssey).

Brilliant (and hugely useful) folding/stowing second and third-row seats. No need to remove anything to get a flat, load-ready cargo floor.

Despite its hp advantage, the T&C is a bit less quick than the V-6 Odyssey and Sienna.

“Safety” aids such as park sensors err on the overcautious – and can be intrusive. 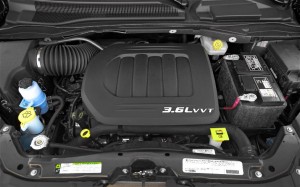 But then, hp isn’t everything.

Despite its on-paper power advantage, the T&C is the least quick of these three minivans. It takes about 8.3-8.4 seconds to get to 60, which isn’t slow but is about half a second slower than the V-6 Odyssey and Sienna.

Reason? The T&C weighs 4,652 lbs. vs. 4,337 for the Odyssey and a comparatively featherweight 4,275 lbs. for the Sienna – a difference of several hundred pounds.

Reason? “Mini” vans aren’t. Current models are large, heavy vehicles – in contrast to the originals, like the first Dodge Caravan, which actually were mini vans. A 1985 Dodge Caravan, for example, weighed about 1,000 lbs. less than the current T&C – and was about a third smaller overall. 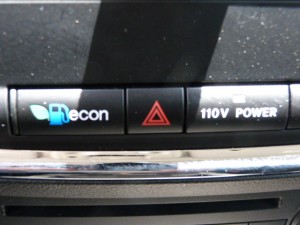 Chrysler does provide an ECO mode to crutch things a little. Push the button – it’s on the center stack, below the AC controls – and the transmission will shift into the next gear sooner (and downshift later) and the torque converter clutch will engage sooner – and stay engaged longer. Engine idle speed will also be reduced slightly.

All together, it’s worth a couple of MPGs – if you drive as conservatively as possible.

One other thing to mention, powertrain-wise: Chrysler does not offer the T&C with AWD. The Honda Odyssey is also FWD-only. In fact, the only AWD-available traditional minivan you can still buy is the Toyota Sienna.

There’s a price for everything! 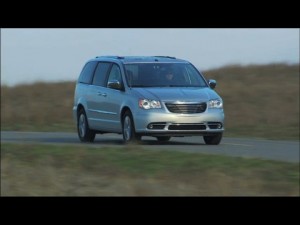 Having driven all three of the big-lux vans (the T&C, the Sienna and the Odyssey) I can relate to you the following:

The Odyssey is the most athletic – if you can say that about a not-so-mini van. The steering is slop-free, the ride is pretty firm and there’s very little body lean, for a minivan. The engine may not have quite as much power that the T&C’s V-6 does, but it sounds sweeter when revving higher – and because it’s not having to schlepp so much weight around, it feels lustier.

So, the Honda’s the track star of the bunch.

The Sienna, on the other hand, is the Queen Mary of the bunch. Serene and stately. Once the screws are turning and you’re out to “sea” – out on the highway – it is comfortable, quiet and smooth. But in the curves, its very soft suspension tuning gives it a wallowing, swaying sensation that’ll have your passengers reaching for the barf bags – unless you drive at, well, minivan speeds.

This is the van of choice for those not in a hurry.

It is somewhere in between. Not quite as precise-feeling, on-center and true-tracking as the Odyssey, but more poised in the corners than the Sienna. In my opinion, the T&C is about “just right” – for a minivan. It’s got a nice mix of the Sienna’s ultra-plush ride and the not-too-mushy suspension/steering feel of the Odyssey. It’s great on the highway – and not too wallowy on curvy roads. You can drive it at a good clip without torturing your passengers. They will probably not even notice you’re driving a bit faster than the posted speed limit.

On acceleration: Despite being a step behind the Odyssey and Sienna in an all-out, pedal-to-the-floor drag race, the T&C moves out quite snappily. In fact, all three of these vans are only about a second less quick than cars that are considered quick – like, for instance, the Mazda Miata (about 7 seconds to 60). And thanks to long-legged overdrive gearing, these lunking, far-from-aerodynamic “mini” vans can trundle along for hours at 80 or more without any signs of straining.

First, all these vans are entirely too fuel-thirsty. I averaged around 20 MPG during the week I had the T&C. Dismal. My 4WD truck does slightly better than that. The T&C is far too heavy – and so needs more engine than it ought to – and so burns more gas than it should. Ditto all the others – including the four-cylinder version of the Sienna, which does no better than the V-6 version of the Sienna.

One of the attractions of minivans used to be that they gave you the real-world versatility of an SUV, but without the obnoxious appetite of the typical big V-6/V-8 powered SUV. They still give you the versatility, but because they’ve gotten so heavy, their fuel usage is only slightly better than what you’d get in a current big V-6 or V-8 SUV.

The T&C looks the part of a premium van – all trims. The chrome, the leather – all the power stuff.

The Odyssey looks expensive, too. But the base model Sienna just looks like a van.

Score one for Chrysler.

You also have to give it to Chrysler in what is perhaps the single most relevant minivan criteria: interior configurability and ease of use. The now-famous Stow n’ Go system lets you drop and fold the second and third row of seats, creating a flat cargo floor and almost 144 cubic feet of cargo room. My loaded T&C Limited had full power assist for the third row on top of that – but the point is you do not have to physically remove the seats to get the flat floor – as you do in competitor models. That is a job – even for a strong man. And once you’ve got the seats out. what do you do with them? Now they’re taking up space in your garage.

Chrysler’s system is magnificently clever – and brilliantly functional. Even if the rest of the van was mediocre, it would be a compelling selling point. 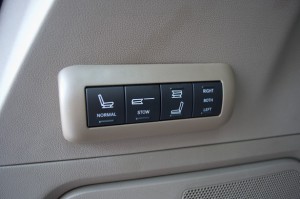 And the rest of the van is not mediocre.

As I already mentioned, the T&C starts out as a “dresser” – even the base Touring model is loaded with amenities (including leather and dual power sliding doors, power tailgate, power-adjustable pedals and rear seat DVD entertainment system). The base Sienna, on the other hand, starts out without many of these features and so looks – and is – a bit more spartan until you move up the food chain to the price/features-comparable version. But even then, it’s still a Toyota – which like Chevrolet is a bread-and-butter brand, not a higher-end brand. No offense to Toyota meant. The Chrysler’s just a little nicer, is all.

The Honda comes off as similarly smartset – and offers even more available “stuff” – such as a chilled beverage container, adaptive cruise control and a “multiview” perimeter-style camera system. But even though it has a bit more total theoretical cargo room (148.5 cubic feet) than the T&C, it’s more challenging to actually make use of it than it is in the Chrysler van. Same story with the Sienna – which has the most cargo capacity of the three at 150 cubic feet (and also the option of eight-passenger seating) but like the Honda, the Toyota lacks the T&C’s folding and stowing seats.

The Sienna does offer AWD, of course – which Chrysler used to but decided to drop. Probably because AWD would have pushed the T&C’s already-too-heavy curb weight even closer to 5,000 lbs. – and its EPA numbers even closer to V-8 SUV  numbers. 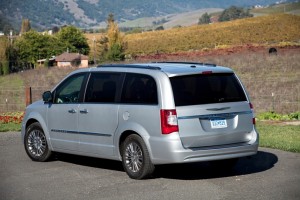 Why hasn’t it occurred to anyone at the OEMs to make a diesel-powered minivan? A diesel engine would be the ideal powerplant for a minivan. They produce lots of low-end torque, just what a heavy (and not driven especially fast) minivan requires. High RPM hp is a wasted effort in a minivan. Imagine instead of 283 hp at 6,400 RPM – and a puny 260 ft.-lbs. of torque at 4,400 RPM – the T&C instead had 350-plus ft.-lbs of torque at a much more usable 1,500 RPM. This would give the van better off-the-line oomph than the thirsty gas engine – and probably 10 MPG better average fuel consumption, too. Just an idea… .

That aside, just a few additional points to make:

The T&C’s park sensors are hyper, hyper-conservative. Get within two feet of another car as you are trying to parallel park or back into a space and the (overly premature) warning dings commence. This is both distracting and annoying. If you’re a good driver, able to judge distances competently, this system will likely bug you, too. Worse, I was unable to locate an “off” switch … and nothing in the manual described any process for turning off the chimes and buzzers.

Second item: The shifter for the six-speed automatic is located, toggle-style, on the dashboard, to the right of the steering wheel. This is a solid idea. It saves space on the floor console and it’s more ergonomic – except for one thing. To work the transmission’s manual gear-change function, you have to drive one-handed. A paddle-shift arrangement on the steering wheel someplace would be better. 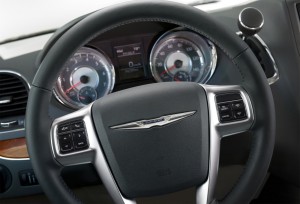 Unless you need AWD – or eight-passenger seating – the T&C will impress you with its mix of the practical and the luxurious.