If  “speeding” – defined as driving faster than the legally posted maximum velocity – is necessarily “unsafe,” why do cops do so routinely?

The answer, of course, is: Because they can.

More precisely, they can do so with impunity. Who watches the watchmen, after all?

Here is a recent – and particularly egregious – example:

Denver cop Derrick Saunders was caught doing 143 MPH in a 55 – while legally drunk (.089 BAC). The repercussions? A 42 day suspension. At first, he was at least fired. But Saunders, who like a lot of cops apparently does not believe that “speed kills” when he is the one speeding –  appealed his firing. And the police union backed him up. To repeat: a drunk cop doing 143 MPH in a 55 is demanding his job back. And the police union is helping him get his job back. The full story is here.

Meanwhile, let’s consider what would have happened to a non-anointed Mere Ordinary in my own state of Virginia:

Va. defines “reckless driving” as exceeding the posted maximum speed by more than 20 MPH – or any speed over 80 MPH, anywhere. Note carefully that one’s driving is considered legally reckless merely as a function of speed. It is not a viable legal defense to argue that you were sober – and in full control of your car and posed no danger to anyone. Merely to be caught driving 80 MPH of faster ( that’s all of 10 MPH over the highway limit of 70 MPH) or faster than 20 MPH over any posted limit (so, for instance, 56 MPH in a posted 35 zone) constitutes “reckless” driving – ipso facto – which in Va. is a Class 1 misdemeanor criminal offense, not merely an infraction – like a standard speeding ticket.  If convicted, you will have a permanent criminal record that will be indexed in the NCIC database (where murderers, rapists and others are cataloged), spend up to a year in jail, pay a $2,500 fine, and face the strong likelihood that your driving privileges will be suspended for six months – and the absolute certainty that you will pay extortionate insurance premiums for at least the next five years. 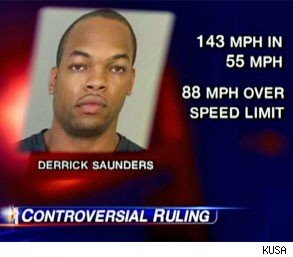 Mind: This is for doing 80 MPH on a highway posted 70 – or 56 in a 35 – situations where (as we all know) the average speed of traffic is typically  already close to 80 (in the first case) and not far below 56 in the second. it is all-too-easy to get slammed with a “reckless driving” cite.

But can you imagine the rain of shit that would descend upon a non-annointed caught doing 88 MPH over the limit? While drunk?  Well, I can – because a local kid on a motorcycle was caught doing pretty much the same thing as Officer Saunders – at least, speed-wise. The kid was caught doing a mere 126 MPH. He was not drunk. But he wasn’t anointed. The court (in Botetourt County) sentenced this kid to six months in the Graybar Hotel. If he’d been even slightly drunk, a 3-5 year prison sentence would not be out of the question.

They have a similar statute (CRS 42-4-1401) and similarly severe consequences in Colorado – home state of Officer Saunders. Just not for Officer Sanders:

“A person who drives a motor vehicle, bicycle or electrical assisted bicycle, or low-power scooter in such a manner as to indicate either a wanton or a willful disregard for the disregard for the safety of persons or property is guilty of reckless driving.” The punishment is up to 90 days in jail, a $300 fine and “additional costs and surcharges.”

Add drunk driving to this and – per Colorado law – it’s up to a year in jail, up to $1,000 in fines, 48-96 hours of community service and “alcohol education” for three to nine months.

If, that is, you’re not a member of Team Blue.

If you are – like Officer Saunders -a different set of rules applies. You only get  “suspended”  for a month or so. Then you get to be a cop again. And get to give tickets to Mere Mundanes again.

And the Officer Saunders Incident is not an isolated aberration. In Florida, recently, the Sun Sentinel newspaper exposed the fact of “oral reprimands” given to 31 state troopers for driving at “excessive speeds.” How excessive? In excess of 90 MPH. There were 5,100 incidents of excessive speed documented by the paper, including at least one incident involving speeds over 130 MPH. Mind, these were not “emergency calls.”

In addition to being “orally reprimanded,” the offending officers also sometimes lost the privilege of their take-home squad cars.  None lost their jobs – much less their driving “privileges.” Not a ticket was issued. Not a single “point” assigned.  No insurance consequences. In fact, no real consequences at all.

But of course, we all know the story. Is there anyone out there who hasn’t witnessed police “speeding”? Who has not personally seen a cop do – with impunity – that which he’d ticket you or me for doing? Followed up with a lecture about the “dangers” of so doing?

It does not require further elaboration. The double standard is jarringly obvious. Cops are allowed to get away with speeding – and not “buckling up for safety”and carrying their guns wherever, whenever. Because they are cops. Our modern-era praetorians.

Just don’t dare give them the appropriate Roman salute – or you’ll find yourself even farther over on the wrong side of that double standard.