The only way to shatter the illusion of consent – the keystone of majority-rule “democratic” tyranny – is by making it obvious to nearly everyone that the Fuhrer (oops, “president”) has been selected by, at most, a minority of the voting population. That in addition to being a cretinous philosophy as such (i.e., mob rule)  “democracy” is also a lie at its most basic level.

Because the majority doesn’t rule. 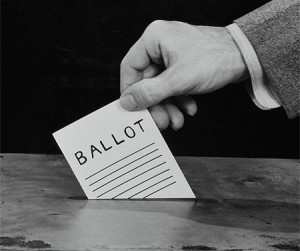 Consider: In a modern presidential selection, only about 50-something percent of the people eligible to vote actually do vote – thus, the “winner” is the one who gets appx. 26 percent or so of the 50 percent. In other words, a quarter of the voters determine who is selected Duce (excuse me, “president”).

For example, in the 2000 presidential selection, The Chimp received 50,456,002 votes. His WWF-style opponent, Captain Planet, received 50,999,897 (see here for more). Even though Captain Planet received 48.4 percent of the so-called “popular vote,” he lost the selection to The Chimp – who received 47.9 percent. But the key thing is that neither won anything close to a majority of the votes of the eligible voters.

In the 2000 race, the voting age population was 205,815,000. Go back a sentence or two and re-read the actual turnout numbers. Combine The Chimp and Captain Planet’s tallies. You get 101,455,899 . There is some dispute about the “fine print”  – for example, The American Presidency Project claims 105,586,274 cast ballots in the 2000 presidential selection (see here). But the essential point remains: The American Caudillo (oh, yes, excuse me … the “president”)  was selected by about 50 million Americans – about a quarter of the eligible pool of voters.

So much for mob/majority rule.

We in fact have minority rule in this “democracy.” Have had it, for decades.

Many people are unaware of this fact – which is carefully camouflaged by the MSM. Because the MSM – and the PTB behind the MSM – know very well that their gooses will be thoroughly cooked if the scam ever becomes common knowledge. Even the dullest of Clovers still buys into the “majority rule” essence of democracy. He feels he is “represented” – and that the government operates with the “consent of the governed.” This confers legitimacy on the government in the Clover mind.

Once you peel away the curtain of consent, it’s over.

But it won’t be over so long as enough people continue to play along.

Imagine if enough people did not play along.

If enough people simply stopped being useful idiots. If the number of people voting dropped below 40 percent – or  even less. The  “winner” thus  selected by 15-20 percent of the country would be as obviously illegitimate as the “winner” of a selection in Uganda. It would be damn hard to maintain the illusion of “consent of the governed” – the shaky foundation upon which rests the entire rickety, corrupt and despicable edifice “democracy.” 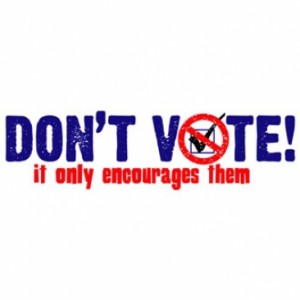 Mob rule as a political ideal is vile – but it has traction in the minds of careless thinkers because of the seemingly egalitarian premise that underwrites it.

But what if the majority – the mob – doesn’t rule? What if the average American has about as much say over what is done to him – in his name – or in the name of a majority of his fellow Americans – as a Kazhak prole had over the doings of the Politburo in Soviet Russia? Don’t forget – they had regular selections in the old Soviet Union, too.

Of course, democracy is more cunning. Instead of a single leader representing a single party, democracies have plural leaders representing the same party – the party of government. You get to choose between them. Like choosing high fructose Coke vs. high fructose Pepsi.

Real soda – with sugar – is not on the table.

It’s a brilliant con – perhaps the most effective form of totalitarianism ever conceived. Because it keeps the masses quiescent. Because they believe they have a choice – and because the majority has ruled. It is time to disabuse them of this fantasy.

One way to really drive the point home would be to hold a nationwide “sit in” – or rather, stay home on Selection Day. Instead of long lines at the polls – the boilerplate story the MSM runs every year with depressing predictability  – imagine if the MSM were compelled to report that most polling stations were as vacant as the “ideas” of Mitt Romney and Barry Sotero? That the next Jefe (pardon me, “president”)  was in fact selected by a small minority of the voting public – a minority comprised overwhelmingly of tax leeches and assorted parasites casting ballots in what the magnificent H.L. Mencken searingly – because accurately – described as a “sort of advance auction of stolen goods”?

Ah yes! What then? Indeed!

The whole rotten thing would come tumbling down. People – enough of them, at any rate – would be disabused of the filthy lie that they are “represented.” It would be clear as the Berghoff’s famous plate glass window that what America has – and has had, for generations – is a kind of elected king. A king selected by a minority of the population – who confer upon him effectively unlimited authority to act in the name of a majority that never had a say in the matter.

I’ve suggested in previous columns that progress can be made in small steps – as evidenced by the successful efforts to roll back “gun control” laws (see here for my column about that). But imagine a more frontal assault. A direct – but peaceful – jab in the eye of “democracy” and “majority rule.” Now that might get something going. And we’d better start doing something soon. Peacefully or otherwise, change is coming. 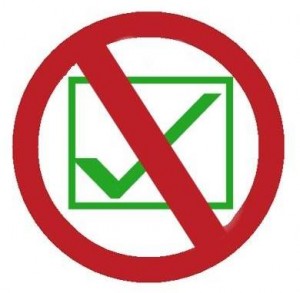 Whether we can believe in it remains to be seen.