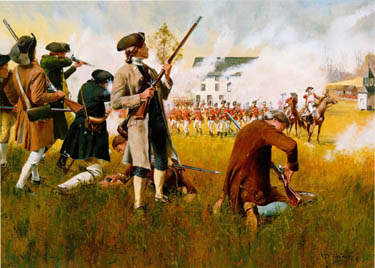 Are we there yet?

No, but we are getting very close.

We are now at the point, I suspect, that our colonial ancestors were in the early 1770s. They were still British subjects, but had begun to question the relationship – the supposed right of the British sovereign to rule them. Within a very short time, they would reject the relationship in toto – on principle – and would become Americans.

I believe we are in roughly the same spot as those soon-to-be-Americans of the early 1770s.

An awakening is taking place. Millions of people are wising up to the fraud that is contained in the sentence, “consent of the governed.” Are learning to reflexively cringe for their soon-to-shorn freedoms whenever a politician utters the word.  Have come to understand that the sprawling beast in Washington no more represents them – let alone has the slightest interest in protecting them (let alone respecting their rights) than the ossified oligarchs of parliament represented the colonists or had any interest in protecting anything other than their power and the sacks of loot that always accompany its exercise.

We – millions of Americans – now understand the nature of the relationship: Master – and slave. That due process itself has been taken away from us. That we are now to be denied even the elemental decency of being informed of the charges against us before we are taken away into the night, to be “indefinitely detained,” on the mere say-so of men with guns and badges. That when we are “asked” to “contribute” it means guns will be shoved under our chins. That we no longer have a single right that’s not conditional at best – if not entirely defunct.

We have become aware that almost no aspect of our lives is left unmolested. We cannot eat, work or even sleep in our own beds without government supervision – and that very soon, even our recreations and private habits will likely fall under the “commerce clause” since these may be said to affect “health care” and thus, are of “interest” to the government.

We – that is, almost half the population – also knows the futility of voting.

Tweedledee replaces Tweedledum – and the machine rolls on.

We see, in the immortal language of Thomas Jefferson, “… a long train of abuses and usurpations, pursuing invariably the same Object.” One that “… evinces a design to reduce them under absolute Despotism.” The parallels are clear – and ominous.

It begs the question: What shall we do?

Some advocate violent resistance – and that day may yet come. It is as natural – and as right – to fight back against an evil government as it is to fight back against evil individuals. But it is the response of last resort, when every other effort at a peaceful resolution has failed – and when the only alternative is abject submission and the formal acceptance of the master-slave relationship.

We are not there yet.

We may still speak, and write – and within certain bounds, are still free to act. In particular, we are free to not act.

We can decline to participate in (and thereby, help to legitimize) things we know in our hearts – and minds – to be dangerous and wrong.

We can decline to vote, if voting means voting for “the lesser of two evils.” Rather than sanction evil, we can withhold our consent and force evil to operate without it. Consider what the result would be if, next year, we are presented with the false choice of Obama or Gingrich (or Romney) and, rather than hold our noses and vote for one or the other in the desperate hope that it makes a difference, millions upon millions of us just stayed home instead. Enough of us such that the “winner” could claim no mandate – no consent of the governed.  He would be forced to be what the current Dear Leader is – but openly.  No more gauzy talk of “democracy.”

It could not go on for long.  Open tyranny never does. But give the masses the illusion of consent; let them believe they have “democracy” – and tyranny can be open-ended. Endless.

It is within our power to end this sham. If only we will refuse to act, when acting amounts to endorsing the sham.

If Ron Paul is not on the ticket, stay home. Withhold your consent. Force the system to bare its fangs and reveal itself for what is.

Or rather, decline to submit to outrageous violations of your dignity as a human being, to loathsome assaults on your rights as a human being. For the moment – perhaps a brief one – we have the opportunity to stop Gate Rape and much worse to come besides. If only a few million of us simply announced that we will not enter an airport terminal (or attend a sports event) until we can do so without being subjected to warrantless, probable cause-free searches, it is a sure bet that warrantless, probable cause-free searches would end. The TSA does not care about your rights but the airlines most emphatically care about your money. If even 20 percent of current flyers openly declared that they will not fly again until the TSA is abolished – or at least, that only individuals who have given some specific cause for suspicion be subjected to searches – then group gropes of children, women, the elderly – and most important of all, the innocent traveler – would end.

The system depends on your voluntary cooperation. Withhold it now, while you still can.

Force authoritarian thugs to state openly what they advocate – what they are – by calling them on their euphemisms. Ask your local board of supervisors official precisely what he means when he “asks” that county residents “contribute” for the betterment of the local school system – or some such. Ask him how he feels about sending men with guns to the homes of peaceable people who might say “no, thank you” and decline to “contribute.” Make him – make them – say it:

We are going to force you to hand over money by threatening you with violence. If you resist in any way, we will do you violence.

Maybe opt-out of government mandates that have made new cars absurdly complicated and expensive – by buying (or keeping) an older car.  And tell the automakers why you’re boycotting their current products.

If stopped at a “checkpoint” by a cop, ask him – politely – how he feels about subjecting his fellow citizens to random, probable cause-free searches.

Let’s get it all out in the open.

Perhaps enough people will recoil from the edge of the abyss before it is too late to step back from it. Reason and appeals to the human conscience are always preferable to the alternative.