Trigger-happy, over-aggressive cops are – unfortunately – a reality. Which is why it’s probably a good idea to get your concealed handgun permit (CHP) if you carry a gun with you in a car. 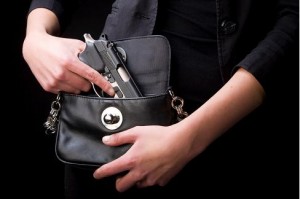 Even in – especially in – states where open carry is legal.

In my own state of Virginia, for example, it is perfectly legal to have a gun lying openly on the seat beside you – even if you don’t have a permit. It is also a perfectly good way to end up getting shot – the cop who shoots you uttering the magic words – officer safety – to justify his actions.

Bear in mind the fact that a cop’s testimony is almost always taken as presumptively truthful while the testimony of a non-cop is considered presumptively untruthful. Or not considered at all. You – assuming you are still alive – will have to support your testimony for it to be given any weight in court. Let alone equal weight.

Absent video or audio corroboration, in court, the cop’s word wins over yours every time. He says, ” I saw a gun” – and it’s all over before you can get in a word edgewise.

But let’s rewind a little bit and consider a traffic stop scenario:

You are stopped by police for some reason (or no reason at all, if it’s one of those egregious Fourth Amendment-free zones they call “safety” checkpoints). You have your handgun with you in the car. The law says this is legal, provided the weapon is in plain sight – and not “concealed,” for which you’d need a permit. Remember: If you don’t have a CHP – and the gun is not plainly visible – you are setting yourself up for a felony bust. Since you don’t want that, you put the gun on the seat beside you, all nice and legal –  and wait for Officer Unfriendly to approach.

Technically, this is what you are supposed to do – according to the law. But you probably know what will happen – or what’s likely to happen – when the cop walks up to your vehicle and spots a gun in plain view. 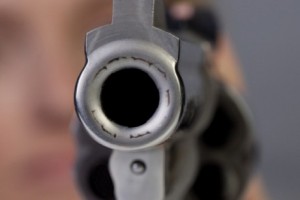 Legal open carry or not, the situation is going to get tense – real quick. Cops have been given a thorough course in Authoritarian Over-Reaction 101. Some are just looking for a reason to release their Inner Chimp. If you have bad luck and have to deal with such a cop, the mere sight of your gun may set him off – and before you have a chance to say anything, it’s very possible you’ll be staring down the barrel of his gun.

And that – being able to say something before he sees something – is the key thing here.

If you have a CHP, you have the opportunity to say something – specifically, that you are a CHP holder – before the cop sees your gun.

It could very well save your life.

Because the first thing the cop sees will not be a handgun. Because as a CHP permit holder, your handgun is legally concealed – in your waistband, on your hip, in the glovebox – wherever. The point is – it’s out of plain sight.

And more to the point, legally out of plain sight.

This will give you that possibly precious moment or three to advise the cop that you are a CHP holder. He’ll know about the permit before he knows you have a gun.

And the fact that you are a CHP holder may defuse the tension all by itself – even though you may have a loaded gun on you. Why? Because the fact that you are a permit holder tells the cop right away that you’ve got no felony convictions in your background. Ergo, you are probably not a threat to “officer safety.” At least, it will be harder for him to so claim, in the event of an unjustified escalation. 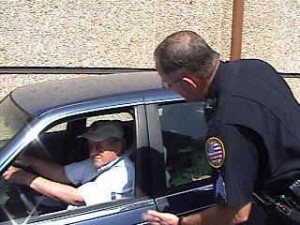 Most cops, in my experience, will settle down once you’ve told them you are a CHP holder. You should tell them immediately, in a calm voice – the very first words out of your mouth: “Officer, here’s my driver’s license and CHP.” I keep both together in a small fold-out carrying case so that I don’t have to root around for either – and can present both at the same time.

Then I tell the cop I have (or don’t have) a gun on me. And ask how he’d like to proceed. All the while keeping both my hands on the steering wheel – and in plain sight. The cop will probably want to know where the gun is – and may demand its surrender for the duration of the stop. Let the cop take the lead. If wants to see the gun, tell him where the gun is. If he wants to hold the gun, let him get it.  Don’t reach for the glovebox – or your waistband. Make no move that could be construed as “threatening officer safety.”

Legally, you may or may not be required to inform the cop you are a CHP holder (state laws vary, be sure to check yours) but it is smart to do so because it will probably de-escalate the situation. Most especially if you are carrying a gun.

In this scenario, it is less likely the cop will go Rambo on you – and he’ll have a much harder time, later on, citing “officer safety” in the event that he does go Rambo on you.

Never forget that the law is one thing – the reality out on the streets something else. Legally, you may have every right to open carry – and have that gun sitting beside you on the seat in your car. But accept that if you’re forced to deal with a cop – a cop who has already targeted you for some “violation” – and the first thing he sees is your gun, escalation is likely. You do not want escalation at this weird and dangerous time in America’s history – when the deck is so disproportionately stacked against us Mundanes. The more you can do to de-escalate the situation, the better it will likely be for you.

Once, while riding one of my motorcycles at a speed somewhat higher than legal, I passed a state cop going the other way. He lit ’em up, turned around and came after me. I had already pulled off to the side of the road and was waiting for him when he pulled up – which may also have helped my case, I concede. I took off my helmet, handed him my little folder that holds my DL and CHP. His demeanor relaxed noticeably. I told him I was not armed. (My .45 doesn’t fit well when I’m wearing leathers!) We ended up talking guns for a few minutes. He let me go without issuing a piece of payin’ paper. Something like this happened another time, too.

Bottom line: Having that CHP isn’t a guarantee you won’t get a ticket, but it may significantly improve your odds of not ending up another casualty of “officer safety.”

Reader Question: Why no Wagons?