It’s interesting to note that while all-wheel-drive is spreading to virtually every type of car on the road, it’s becoming a rarity among minivans. 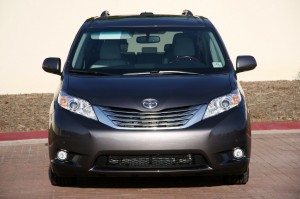 In fact, the only traditional minivan that even offers AWD is the 2012 Toyota Sienna.

And there’s something else, too.

You can buy a four-cylinder Sienna – a potentially more economical powerplant than the big V-6s that come standard in the Toyota’s main rivals, including the Honda Odyssey and the Chrysler Town & Country.

It may not end up saving you all that much gas – because the four’s mileage (19 city/24 highway)  isn’t all that much better than what the V-6 gives you (17 city, 23 highway). But there’s no question it can save you  a pile of money up front.

Only Kia’s Sedona starts out lower at $24,900 – and the physically smaller Kia doesn’t offer AWD at any price.

Or eight-passenger seating, either.

So, has the Sienna got any flaws worth mentioning? Let’s take a look and see. 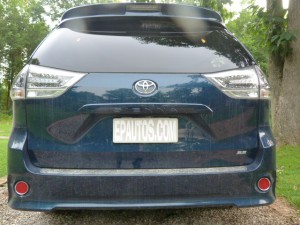 The Sienna is a full-size traditional minivan available with either a four or six-cylinder engine and with – or without – AWD. It is also one of the few vans left on the market that offers eight passenger seating – as well as a factory-fitted “mobility” version designed to accommodate the handicapped.

Base price for the seven passenger, front-drive model with 2.7 liter four cylinder engine is $25,060. The eight-passenger LE version of the Sienna starts at $26,145.

The Sienna was heavily updated last year (2011) so changes for this year are limited to trim changes, such as a new passenger-side power seat and automatic headlights being included with the XLE package.

Undercuts both Odyssey and T&C on price. 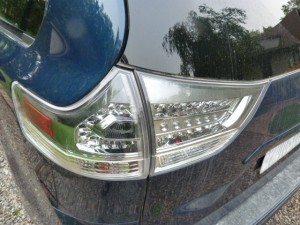 Four cylinder’s rated (and real -world) mileage not much better than optional V-6’s.

May be more van than you need.

The Sienna offers two engines – something most other vans don’t.

You can get an economy-minded 2.7 liter four-cylinder – or choose the more powerful 3.5 liter V-6.

The 187 hp four-cylinder is the standard engine in the base (seven passenger) FWD Sienna. It’s paired with a six-speed automatic and is rated 19 city/24 highway by the EPA.

Neither the T&C nor the Odyssey are available with four-cylinder engines. 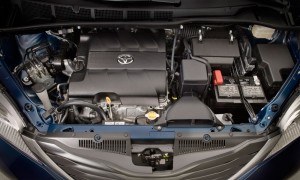 The Sienna’s V-6 also comes with a six-speed automatic but you can choose either FWD or (optionally) go with a full-time AWD system – a feature not offered in any other minivan currently on the market.

EPA mileage stats for the V-6 equipped Sienna with FWD are 18 city, 25 highway and 17 city, 23 highway with the optional AWD system.

Expect a 0-60 time of about 9 seconds with the 2.7 liter engine; the V-6 version is considerably swifter, capable of getting there in about 7.8 seconds.

Time gives perspective – and appreciation – for the engineering Great Leaps Forward made over the past 25 years. The first-generation minivans of the early-mid 1980s were basically compact-sized economy cars with a box bolted on top of them. They felt cheap, they looked cheap – and they drove cheap. There was nothing to like about them except their cheapness – and their practicality as family-mobiles.

A modern minivan like the Sienna is a completely different animal. It is huge – and ingot-solid. Powerful, quiet and luxurious. 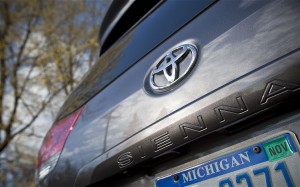 The Sienna’s new four-cylinder engine isn’t a Saturn V rocket, but 187 hp from a four cylinder engine is about 87 hp more than the four cylinders of the early-mid ’80s were making – and certainly enough to get the van from “a” to “b” competently – though it’s easy to see why Toyota doesn’t offer AWD  with this engine (although you can upgrade to eight-passenger seating). The extra weight/inertia of AWD would likely push the 0-60 time into Prius Territory (or worse) while also killing the four’s fuel economy potential. Which, by the way, isn’t much – just 1-2 MPGs better than the V-6 overall. But you do save about $1,200 bucks up front by not buying the V-6 and that’s equivalent to about six months’ worth of free gas at current prices all by itself. You’ll also be about $3-$4k ahead of the game relative to what you’d spend on a base model Honda Odyssey or Chrysler T&C.

Equipped with the optional the V-6, meanwhile,the Sienna is capable of outrunning – or at least, keeping pace with – a Miata or Z4 BMW in a straight line, stoplight-to-stoplight drag race. It’s a great way for the Family Guy to have his revenge. Truth be told, the V-6 is probably more powerful than many (probably most) drivers of minivans will probably ever need. 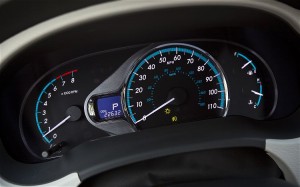 And check this out: Even the base four-cylinder/FWD Sienna comes standard with 17 inch alloy wheels and if you want, you can order a Sport package (on V-6 versions) that ups the rolling stock to 19 inches. This minivan offers a more aggressive wheel-tire package than a mid-’80s Corvette!

Another thing to mention: The Sienna is big. 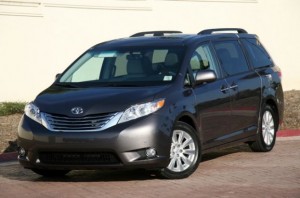 Despite its size, the new Sienna is very manageable to drive and doesn’t feel as big as it really is – probably because most of the length is behind you. There’s only about three feet of Sienna from the windshield forward. The front end is very stubby – and that makes it easy to judge how much room you’ve got available during parking maneuvers – while the light, electric-assisted power steering (and remote-view back-up camera) makes it easy to execute such maneuvers.

Overall, I found it much tighter feeling than the previous generation Sienna, which was noticeably easier to unsettle than the Honda Odyssey. Barf bags for the back seat riders are no longer needed.

The Sienna’s Large Marge proportions only become hard not to notice when you slide it into your garage.

Even though several major car companies – Ford and GM – have entirely dropped traditional minivans from their product portfolios, they weren’t dropped because the concept is unsound. The GM and Ford vans were just crappy vans. The Sienna isn’t (neither is the Odyssey – or the new Chrysler T&C ). Sure, it’s basically a family bus. But it can also be a luxury bus, if you move up the trim line. 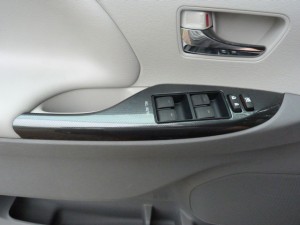 The standard Sienna is family-ready as it sits: Dual sliding doors, three-zone AC/heat, power windows, locks, cruise control and a better-than-decent AM/FM stereo with CD player and MP3 hook-up. At about $25k, sticker, this version of the Sienna is extremely affordable compared with the Odyssey, Chrysler T&C and even the much-touted value leader in this segment, the Kia Sedona – which is priced about the same but which is also an older design that looks – and feels – more Blue Light Special than the upmarket, uptown Sienna.

Don’t automatically rule out the four cylinder engine, either. Drive one first. You may find it to be sufficient – and could save yourself a tidy sum as a bonus.

But what makes the new Sienna really shine is that you can upgrade to the V-6 and eight-passenger seating, order AWD – and toss in some very nice luxury/convenience features on top of that – and still come in well below the pushing $40k (and over $40k) price of a higher-trim but still FWD-only Odyssey or T&C.

There are some other things to note about the Sienna, too.

One is the available SE Sport package – which in addition to huge 19 inch wheels also includes a snarkier-looking front clip with fog lights, clear plastic tail-lights, carbon fiber trim pieces and mesh grille inserts. The package gives buyers who may have been attracted to the sportier-looking but smaller Nissan Quest a good reason to shop Toyota instead. And it gives would-be Odyssey and T&C buyers another Sienna “plus” they can’t find in the Honda and Chrysler vans. 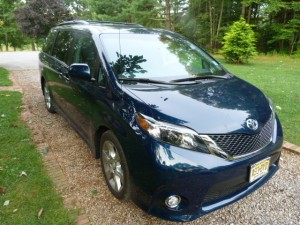 You can also get a pair of super-nice second row captain’s chairs in the Sienna that have their own fold-out footrests – just like your favorite TV-watching chair at home. These ride in long-travel tracks that allow the chairs to be pushed back so far that you can’t touch the backs of the front seats with your feets.

On Limited trims, the third row seats power fold themselves into the floor at the touch of a button.

And there’s that factory Mobility/Access package which preps the Sienna to handle a wheelchair or scooter.

The optional rear-seat DVD system has an unusual (maybe unique) and definitely useful split screen display monitor that lets users watch two different things at the same time. You can even order Lexus-like technology such as rain-sensing wipers and Adaptive Cruise Control that automatically adjust the Sienna’s following speed in relation to the ebb and flow of traffic, keeps it from going faster than your dialed-in speed when going down a steep grade – and so on. 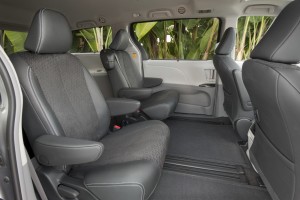 The Chrysler T&C and Odyssey also offer similar high-end luxury amenities, but generally, they cost more when comparably equipped – and remember: AWD isn’t available in those two at any price.

Sienna wins on cargo space, too: 150 cubic feet (with the second row seats out and the third row folded) vs. 148.5 in the Honda and – surprisingly – 143.8 in the T&C. That’s surprising, because the T&C is physically a little bigger than both the Sienna and the Odyssey.

So, it appears that Sienna’s pretty much got all the bases covered: Practicality, performance and price, too. 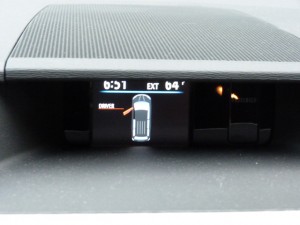 Is there a downside? If you’re in the market for an eight-passenger, AWD-equipped (or four-cylinder powered) traditional minivan, not that I can see.

Well, there is one thing. The little monitor built into the upper dash for the back-up camera is iPod sized. It should be at least twice its current size.

Toyota is still peddling a pretty skimpy three year/36,000 mile comprehensive on this unit (five years/60,000 miles on the powertrain) vs. the industry-best five year, 60,000 mile comprehensive and ten year/100,000 mile powertrain coverage Kia gives you. But the counter argument there is the Sienna’s a much nicer van – better finished, quieter, more luxurious, etc. – than the Sedona and if history is any guide, it will probably hold onto its value longer.

Honda’s coverage is the same as Toyota’s. So’s Chrysler’s.

But Toyota has that established track record for generally high quality – so the warranty issue’s more a psychological (or marketing) issue, as I see it. 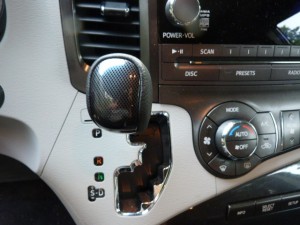 Whatever your needs – and budget – there’s probably a Sienna that meets them.