“When they come for my gun, they will have to pry it out of my cold, dead hands,” is a common refrain I often hear from the Neo-Cons when there is a threat, credible or otherwise, that the US government is going to take their firearms.

And, when I hear this crazy talk, I agree with them openly.  “You are right.  They will pry your gun from your cold dead hands,” which I often follow with the question, “And where will that leave you except face down in a pool of your own blood the middle of the street, just another dead fool resisting the State?”

This is not a question they are comfortable with, if only because the intent of their saber-rattling was to imply they would fight to keep their weapons, and win.

If the federal government decides to disarm the public, and one of these (see photo below) rolls down your street after a not-so-subtle request that you kindly turn over your firearms and ammunition “for the common good,” it will be nothing less than suicide by cop to do anything other than what you are told. 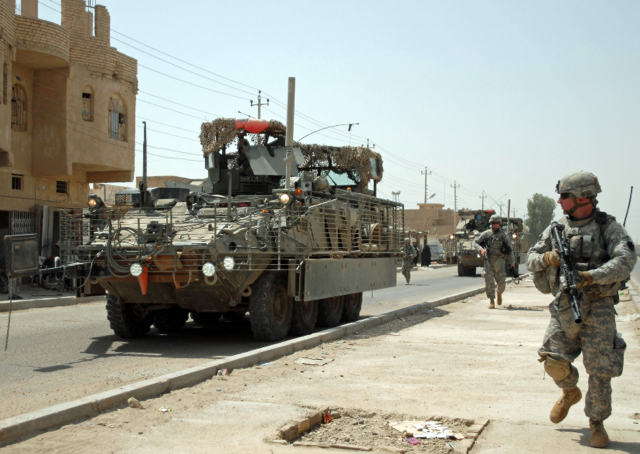 The militarization of US police forces is ongoing and escalating.  Many cities and towns now own tanks, armed personnel carriers, even attack helicopters, and almost all are outfitted with military weapons not available to the general public. 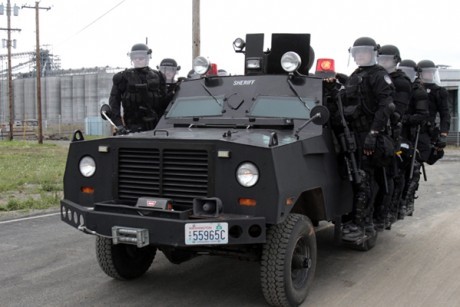 And, it is not just your hometown cops who are getting new boy-toys.  The military itself is buying up weaponry not just for use in the current or next scheduled war, but to deal with the likes of you, citizens who don’t seem to understand that the Bill of Rights has been overruled, and that specifically includes, but is not limited to, the right to protest and engage in civil disobedience. 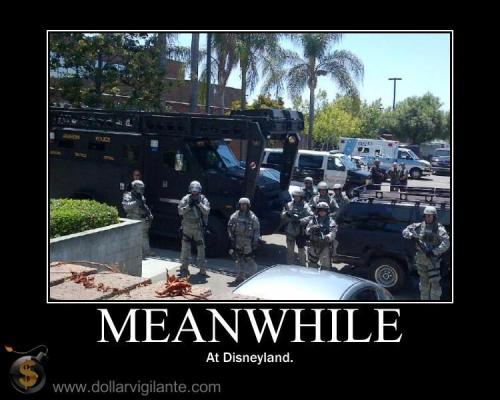 Also ignored (as if it didn’t even exist) is the Posse Comitatus Act of 1878 which generally bars the military from law enforcement activities within the United States.

According to Public Intelligence:

And, they are not just arming cops and weekend warriors for domestic purposes.  Active duty Marines are now being trained for law enforcement operations all over the world (of which the US remains a part) specifically to deal with civil uprisings, and the US government knows that civil uprisings are coming to a town near you just as soon as the fantasy of a healing economy is shattered, the US dollar fails, and unemployment goes to 30%+ in real numbers.

And, to you tough-talking Neo-Cons with your AR-15 rifles and a few thousand rounds of ammo, here is reality:  they will take your guns, and no, all your Second Amendment bluster aside, you are not going to do anything about it.  You are not going to take on a platoon of Marines with state of the art automatic weapons and the best body armor you cannot buy protected by armed personnel carriers and attack helicopters unless you choose to die that day — for nothing.

You will either be in the country or out, and if you are in, you will stay in and you will comply.

Jim Karger is a lawyer, and frequent contributor to The Dollar Vigilante, who has represented American businesses against incursions by government and labor unions for 30 years. In 2001, he left Dallas and moved to San Miguel de Allende in the high desert of central Mexico where he sought and found a freer and simpler life for he and his wife, Kelly, and their 10 dogs. Karger’s website is www.crediblyconnect.com.

We really believe those are your choices.  Stay, and submit… or die.  Or go now.  Your ancestors all fled their own oppressive police states in Europe, Asia or Africa and now it is your turn to get out before they shut the door.  There are plenty of much freer places to run to, mostly in Latin America and Asia.  TDV regularly outlines how, where and why to go (subscribe today) and even offers services to help get you second passports/citizenships in as little time as 6 weeks (contact TDV Passports for more).  For those that choose to stay we wish you luck and will try to support you the best we can… this includes things like Dear Slavey which offers actionable advice on how to live inside the beast as freely as possible.  Dear Slavey is right here on the TDV Blog every Tuesday.