The car of the future – or the future of the car – is here a few years ahead of schedule. 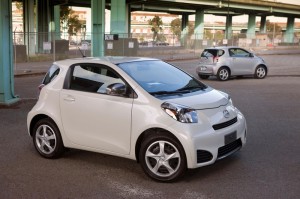 It’s just 10 feet long (for some sense of scale, a Toyota Camry sedan is almost six feet longer, end to end) and seats two realistically – four contortedly. But, it averages better than 35 MPG – almost exactly what the federal government has decreed all cars shall average (35.5 MPG) by model year 2016, just three short years from now.

There are almost no new cars that can do that.

Soon, they’ll have to.

The iQ’s showing them how.

In fact, there’s only one new car that’s smaller – the (not so) Smart car, and that just barely. But the Smart is out of its depth as other than a close-quarters city car; it’s basically an enclosed motorcycle, only less useful – and much uglier. The iQ, meanwhile, is a real car. Or at least, a real-word usable car. It can venture on the highway – something the Smart has trouble with. And it has more-than-you’d-expect room for cargo as well as an at-least-theoretrical (vs. nonexistent in the Smart car) back-seat. 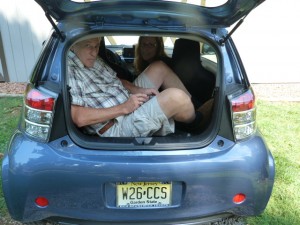 The only other size-similar and price-equivalent competition is the $15,500 (to start) Fiat 500 coupe. The Mini Cooper coupe is another possibility, size-wise – but its base price of $19,500 is considerably higher than all these models.

The iQ itself is not new – Toyota has been selling this model in Europe for a couple of years. (A dressed-up version sells as the Aston Martin Cygnet – believe it or not.)

But as the US comes to resemble Europe more and more – from crippling gas prices to crippling gas guzzler regulations – it seems the time is ripe for a Euro-style, American market micro car. 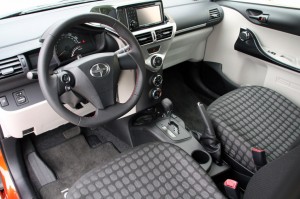 Comes standard with all the necessaries – including AC – and then some (including Bluetooth and leather trim).

A little iffy on the highway.

Lift the envelope-sized hood and you’ll discover one of the smallest four cylinder engines that’s not also a motorcycle engine. But though the iQ’s 1.3 liter engine is tiny, it’s not a weakling – for its size. It manages 94 hp – enough to get the iQ to 60 in about 11.5 seconds. This is easily 2-3 seconds quicker than the (not so) Smart car, which requires well over 14 seconds to get to 60.

It’s also slightly quicker than the standard-issue Fiat 500, which gets there in about 12.5 seconds. 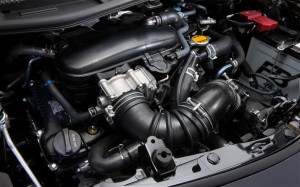 The iQ’s performance would probably be much better – and the iQ a lot more enjoyable to drive – if Scion let you have this engine with a manual transmission. Unfortunately, the standard – and only – transmission is a continuously variable (CVT) automatic.

Gas mileage, though, is where the iQ really performs. This car registers 36 MPG in city driving – better than almost every new car’s highway mileage.

It also delivers 37 MPG on the highway – and so averages better than 35 MPG in combined driving. This is exceptional economy. Only a hybrid can beat it – and the least expensive hybrid – the Toyota Prius C – starts out about $5k more.

And of course, the Prius C won’t fit in your pocket.

The (not so) Smart car is a miser, too. With an EPA-rated 34 city, 38 highway, it also makes the 2016 CAFE cut. However, the (not so) Smart is not really highway-usable, except for brief hops (more on this below). And of course, it’s only a two-seater – so far less practical than the iQ, which at least has rear seats. Those seats may not be people-usable, but that’s another story. 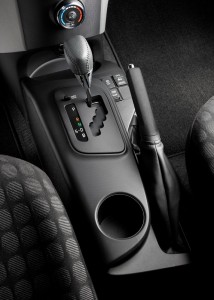 The Fiat’s a stronger challenger. Its 30 MPG city is significantly lower than the iQ’s 36, but its highway rating of 38 MPG is slightly better than the iQ’s. Plus, of the three cars, it’s the one that’s more viable for people who need a car that’s more than just a city car.

More on this below, too.

The iQ is not underpowered.

Even 75-80 MPH is no problem – in terms of the engine’s ability to get you there – and hold it there. The top speed is around 100 MPH – so it’s certainly got guts enough for most purposes.

It also – literally – turns on a dime. And is incredibly easy to maneuver into – and out of – tight spaces. It makes the Mini seem oafish in this respect.

But, there are a few caveats.

First, there’s a fairly high level of drivetrain noise – not so much from the engine, but from the continuously variable (CVT) automatic. As you accelerate, it revs the little engine to the upper reaches of its powerband around 4,000-5,000 RPM – and holds it there – until you back off the gas pedal. This is the nature of CVTs, but when combined with probably not much insulation (adds weight and so was likely kept minimal) and a hardworking little engine/transaxle that’s just inches away from your lap, it does make for a pretty rackety ride.

Once you’ve reached steady-state cruise speed and back off the throttle, the racket does die down. But the iQ is definitely more noisy than the typical car.

A manual transmission would help here – and also make the car more fun to drive.

The second issue is a function of the iQ’s extremely short wheelbase (just 78.7 inches) relatively low curb weight (2,127 lbs.) and fairly tall/box profile. These lead to Interesting Times at speeds much above 70 in a straight line – and on anything less than a perfectly smooth, flat and very straight road.

It gets darty – shifting to the left and right – when driven at higher speeds. Wind buffeting can push the car around suddenly. A dip in the road, or swerving to avoid something – like the body of a dead deer in the road – can easily unsettle the car.

Driving the iQ on the highway requires full time and attention – and both hands firmly on the wheel. 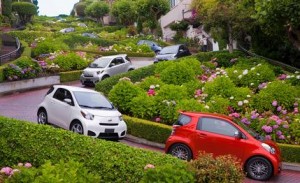 In the (not so) Smart car, it’s not. With even less engine (1.0 liters, 70 hp) and even less wheelbase (73.5 inches) and an even taller profile, it’s really not suitable for use on US highways for more than very short hops.  It can be done, of course, but the car struggles to maintain 70 – because its top speed, all out, is only about 90. And with five inches less wheelbase, it is a job just to keep the thing in a straight line at 60 – much less today’s routine highway speeds of 70-plus. Uneven roads and the slipstream of passing cars (let alone big rigs) easily destabilize the not-so-Smart car.

The Fiat 500 is superior to both the iQ and the Smart when it comes to highway driving. Though still a micro-car, its 90.6 inches of wheelbase seems limo-like compared with either the iQ or the Smart – and imparts highway/high speed stability those cars can’t match.

But the Fiat can’t match the Scion’s superb fuel efficiency, especially its 36 MPG city rating. This is 6 MPG better than the 500’s 30 MPG rating.

The 34 MPG city Smart can – well, almost. And it does beat the iQ (but not the 500) on the highway, with a solid 38 MPG posting. But again, it’s not really drivable on the highway – so the number’s largely irrelevant.

This is a really, really small car. 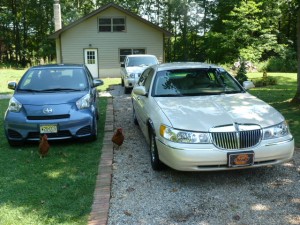 Not quite 10 feet (120.1 inches) bumper to bumper. To give you a sense of scale, a typical compact-sized sedan like the Toyota Corolla is 180 inches – or 15 feet long. Park the micro-Scion next to something like my father-in-law’s Lincoln Town Car and the iQ’s front bumper barely makes it to the Town Car’s B pillar, by the leading edge of the front door.

Ditto the Fiat 500 – which at 139.6 inches overall is more than a foot-and-half longer, end to end, than the pocket-sized iQ.

The only thing smaller – that’s still on four wheels – is the Smart car. At 106.1 inches overall, it is just under nine feet long.

But, there’s a surprise waiting inside. The iQ has as much – or more – front seat room than a number of mid-sized cars. Check these specs: 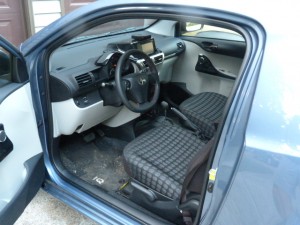 The iQ also has 37.7 inches of headroom, which leaves ample clearance for even very tall drivers. It’s an amazing feat of space-usage. Once you’re inside, you feel as though you’re in a much larger car.

To be fair, the same’s true of competitors like the Fiat 500 and Smart car, though – which have 40.7 and 41.6 inches (respectively) of front seat legroom. The Mini Cooper’s nice up front, too – with 41.4 inches of legroom.

Of course, the back seats are passenger-useless in all these cars – those that even have them, that is. However, if they do have back seats, as the iQ does, these can be folded down to expand the available real estate for cargo. So configured, the iQ has 16.7 cubic feet of space – damn good for a mini-me car. The mid-sized Toyota Camry’s only got a 15.7 cubic foot trunk, for some perspective on this.

And the Smart car – which has no back seats – has just 7.8 cubes of cargo space. So, it can’t carry much in the way of passengers – or cargo. The iQ can at least carry some stuff – even if it’s not set up to realistically carry more than two people. 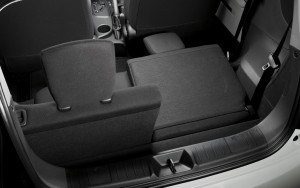 Of course, size isn’t everything.

The Fiat and the Mini are almost universally acclaimed as cute little things. And the iQ? It kind of grows on you, too – but for a different reason. Its unpretentiousness – its dedication to function over form – has an appeal that you appreciate more the more time you spend with it. For instance, the proportionately enormous doors – which are as big (or bigger) than the doors typically found on much larger cars. These add to the feeling of spaciousness – and also make excellent use of the available space.

Other sensible shoes touches include the three large rotary knobs on the center stack that control the AC, fan speed and outlet selection and the large, legible – and easy to use LCD touchsceen interface that sits on top.

Finish is also superior. For instance, the underside of the hood, rear liftgate and door jambs are clear-coated and shiny, not dull and ugly. (The $70,000 Jaguar XF I had last week did was not clear-coated in these areas; the finish under the hood and trunk lid was therefore dull – and cheap looking.)

The tall profile also means tall glass – and excellent all-around visibility. Note the wrap-around rear quarter glass that expands your field of vision when backing up or looking to either side. 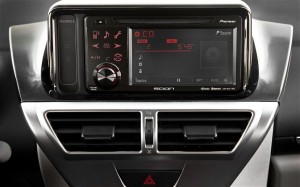 Scion is not marketing this car as a cheapie – even though it is very affordably priced. There’s just one trim – and no factory options. The as-it-sits iQ comes standard with AC, power windows and locks, a very nice stereo (with Bluetooth), even a leather-wrapped sporty steering wheel. Such features – some of them, at least – are extra-cost in competitor models like the Smart, which doesn’t come standard with AC.

There are also many dealer-available add-ons, including performance suspension parts (stiffer springs and swaybars) as well as body/trim pieces to customize the car’s appearance.

To deal with safety concerns – legitimate buyer concerns about being accordionized by a Tahoe – the iQ comes with no less than 11 air bags, including front seat cushion air bags and an air bag around the rear seat headrests. Still, to quote Ivan Drago from Rocky IV, in a match-up between an iQ and a 6,000 lb. SUV… you will lose. 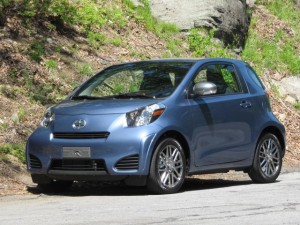 It’s more viable as a car than the (not so) Smart car – and more fuel-efficient (and better equipped for less money) than the price-comparable version of the Fiat 500.

It’s also a kind of car we’re going to be seeing a lot more of as 2016 – and the government’s 35.5 MPG fuel economy mandate – loom ever larger in the rearview.

So, get ready. The future car’s here.