The TSA’s security policies are getting more and more bizarre, from testing people’s drinks for explosives to ordering all travelers to freeze on command, but could a frightening policy that was seriously explored by the DHS be resurrected – forcing people to wear taser bracelets that would deliver an electric shock if they got out of line?

The story sounds like it belongs in a South Park episode or on an urban myths website – but it was actually true.

In 2008, the Washington Times reported on how DHS official Paul S. Ruwaldt of the Science and Technology Directorate, office of Research and Development, wrote to Lamperd Less Lethal, Inc. indicating that the Department of Homeland Security was ready to purchase devices from the company that would be used to deliver incapacitating shocks to airline passengers, all of whom would be mandated to wear the taser bracelet once they checked in for their flight.

The so-called “safety bracelet,” also known as the Electronic ID Bracelet, was designed to replace a boarding pass and be capable of tracking the passenger through the airport by means of GPS technology. The device would also contain details about the passenger and their flight plans. 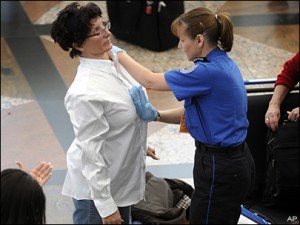 The primary function of the device was to allow airport officials and flight crews to deliver an incapacitating electric shock to travelers by means of Electro-Muscular Disruption (EMD), completely immobilizing the individual for minutes. The bracelet would be worn by all travelers until they disembarked at their location. The patent for the device admits that all passengers could be incapacitated if the devices are activated.

“Upon activation of the electric shock device, through receipt of an activating signal from the selectively operable remote control means, the passenger wearing that particular bracelet receives the disabling electrical shock from the electric shock device. Accordingly, the passenger becomes incapacitated for a few seconds or perhaps a few minutes, during which time the passenger can be fully subdued and handcuffed, if necessary. Depending on the type of transmission medium used to send the activating signal, other passengers may also become temporarily incapacitated, which is undesirable and unfortunate, but may be unavoidable,” reads the patent for the device.

In his letter to Lamperd Less Lethal, Inc., DHS official Ruwaldt also noted how the bracelet could be used as a “method of interrogation,” in other words a torture device. He also raised the prospect of using the device against protesters to allow the temporary “restraint of large numbers of individuals in open area environments by a small number of agents or Law Enforcement Officers.”

The letter stated that the DHS was “interested in…. the immobilizing security bracelet” and that it was “conceivable to envision a use to improve air security, on passenger planes.” Other letters made it clear that the DOD, the CDC, Department of Interior, Department of Agriculture Forestry service, as well as unnamed law enforcement agencies were also keen on acquiring the device.

Following a wave of negative publicity, the DHS pulled the plug on its interest in the torture bracelet, and Lamperd Less Lethal, Inc. set about removing the letters from Ruwaldt it had previously proudly displayed on its website.

However, given that the TSA is already doling out punishments for people who do not display the proper level of obedience, by either preventing them from flying, stealing their cash, or simply punching them in the balls, how far away are we from the hideous idea of the taser bracelet being resurrected? Especially given the heights of absurdity the TSA has already scaled by introducing its ludicrous “all stop” policy and its testing of drinks purchased inside the secure area of the airport?

The fact that the torture bracelet was ever seriously considered at all should send chills down the spine of every American who values their dignity, especially given the endless train of TSA abuse stories that pour in on a weekly basis.

Imagine a TSA goon not only having the power to squeeze your junk if you so much as look at them the wrong way, but also having the capability to deliver an electric shock to anyone who speaks out of turn. It’s a nightmare scenario, and another clear indication that the TSA is an odious insult to the very notion of America as a free country and needs to be defunded and ultimately abolished.

Given a recent survey which found that a majority of travelers were happy with the TSA’s performance and also In the interests of discovering exactly what level of indignity Americans will tolerate, Infowars is set to commission a poll to find out what passengers will tolerate when going through TSA checkpoints.

Watch a Fox News report on the taser bracelet below.