A fairly simple, fairly easy-to-do routine maintenance chore that’s sometimes not done routinely is changing out the fork oil in a bike’s front forks. It’s a job that’s easy to neglect because it’s easy to not think much about it. The forks are just “there” – and as long as they aren’t leaking and seem to be working ok, the temptation is to just ride – and not worry about it. After all, fork oil is in a sealed environment – and unlike motor oil, it’s not exposed to combustion (and combustion byproducts) or heat – and so, why bother? 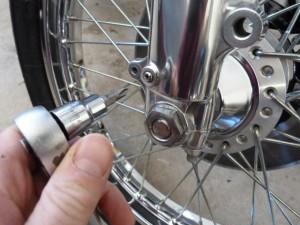 Actually, several of those assumptions are wrong.

Forks operate by hydraulic action. The oil is pushed through small orifices and valves within the forks as they cycle up and down with road irregularities and weight transfer (as during cornering and braking), providing the suspension dampening critical to stability and good handling. This cycling up and down heats the oil – and eventually, breaks it down. Moisture can also get in – even if the seals show no obvious signs of leaking. The net result is that, over time (and as a result of use) fork oil degrades just as motor oil degrades – and for many of the same reasons. Doubt it? The pic below shows fork oil with about three years’/5,000 miles of use (on the left) vs. what fresh fork oil looks like (on the right).

And when it does degrade, adverse handling and braking – and potentially costly problems with the forks’ internal workings – can be the result.

So, it’s a good idea to change the fork oil just as you’d change the motor oil. Changeout intervals vary from bike to bike (see your owner’s manual or the factory service manual for your particular make/model) but the general procedure is usually the same. First:

* Obtain the necessary quantity (and grade) of fresh fork oil. As with motor oil, it’s important to heed the manufacturer’s recommendations about such things as viscosity and application. Don’t use oil that’s too heavy – or too light – for your machine.

* Have a clean measuring cup (or similar graded container – so you can measure exact amounts of fluid) and a long-neck funnel on hand. The funnel will make it easier to pour the fresh fork oil into the forks without spilling any (which will make it hard to know how much actually got into the forks as well as make a mess of the bike). 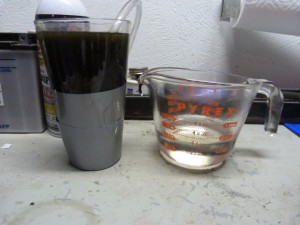 * Get the tools you’ll need to do this job. Typically, that means a screwdriver (or socket of the correct size) to loosen and remove the drain hole at the bottom of each fork – plus a wrench (or other correct sized implement) to turn out the cap bolt at the top of each fork tube. You’ll also want a small catch-can to collect the old fluid as it drains.

* Loosen/remove the drain screw on either the left or right-side fork (It’s less messy to do one at a time.)

* Place the catch-can underneath the drain hole.

* Stand the bike up and – using your body weight – push up and down on the front end to cycle the forks through their full range of travel. Old fluid should drain out of the hole each time you push down on the front end. Continue doing this until the oil no longer pours/squirts from the hole. Reinstall the drain screw/bolt.

* Pour out the exact quantity of new oil (for one fork) as specified in the owner’s manual (or shop manual) for your particular bike. 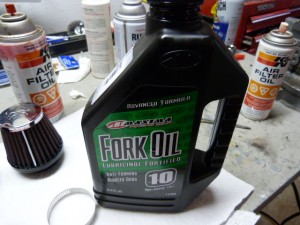 * Using a floor jack underneath the engine/frame (I like to insert a small block of wood between the jack and frame to distribute the jacking force more evenly and also to avoid scratching/dinging things) raise the bike just enough to take all the weight/tension off the front end, so that the forks are fully extended. This is done in order to prevent the cap you’re about to remove from ricocheting across the garage as you try to remove it – and also to make it easier to reinstall it after you’ve refilled the forks. If you don’t do it, the spring inside the fork will still be under a fair amount of tension – and that tension will be pushing on the cap. Fully extending the forks takes most – but not all – of the tension off the springs. Which means, less tension on the cap.

More on this in a minute.

* Now remove the cap on top of the fork tube – carefully, because it may still be under some tension and want to pop off as it is unscrewed. As a just-in-case, it’s a good idea to lay some heavy blankets or towels across the bike’s gas tank – to prevent any dings or dints from a wayward fork cap.

* Ease the cap off and put it aside. There may be a spring/keeper/washer visible in the fork tube. No need to mess with any of that.

* Using the funnel, pour in the fresh fluid – slowly, carefully – to avoid spilling any. If you spill any significant amount, you really ought to start over (drain the fork, etc.) because there’s no way to know how much you lost – and so how much is actually inside the fork. It’s very important to get the exactly right quantity of fluid into each fork or handling imbalances may occur. 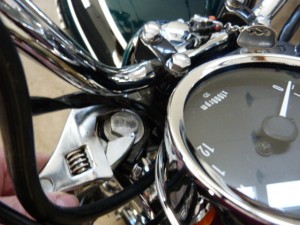 * Reinstall the cap. You may have to exert some downward pressure in order to get the cap to seat and begin to thread. Be very careful not to cross-thread! Once correctly started, tighten according to specifications (see shop manual).

You’re now done with that side.  Lower the jack – so you can cycle the front end – and repeat  the steps above on the other side.