Abuse people and they tend to get angry. Abuse them long enough – without repercussions – and the anger eventually explodes. It is an old lesson, often forgotten.

And which must, therefore, often be relearned.

British redcoats were hated for their haughty, contemptuous treatment of colonial civilians. This idea that the wearer of a red uniform was a special – sacred – personage, entitled to deference and different treatment. In particular, different treatment by the law. What a colonist dare not do, a redcoat could do with impunity. Or at least, without much fear of repercussions. It lead to Lexington and Concord. And to 1776

We are at the same juncture today.

Only our redcoats wear black and blue.

In Florida, one of these latter-day redcoats – a state trooper – literally walked away from any responsibility for causing the death of an innocent person (and severely hurting two others) who just happened to be in the way of his grossly negligent and arguably criminal conduct. 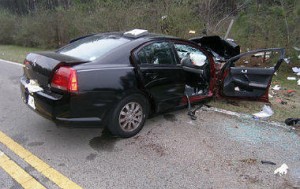 Here are the facts:

On Feb. 10 of last year, Florida Trooper Detrick McClellan heard a report over his cop radio that some kids were reportedly  throwing rocks from an overpass. Though not on-duty, McClellan chose to “respond.”

But it quickly became not so good. Because McClellan chose to respond by driving his car at speeds (in excess of 100 MPH) that would have landed any mere mundane in jail – and without his lights flashing or his siren wailing – ostensibly for reasons of stealth. Unfortunately, Michelle Campbell, her niece and a 12-year-old  child never knew what was coming as a result. McClellan lost control of his car in a curve with a posted maximum speed of 35 MPH, plowing into Campbell’s car – killing her and throwing the 12-year-old through the windshield, leaving her (and the niece) badly hurt. 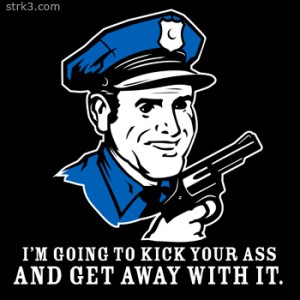 Now it gets really interesting – and really despicable.

McClellan was issued three traffic violations  – careless driving, speeding and  failure to use his emergency equipment – but he was not criminally charged. Because different rules apply to cops. A non-cop who merely drove his car at 100 MPH without hurting anyone would almost certainly face more serious consequences than McClellan faced for killing one person – and maiming two more. Because cops are held less responsible for what they do.

But that’s not the end of it.

McLellan was not even held responsible for his traffic citations. His case was recently dismissed because the officer who wrote the tickets very conveniently didn’t show up. Instead of continuing the case – as would almost certainly happen in the case of a mere mundane charged with a routine traffic violation – the judge announced: “Hearing no objection, or no one’s here, I will go on and dismiss the citations.” And the judge was correct. No one was there. Including the victims’ family members. Also conveniently, they had not been notified of McClellan’s court date. So they were not there to object when the judge threw out the tickets – and threw justice in the trash.

There is a video of McClellan’s fellow troopers laughing in court as the judge orders the tickets dismissed. Afterward, these”heroes” shake the hand of their fellow “hero.” (See the video here.)

One of the victims’ family members, Annekquah Knight, had this to say after McClellan walked away without so much as a $10 fine:

‘It was appalling and it hurt because I feel like they were cheering, rooting him on, for a death he caused … They knew he was wrong. I think it’s just because he was a trooper, and they look out for each other.” 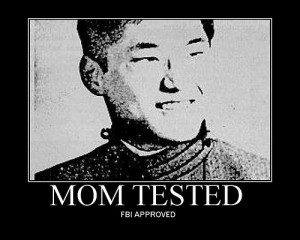 No, it’s much worse than that. The law looks out for the anointed – the wearers of uniforms, the holders of badges and titles of office. They are held to a different standard, invariably more forgiving. Another example being the case of one Lon Horiuchi – government sniper and murderer. Except he was not charged with murder, despite his clearly having committed one. Merely manslaughter – and even that was dismissed. This “hero” in costume murdered an unarmed woman holding an infant in cold blood. But he is a free man today because he wore a special costume while committing his foul deed. His victims, meanwhile, are mouldering in the earth.

The law also gives its sanction to thugs-in-costumes who torture three-year-olds in wheelchairs (see video below for that).

We are not permitted to resist – and even to express our contempt is sufficient to bring down a rain of abuse. We are expected to just take it.As much as they decide to dish out. While they laugh at us. It is an explosive mix. Either it will be defused – by restoring justice for all  – including those wearing special costumes – or, one fine day, something is going to go badly wrong.