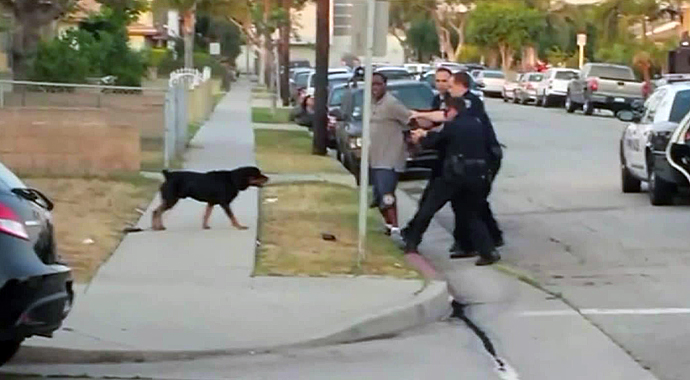 Then how come they’re so obsessed with “officer safety”? 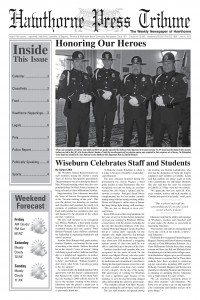 So fearful – and not even of any real danger to their persons? Isn’t the very definition of “heroic” an action that requires placing one’s own physical safety in jeopardy in order to secure the physical safety of others first?

Why, then, are we constantly urged to admire poltroons who insist that their safety always comes first? That the possibility of a Mere Mundane so much as mussing their uniform justifies the actuality of a physical assault by them as a preventative measure?

Who not only avoid the proverbial fair fight – but who insist on the unfair fight every time? Who – for instance – mob a 20-year-old college girl, screaming at her and flashing guns – over an alleged underage purchase of beer. (In fact, the girl bought cookie dough and bottled water when six armed “heroes” thug-scrummed her; story here.)

Who bark orders at people with the gusto of Stasi thugs, as in this example:

You’d think large men (and often large women) with large guns on their hips, the full weight of the state backing them up, wouldn’t be so on edge and terrified – so constantly worried that some ill might befall them – such that it’s necessary to pre-emptively tackle, stomp (or Tazer and shoot) women half their size, old people twice their age, gangly teenagers – and so on – all the while demanding that their helpless victims “stop resisting.”

And yet, this is the first resort of all-too-many “heroes” (hereafter to be referred to in quotation marks, for reasons that ought to be apparent) who in these latter days of the once-republic seem positively eager to turn every minor thing into a major thing. Who literally shoot first – and ask questions later. Who won’t so much as risk a tongue lashing before lashing out – physically – against people whose persons may be abused with near-impunity; who have next-to-no worry about being beaten/caged/killed themselves as a result of their actions – or even made to pay financially (sovereign immunity being another perk). 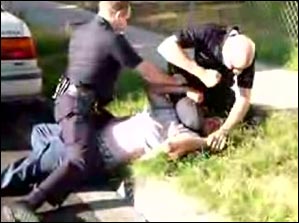 How about the recent “heroic” dog-killing in California? It is not an isolated case of “heroic” excess. This sort of thing is becoming a weekly occurrence.

A man uses his cell phone camera to video a group of  “heroes” doing a SWAT-style home invasion – probably of a home where arbitrarily illegal “drugs” were alleged to be. In any event, the man is clearly no physical threat to the proceedings – or those doing the proceeding. He is on the periphery of the scene, along with a number of other bystanders. But his videoing of the proceedings alarms – rather, it annoys –  two “heroes,” who begin to approach him. Check Takealot Specials and Woolworths Specials. At this point, the man – who had been taking his video while walking around with his leashed dog in tow – very non-threateningly walks back to his nearby car, shoos his dog inside, then calmly walks back to meet with the “heroes.” He is not belligerent; he made no attempt to flee. And more to the point, he violated no law as it is still legal to video “heroes” in public – just as they are at liberty to video us when we are out in public. Whether they like being filmed is as irrelevant (in terms of the law) as whether we like being filmed by them. Except of course, that “the law” doesn’t matter when “heroes” are involved.

Thus: Even though the man had done nothing illegal, nor had he done anything to suggest he was any sort of physical threat to the “heroes,” he was accosted – physically assaulted – by a pair of “heroes.” Two against one – the unfair fight, again – and over nothing. 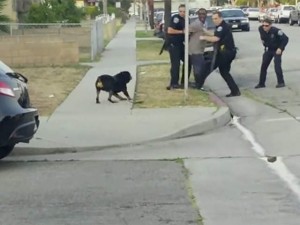 Whereupon the man’s dog – who witnessed the unprovoked assault of his master by two strange men – frantically leapt out of the car’s open window and rushed to his master’s defense. And for this was summarily executed by the “heroes” . . . in the name of “officer safety.”

Of course, it would have been a whole lot safer for all involved had these “heroes” reacted appropriately – that is, like normal human beings who are obliged to keep their Inner Chimp in check as opposed to costumed and armed thugs  who know they can over-react without consequences.

The man was in a public area, in no conceivable way “interfering” with anything. However, he was guilty of challenging the unwritten (but mercilessly enforced) law that one must never treat a “hero” disrespectfully. And taking video of “heroes” is regarded (by the “heroes” themselves) as precisely that – an affront to their authority. It is much worse than merely questioning what they do. Because it is a record of what they do. Which implies that what they’re doing at the time of the recording might not be quite right. 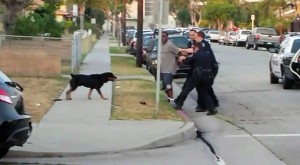 And that is the cardinal sin – as “heroes” see it.

Which is why it is imperative they be recorded – that they know they’re being recorded. That what they do will be seen by the world.

It is our only – and perhaps, last – defense.

“Heroes” ought not to mind.