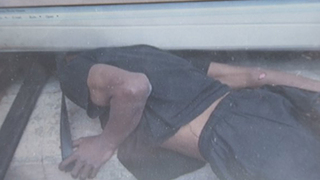 If you’re a gearhead, you’ve probably got a lot of stuff in your garage. Expensive stuff. Collectible cars. Bikes. Tools and equipment. There might be more value in your garage than inside your house. But ironically, the garage is often the least secure part of the house. Thieves are well-aware of this. 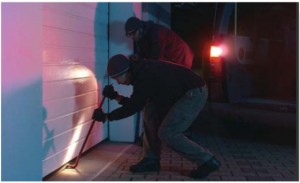 You should be, too.

Here are some suggestions to avoid coming home – or waking up to – a cleaned-out garage:

* Be discreet about what you’ve got.

Keep the garage door closed unless it needs to be open. Don’t flaunt your stuff. Thieves are opportunists. When they see an opportunity – your toolbox just sitting there, for instance – they may decide to take advantage of that opportunity. Or, they’ll make a note to come back later – having seen what you’ve got and wanting to make it theirs. If your door is closed, there’s nothing to see. Probably, they won’t give what’s inside much thought – and will move along to the next – the obvious – target. 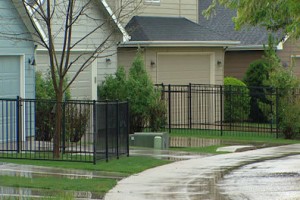 Related: If you’re getting ready to build a new home, think about locating the garage in the back – or locating the door/entrance so that what’s inside isn’t readily visible from the street when the door is open. If you’re stuck with what you’ve got, use landscaping – shrubs, trees and so on – to obscure the view. Keep pricey antique cars covered when they’re not being worked on. Get one that’s big enough to hide the wheels, too. They’re a dead giveway to something other-than-Camry underneath.

If the garage has windows, get blinds.

* Secure what you’ve got. 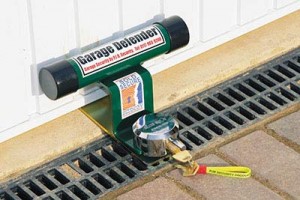 When we bought our current house, it had a side entrance door to the garage that a burglar could have defeated with an elbow. Because the upper half was glass-paned. Just smash the glass, reach in, unlock the door and in like Flynn. One of the first things I did after we moved in was to get rid of that door. I replaced it with a solid metal door – with a heavy deadbolt in addition to the normal lock. For even more protection, add slide-type deadbolts at top and bottom – with the mounts drilled with heavy duty screws into the frame surrounding the door.

Though not impervious, this door will require a lot more time and effort to defeat. The average smash-and-grab thief – who is often a teenager – will likely not bother. And that probably means your at-risk profile is cut by two-thirds. 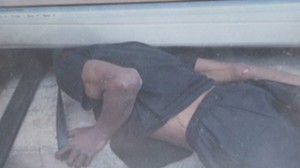 For similar reasons, I also replaced both garage doors. The old ones had windows – which not only let in sunlight (bad for the paint and chrome of collectible old cars) but could also let in a thief. The new doors are solid – and they have a physical lock on the side rails I can use for an additional layer of security. I recommend such a system – which many new garage doors offer or which you can easily rig up yourself to an existing door using slide-lock hardware available at Lowes or Home Depot or any hardware store.  They make it all-but-impossible to manually raise the door from the outside. This countermeasure is particularly important if you have an electric opener. Keep in mind that it’s fairly easy for a thief to obtain a door opener with the right code (or hack your system, especially if you have an outdoor keypad). A physical lock will thwart anyone trying to open the door with an ill-gotten remote. 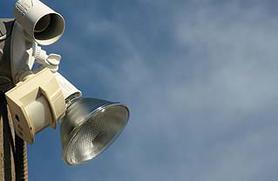 Adding cameras – in particular, obvious cameras – to the outside perimeter is also a really good idea. Even if they’re fakes – they have deterrent value. Ideally, get ones that have a blinking red light or something similar, so that anyone prowling around will see that they’re being seen.

Bright flood lights with motion sensors are also good. Mount them up high, so that it’d be hard for someone to get at them at – and turn them off.

I like to leave lots of .45 brass and 12 gauge shotgun shell casings sprinkled around entrance doors and windows. It sends a message: Crazy redneck – crazy armed redneck – lives here.

Remember that thieves are hyenas – they like to prey on the weak and helpless. If you’re obviously neither, the odds are good they’ll try elsewhere.

* Make your stuff harder to steal.

Tools should be secured in heavy, hard to remove/move (and locked) pro tool cases – ideally, cases permanently fixed to hard points such as a concrete floor or heavy workbenches. Locked cabinets (metal, ideally) bolted to the wall studs work well. 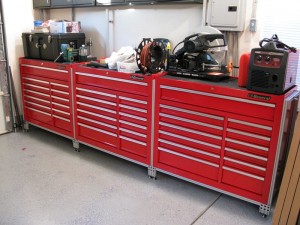 There are several ways to discreetly rig a vehicle so that it won’t start or is difficult to move. A simple battery disconnect switch serves two purposes: It’s a theft deterrent and it helps avoid running down your vehicle’s battery while it’s just sitting. You can buy a disconnect switch at most auto parts stores – or online. They’re generic, fit any vehicle. Or, simply disconnect the hot wire to the ignition coil. The engine will crank – but will not start. A steering wheel lock will make it very hard to drive the vehicle even if the thief manages to get the engine started. An eye bolt drilled into a concrete floor provides a secure anchor point for a chain to keep your bicycle (or motorcycle) where it belongs.

None of these things are absolute defenses, but each one involves a layer of time and hassle – for the thief. The greater the time/hassle factor involved, the less appealing your stuff is to thieves. 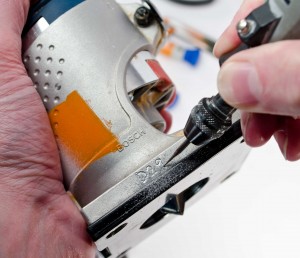 * Make your stuff easier to get back.

It’s a good idea to mark your vehicles (as well as expensive tools/equipment) with distinctive – and known only to you – identifying marks such as your initials. Use a punch or Dremel tool to do this. Document each mark and the vehicle/equipment, ideally using a camera or video recorder. This way, it’ll be easier to prove the item is yours if it’s found in someone else’s possession later on.

Find out whether your homeowner’s policy covers the full replacement value of your tools and equipment. A standard homeowner’s policy on, say, a $250,000 home may not cover the $20,000 you’ve got invested in your roll-out chest full of Snap-on sockets, your 300 gallon air compressor and all the other stuff you’ve got. Confirm the details of your policy’s coverage – in writing – with your agent. It’s also a very smart idea to do a full inventory of everything you have – with high quality photography or video for back-up in the event you do get robbed and need to verify the extent of your loss. 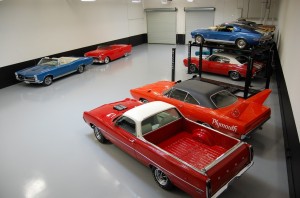 Similarly, you might want to consider taking out an agreed value policy on your antique/collectible vehicles. If your vehicle is stolen and not recovered, you will then receive the previously agreed-upon value listed in your coverage. There will be no haggling after the fact over what it was worth. This is particularly important if you have a car you initially bought as a clapped-out hulk but subsequently poured a lot of time and money into. Because if you don’t have an agreed value policy – based on what your particular car is worth – the insurer may only compensate you for the “book value” of the hulk – as opposed to its value as a meticulously restored show-winner.