Want to know why Republicans – especially Republican “conservatives” – are getting zero traction politically as well as philosophically against the “liberals” they claim to oppose? Why they are a spent force? 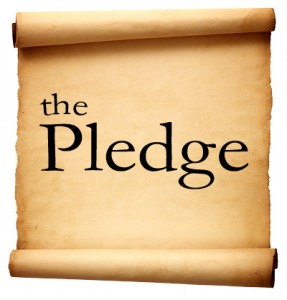 It is because they’re hypocrites. Pots calling the kettles black.

You cannot – to cite just one example of their intellectual-ethical disconnect – denounce welfare  . .  while defending Social Security. Because they’re both the same thing: The taking by force of one man’s property (his money – and if that’s not handed over, then his physical property will be taken and transmuted into money) in order to hand it over to some other person. That is the essence of the thing. It’s irrelevant whether the beneficiary of the largesse seems to you to be worthy – as “good Republicans” view the flag-waving oldsters on the dole who “paid in” to the system (but who were merely taxed in their turn and who now wish to prey on others to recoup their losses). What’s relevant – the only relevant thing – is, simply: Do you support use of government threats and violence to take other people’s property for your (or someone else’s) benefit for any reason? If you do, then you cannot object to other people’s advocacy of the same thing for their own reasons. 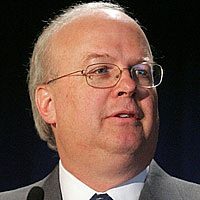 Not, at any rate, without being an obvious hypocrite. A Babbitt. A Grifter – who denies he is a grifter. Which is to say, the most odious sort of grifter. The one who brays about his morality – while denouncing others for being (as he styles it) immoral.

Which is exactly – and rightly – how Republicans (especially “conservative” ones) are viewed by liberal Democrats. To their credit, they – the Democrats – at least have a twisted type of honesty on their side.

They are openly for transfers-at-gunpoint.

Republicans are, too – of course. They merely regard those favored by Democrats as illegitimate. Republican support for the use of force to obtain the property of others is “different”  . . . somehow. 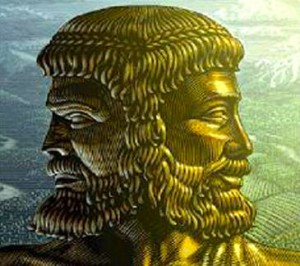 The how is hard to puzzle out.

Either it is – or isn’t – acceptable to take from Smith to give to Jones. To make an exception – any exception – is to surrender the field. No, worse. It is to embrace the enemy.

And that’s exactly what Republicans are – and why this country continues to descend ever deeper into the morass of redistributionist collectivism. Tweedle Dee – and Tweedledum. Is it not madness to expect a prison to cease the practice of executing prisoners by periodically giving the inmates the opportunity to vote for a warden who favors lethal injection as opposed to the gas chamber?

The only way to effectively challenge wealth transfer at gunpoint is to challenge the idea of it – as opposed to one or another particular transfer-at-gunpoint. 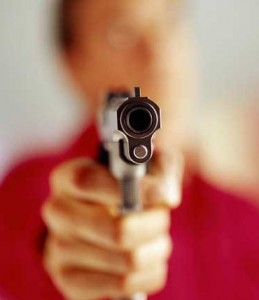 This, Republicans – and most notoriously, Republican “conservatives” – have manifestly failed to do. They defend the transfer-at-gunpoint programs they favor. Which they view as ethically acceptable.

Which is why Republican conservatism is a failed ideology. Because it is not an ideology at all. It is merely a watered-down (and hypocritical) version of the ideology espoused by its supposed opposite, the “liberal” Democrats.

They are birds of a feather. Opposing sides of the same Janus. They argue like hyenas over the spoils. Not about the idea of taking spoils at all.

This is why the Tea Party is a bad joke. Why there’s no debate about “the issues” – at the national level at least; and usually, at the local level, too. The basic premise – redistribution at gunpoint – is never challenged. Only the degree of the redistribution – or its object. Which is why this country – its people – will continue to practice a form of cannibalism that becomes more and more rapacious, since the “needs” upon which this cannibalism are based are limitless in principle – and increase exponentially with each election cycle – while the resources available to satisfy these needs are limited. And the incentive to produce the resources to be divvied up naturally declines with each passing year. It is inevitable that a critical mass of people will eventually shrug – or simply join the ranks of the looters. 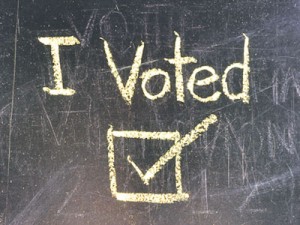 Which in fact is exactly what’s happening. Half the country is on the take , in one way or another.

Looting will eventually become a matter of literal survival. But only a temporary one. Because soon enough, there will be no one and nothing left to loot.

And neither the Democrats nor the Republicans have a solution – because they are both the source of the problem. And if you support either of them, then so are you.

If that statement made you mad, read no further. There’s no point. I cannot reach you – ideas cannot reach you. You are on one side – and I am on the other. No bridge can exist between us. In fact, I intend to burn the bridge. I want to leave you on the other side of a chasm so wide that you no longer have any physical power over me.

Here is how I will do so, beginning with one of the wealth transfers at gunpoint so favored by “good Republicans” – Social Security:

I don’t want any.

Even though I have been forced to “contribute” for 25 years. Even though I am “entitled” – under your system of wealth transfer – to my “fair share.”

Because I refuse to be a thief – or the beneficiary of thievery. 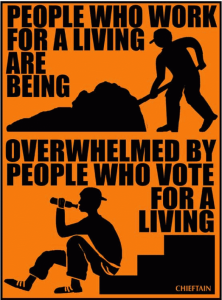 You and your ilk will continue to forcibly take my money in order to pay for your “benefits.”  There is nothing I can do – yet – about that. I know, also, that I will never recover the mountain of my money already taken by threat of violence over the past several decades of my working life. It is long gone, transferred by violence to people I don’t even know.

But what makes me different – and what I hope will make others who read this and decide to follow my example different – is that I know I’ve been robbed and that my having been robbed does not justify my robbing others in turn. I will break the cycle. I want no part of stolen goods. Keep your “benefits.”

I will keep my self-respect.

And by doing so, deny you yours.

I will force you to come to terms with what you are – a looter.

The same goes for everything that’s of a piece.

I will not demand that taxes be imposed on you in order to “help” my children. If I produced them; they are my obligation – and one else is obligated to provide funds to assist me in raising them.

My health care is my business. Yours is yours.

I will not “ask” that government subsidize my business – or bail me out when it fails. Because I know that any such assistance I receive will come as the result of extortion and threats levied at people who owe me nothing except the goodwill that ought to exist among civilized men.

I will never stick my hand in your pockets – or my nose in your affairs – and only ask the same from you in return.

I don’t give a hoot who you marry, or what you put into your body – or how you elect to live. So long as you don’t expect me to pay for it – and don’t cause me (or anyone else) a provable physical harm as a result of what you do – have at it.

And go in peace.

No more special privileges; no more theft-by-ballot. No more anything – except respect for the equal and inalienable rights of every man to be free to pursue happiness as he sees it.

An ideal which many Americans once believed in.

And which, in time, they may once believe in again.