What was it Bill Murray’s character chanted in Meatballs? It just doesn’t matter. 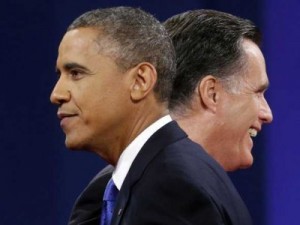 Or rather, it might – but not for the obvious reasons.

In that sense, it just doesn’t matter. We will have more wars, more rent-seeking by “connected” big business; more Officer 82nd Airborne, less Andy Griffith. More hassles – less freedom. It just doesn’t matter. The NFC – that is, Republicans – will cheer their team, regardless of its actual performance. Just as the AFC – Democrats – will cheer their team, irrespective of what it does. The same “liberal” Democrats who have been silent these past going on four years of Obama launching new wars, bombing fresh civilians, drawing up executive kill lists, renewing the “Patriot” act (and enacting the even more egregious National Defense Authorization Act)  and pursuing the war on some drugs even more aggressively than the beady-eyed Chimp who preceded him will be just as silent for the next four years of similar and worse outrages – so long as it’s their guy doing it.

Similarly, the same “conservative” Republicans who are crying about Obama’s abuses will forget all about them the moment it’s their guy doing the abusing.  Hell, they already have. They’re urging people to vote for the author of Obamacare to replace the implementor of Obamacare! Anything’s ok when it’s your guy doing it. This is the “philosophy” of Republicans and Democrats alike.

But here’s how the results of tomorrow’s (s)election may matter: 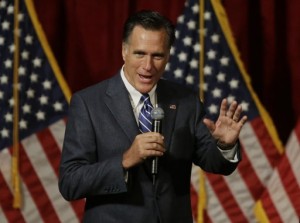 If the left-wing authoritarian wins, it may give anti-authoritarians a shot in the months and years to come. Because the left-wing authoritarian is an honest authoritarian. He says openly that the Great Collective’s will – as embodied by the Collective’s Dear Leader – is paramount. There is no I – only “we.” And he will tell us – at bayonet-point – what it is that “we” shall have and do and not do. This will help to focus matters. It will be clear – or at least, more clear – which side of the line you’re on. It is possible that a viable opposition might coalesce. Not necessarily a physical opposition – not at first. But an intellectual opposition. Enough people may question – and that could lead to action.  If Dear Leader Obama is (s)elected for another term, at the end of that term – if America still exists – it will be easier to organize an effective – because principled – opposition. Because it will damn hard for the Republicans to bring forth another Obama Light such as Mittens Romney. And if they did, it might just be the straw that finally breaks the proverbial camel’s back – and causes enough people to make a difference to give the old flusheroo to the GOP – and turn to other venues, such as the Libertarian Party and (perhaps) non-jefes like Ron Paul and Gary Johnson. 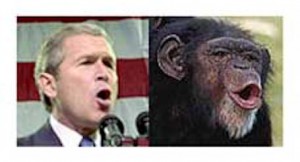 What happens when a freedom-toutin’ flag-on-the-lapel fascist becomes Dear Leader? Just as liberal Democrats shut up about Chimponian abuses when committed by their Chimp – Obama – so also “conservatives” will euphemism, apologize for and otherwise sweep under the rug precisely the same (and worse) deeds when it is their Chimp performing them. Worse, the average Joes and Janes out there – the not particularly philosophical/political people – will decide that “conservatism” – what they have been taught to call by that name – is a disaster. Venal, hypocritical – a system of money-bags double talk in the service of the Screw You elements that run Wall Street and the giant corporate cartels.

And by god, they’ll be right. 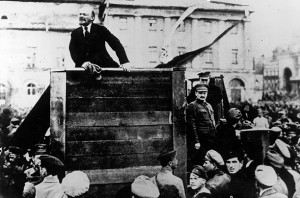 Meanwhile, the voices of liberty advocates will be drowned out – and denounced. They will be anathematized as “exploiters” and “selfish” – despite being the visceral enemies of such things. It will not matter. The degraded masses – blind with the fury of the abused and ignorant – will turn on them and everything that smacks of “less government.”

They will in fact demand more government.

And that is when things will turn truly ugly. Because that will be the moment when a new Lenin – or Hitler – someone like Obama or Mittens, but possessed of truly revolutionary zeal that neither of the current milquetoast glad-handers – these latter day Kerenskys and Von Papens – come close to possessing.

And that will be the beginning of the end.