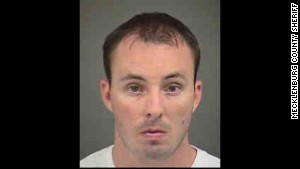 (CNN) — Police in North Carolina shot and killed a man running toward them Saturday morning — but he may have just been looking for help after a car wreck.

Officers responded to a “breaking and entering” 911 call at a home in Charlotte.

The homeowner told dispatchers that a man had been knocking on her door repeatedly.

Police say that when they got to the scene, a man matching the caller’s description ran toward them.

One of the officers fired his stun gun, but it was “unsuccessful.” Another officer then opened fire, police said.

Jonathan Ferrell died at the scene. He was shot several times.

Ferrell was 24 and a former football player at Florida A&M University.

Police found a wrecked car nearby, indicating that he may have been trying to get help.

The crash was so severe that authorities now believe Ferrell had to climb out of the back window, another affiliate WBTV reported.

He ran to the closest house for help.

The woman inside thought it was her husband.

“To her surprise, it was an individual that she did not know or recognize,” Monroe told WBTV. “She immediately closed the door, hit her panic alarm, called 911.”

The man stood outside and “continued to attempt to gain the attention of the homeowner,” a police statement said.

Police have charged Officer Randall Kerrick with voluntary manslaughter — a felony. He turned himself in Saturday afternoon and was being held early Sunday on a $50,000 bond.

Police used “charged” and “ran” and “advanced” in their description of what Ferrell did.

There were three officers at the scene, but Kerrick was the only one to use a gun.

All three officers have been placed on paid leave.

A charge of voluntary manslaughter means the person used excessive force in self-defense, or carried out the act without intent to kill.

“It has devastated a family as well as caused a great deal of sadness and anxiety in our organization,” a statement said.

He had at least one brother, Willie, who played with him at Florida A&M.

“We loved him. Our family loved him,” his fiance’s mother told WSOC.

His 25th birthday would have been next month.