American law enforcement is a very sick entity these days. 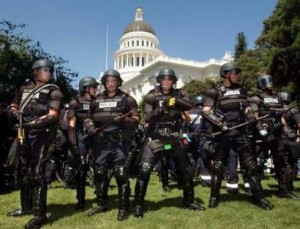 American police are very much like Tokugawa Shogunate-era Japanese samurai, in that they have EGO, POWER and WEAPONS, but they have no PURPOSE.

The samurai were soldiers being used as police, and they resented the hell out of it. They had been raised to seek glory in battle, and the task of riding herd on a restive population of serfs disgusted them, but hey, orders are orders.

Consequently, they reacted harshly and violently to any perceived “lack of respect” or petty infraction. They were even empowered by The State to murder any peasant who acted ‘disrespectfully’ toward them.

Except he’s NOT a soldier playing cop, but rather the opposite. He may have once been a soldier, but right now is demonstrating why former military personnel should never be given badges.

Soldiers and police properly have completely different mindsets, and even honorable and decorated military service should be a lifetime bar to employment as a police officer.

Soldiers are trained to yell and scream, to follow orders immediately and without question, to never contemplate the rightness or wrongness of those orders and ultimately to regard anyone who is not dressed like themselves as the enemy.

This is not a healthy mindset for police, who are supposed to be peace officers, not an occupying army. Part of the problem with this soldier mindset is that it never completely fades away, “Once a Marine, always a Marine” describing the condition pretty well.

And speaking of soldiering, I think SWAT teams are actually an end-run around Posse Comitatus, the law that forbids the use of the military in the enforcement of civilian law.

And they should act like them. Oh sure, there are violent, heavily-armed criminals out there, but part of the reason they’re violent and heavily-armed is because they think they’ll have to fight the army in order to rob that gas station.

Besides, dudes holding up 7-11s with assault rifles and gang bangers doing drive-bys with AKs are Hollywood fabrications anyway.

This one’s gonna get me on a list somewhere…