New York City Mayor Michael Bloomberg called for the nationwide reform or repeal of Stand Your Ground laws today at an event in Washington D.C. to announce the Second Chance on Shoot First campaign. 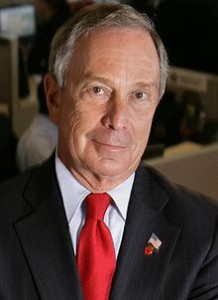 The campaign is intended to prevent killings like that of17-year-old Trayvon Martin and Bloomberg blamed the National Rifle Association for the Florida law that many feel empowered George Zimmerman to shoot the unarmed Martin.

“In reality the NRA’s leaders weren’t interested in public safety. They were interested in promoting a culture where people take the law into their own hands and face no consequences for it. Let’s call that by its real name, vigilantism,” he said. “The NRA should be ashamed of themselves. This has nothing to do with gun owners rights. It has nothing to do with the second amendment.”

Bloomberg, who was joined by civil rights leaders and Florida State Sen. Chris Smith, said the laws had undermined the justice system and have done harm to public safety.

“They justify civilian gunplay and invite vigilante justice and retribution with disastrous results,” he said.

ABC News reached out to the NRA for comment, but it has yet to respond.

Two dozen states have enacted laws similar to the one in Florida, and while the laws very from state to state most grant varying degrees of immunity to anyone who uses deadly force in self defense.

Bloomberg cited statistics from the Federal Bureau of Investigation and the Florida Department of Law Enforcement to show an increase in justifiable homicides after the Stand Your Ground laws went into effect.

In Florida, he said, justifiable homicides increased from 12 per year to 36 per year when the five years before and after the passage of the law were compared.

Bloomberg was also joined by former Army Major Jon Soltz, the chairman of VoteVets.org. Soltz said that U.S. soldiers fighting in Iraq and Afghanistan had a higher standard of when to use deadly force than Americans who lived in states with Stand Your Ground laws.

“There is no shoot first law for our troops in Iraq or Afghanistan. We cannot just shoot somebody because they have a hijab on in Iraq and kill them and say we’re scared. Everybody in Iraq has a weapon and all U.S. forces are always scared,” Soltz said. “This is a legal protection in these states that is actually afforded to Mr. Zimmerman that is not afforded to our troops in combat. Unless I’m wrong I didn’t think Florida was a war zone.”