I don’t “support the troops.”

But of course it’s not really  the troops  we’re constantly pressured to express unconditional, unquestioning – even fawning – support for at nearly every turn.

“The troops” really means, America’s wars; the “defense” establishment and all that profits from it – a conceptual bait and switch worthy of Dr. Goebbels himself. The phrase somehow transforms understandable concern over the fate of some poor kid with a 12th grade education from a trailer park in Coaltown West Virginia – who faced the choice of soldiery or a career at Wal-Mart – into supporting America’s endless bullying of the world.

And of course, the “interests” (read: profits) of its corporate controllers.

The propagandists have thus made it all but impossible to question America’s endless jackbooted stomping of the planet merely by mouthing the magic phrase: Don’t you support the troops?

Might as well tell ’em you’re into having sex with donkeys while dressed as a clown.

Think the Iraq war was a bad idea? Think we have no business in Afghanistan? That we’re stacking up corpses on both sides (mostly theirs) for no morally justifiable reason? Seize him!

He doesn’t support the troops!

Ok,maybe they don’t actually seize you…. yet. But how long will that last? To voice even the mildest criticism of any use of American military power, any thrust into the affairs of other countries and other peoples, is already viewed in many quarters as the moral equivalent of treason. To do so subjects the speaker to vitriolic abuse and near-universal condemnation. Do you suppose the government that already tortures people as official policy, which asserts its right to extrajudicial murder, will brook such “treason” for long?

If you do, I recommend reading (or re-reading) “The Gulag Archipelago” and also “Thirty Days to Power.”

And by the way: When did “troops” come into common currency, replacing “soldiers”?

I noticed it happened right about the time they – that is, our corporate masters – began having their puppets in DC and on TV talk incessantly about the “homeland.”

This is an interesting juxtaposition.

I read a great deal about history, especially about World War II and Nazi Germany.

The Nazis talked a lot about the “troops,” too – and of course, they had the “homeland.”

Americans never used to use those terms. Not until quite recently.

We talked about soldiers and the army; America was our country – not the “homeland.”

Is it not a curious coincidence that as America metastasizes into something ominous and dark, something that more and more smacks of something very much like Nazi Germany – maybe not the jackboots and operatic speeches, but most certainly in terms of the degradation of the individual, of big business in bed with big government; the evisceration of due process and the rule of law; the public cowed into submission (and roused to hatred, but hatred directed toward some external “other”); the pervasive militarism; the easy violence; the shrill politicians with oversized flag pins on who urge veneration of the state  … that it has adopted the precise terms once used by the Nazis themselves?

Just 20 years ago, if a politician or public person had uttered the term “homeland” in a speech, he would have been suspected of having a signed copy of Lincoln Rockwell’s picture on his office wall.

It would have raised eyebrows, at the least.

So also this “support the troops” business.

It’s a brutally effective shout-down, no need to even raise your voice. It is like the way a southern belle can cut your legs off with an absolutely vicious comment – but by adding “bless your heart!” at the end of it, conveying nothing but the very best of intentions.

The repetition of this catchphrase not only enables corporate tools such as George W. Bush and Barack Obama to get us into wars of imperial aggression against countries that have done us no violence  – where “the troops” are used as casual cannon fodder – it makes it virtually impossible to get them out of the charnel house. A soldier is an individual human being; it is easy to visualize him – and to feel sympathy for him. “The troops”? An abstraction. Do you know a “troop”? It’s a camouflage blob out there… somewhere.

And let’s be honest: No one really gives a damn – outside of the families whose sons and daughters have become “troops.”

If the general public did give a damn, we’d not still be in Afghanistan, ten years on – the body count steadily ratcheting upward.

Soldiers like Pat Tillman and Jessica Lynch? Useful props. The Comrade Ogilvies of our time (http://www.servinghistory.com/topics…de_Ogilvy_1984). Their lives matter only insofar as they create sympathy for “the troops” – and, thereby, support for the wars.

What was it Stalin said? A single death is a tragedy. A million deaths is a statistic.

So, although I do I have a great deal of sympathy for the individual soldier, most of whom find themselves in uniform for decent if misguided reasons, or as a result of brutal economic factors – I don’t support “the troops.” Because I do support the individual soldiers. I have no desire to see them killed or maimed. Or have them kill or maim anyone else, either – unless it is made absolutely necessary and justified by an actual invasion or attack upon America by a foreign power.

Since that hasn’t happened since at least the 1940s (and really not since 1812, the last time a foreign power – Britain – sent its “troops” against us) the only reason to “support the troops” is to support the armaments industry and those who feed off it, such as flag-humping politicians of the neoconservative Republican type in particular.

And there’s no way any decent human being could ever support that – or them. 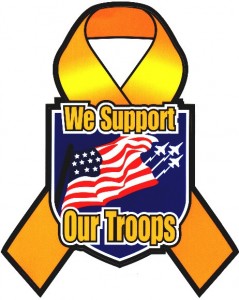