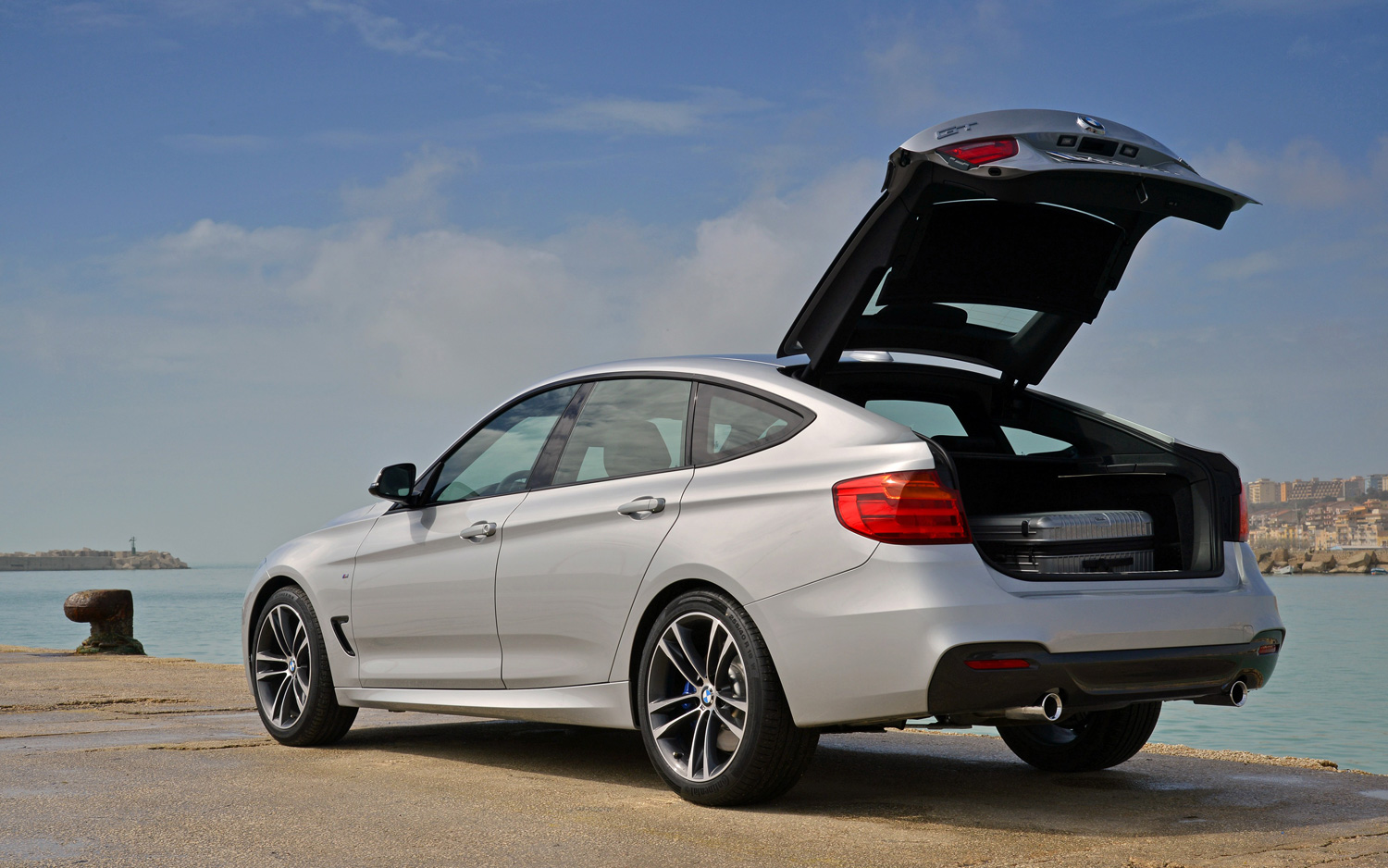 Why did Porsche bring forth the Cayenne SUV and the Panamera sedan? For the same reason BMW is trying to sell hatchback versions – oops – don’t say that out loud! –  of the 3 and 5 Series sedans: To draw in potential buyers who love the brand – and love the image – but need just a scooch more in the way of everyday practicality. Four doors, maybe. Or, more room in back. 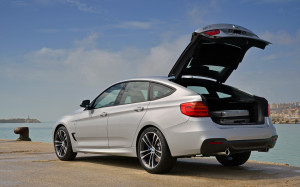 Purists will cry – sellout! And there may be some truth to this. But it is also true that to keep on making cars at all, a carmaker must make money selling them. This can be done by charging more for each one – or making less on each one, but selling more of them.

So far, though, the 5 GT has been something of a belly flop. Panned for its looks, its weight – and at least implicitly, for its layout. 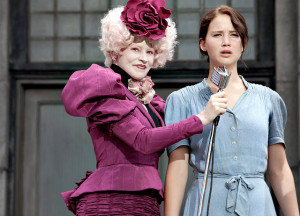 Consider it this year’s tribute from the Bavarian District to the annual Hunger Games.

The 3 GT is a long wheelbase, hatchbacked variant of the 3 Series sedan – based on the Chinese-market BMW 3.

It has 4.3 inches more wheelbase, sits 3.2 inches higher and has 4.1 inches more backseat legroom than a 3 Series sedan – and more than twice the cargo room. 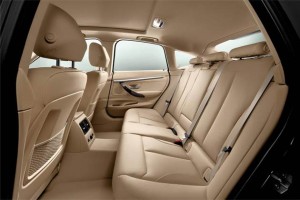 It also comes standard with BMW’s xDrive all-wheel-drive system (optional in other iterations of the 3 Series) and a pop-up decklid spoiler that automatically deploys at about 40 MPH.

Because of the nonexistence of competitive lux-brand hatchback sedans, the BMW GTs are pretty much in a class by themselves. 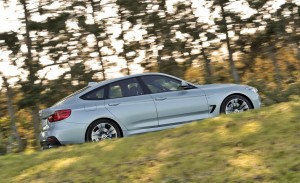 More legroom in the second row than in the 5 Series sedan – and nearly as much as the 7 Series sedan.

More cargo room than a 3 wagon.

Lives up to the GT – Gran Touring – moniker on the highway. 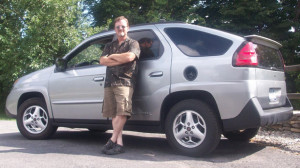 Hundreds of pounds of additional curb weight – no additional hp to compensate for it.

It seems odd that BMW would diversify the 3 Series in terms of bodystyles but limit the drivetrain choices available in the new (GT) bodystyle. While the regular 3 Series offers three engines and two transmissions, the GT offers just two engines – and one transmission. 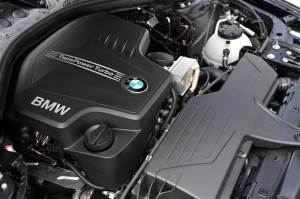 However, in the GT, both engines are paired with an eight-speed automatic only.

There is no manual transmission option.

And there is no diesel engine option.

BMW’s decision to not offer the GT with the six-speed manual that’s available in the 3 Sedan  kind of makes sense in that the GT is a bigger, heavier car designed mostly for highway work. 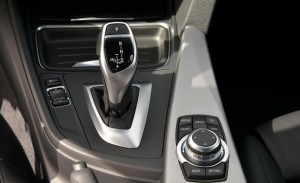 And for the typical American driver – who prefers to text and talk rather than shift and drive.

But the decision to not offer the 2.0 liter turbo-diesel engine that’s available in the U.S.-spec 3 Series sedan (and European market 3 GTs) seems odd given the GT’s putative role as a more practical version of the 3 Series. And not merely fuel efficiency-wise (though 45 on the highway is an appealing prospect in its own right). The diesel’s healthy low-and-mid-RPM torque output (280 ft.-lbs. at 1,750 RPM – maintained almost to redline) would help mask the GT’s 4,010 pounds of curb weight – vs. 3,295 pounds for the RWD 3 Series sedan.

Part of the reason for the GT’s well-marbled beef is of course the standard AWD set-up. The xDrive system fattens up the 3 sedan by 300 pounds, to 3,595 lbs. But the GT is also a bigger – and so, even heavier – car. 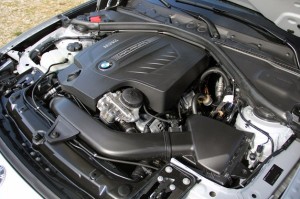 For a high-end car, this is slow.

Gas mileage with either engine is solid: The 328i GT’s 22 city, 33 highway is actually only slightly less than the RWD 328i sedan’s 24 city, 36 highway. And somehow, the bigger/heavier 335i GT achieves exactly the same 20 city, 30 highway EPA rating as the RWD 335i sedan with the manual transmission. (Equipped with the more fuel-sippy eight speed automatic, the 335i sedan does better, but not a whole lot better: 23 city, 33 highway.)

Both the 2.0 liter (gas) and 3.0 liter engines require premium fuel. 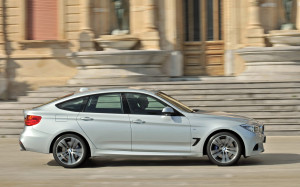 This is not a numb or evil-handling (or even un-BMW) riding/handling car. It’s not as quick – being heavier. And – because of the extended wheelbase and higher center of gravity – it’s not quite as lithe in the curves. But it still corners better than any other lux-brand hatchback sedan… of which there are none.  And the ride quality is very much BMW – firm and smooth as a 20-year-old cheerleader’s belly.

I disliked just one thing about driving the GT: The joystick thing BMW uses in place of a gear selector for the eight-speed automatic.

It is a cold, soul-less interface with absolutely no tactile feedback. You sort of tap/pull it forward (or backward) to access rather than engage Drive or Reverse. Then depress the top button to engage Park. Numbness personified. It is like dragging and clicking an icon on your desktop.I can’t argue with the function of it – but I hate the feel of it.

Or rather, the lack of any feel whatsoever. 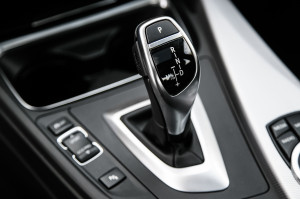 You have to watch the dashboard digital display to confirm you’re in Drive (or Reverse) or Park. The toggle is clean and high-zoot looking, in an IKEA-esque sort of way. But I’d much prefer a gear selector that gives me the the physical sensation of selecting a gear – and without having to visually confirm what I think I just selected.

Thankfully, BMW provides excellent driver-selectable shift programming as well as accessory paddle shifters for manual/driver control of each gear change. Select Sport Plus and the eight speed drops down two gears – and you are ready to rock and roll. And unlike many other automatics with manual paddle controls, it will automatically revert back to steady-as-she-goes when you’re done rocking and rolling. If you, for instance, blast through the first four or five speeds at full-tilt to get up to highway speeds, but then back off the gas once you’ve slotted into traffic, the big-brained automatic will take note of the chilled out situation and automatically kick up to seventh and eighth – even if you forget to. And, of course, it will prevent you from inadvertently overspeeding the engine (and possibly breaking something very expensive) by limiting manual downshifts in accordance with your road speed. No dropping to second at 70 when you really meant for third. 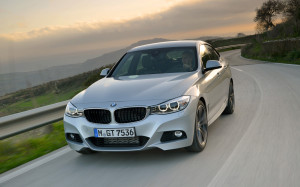 Given all those gears to play with – and keep track of –  this is a good thing indeed.

The GT’s handling has been compared  – unfavorably and arguably unfairly –  with the regular-wheelbase (and much lighter) 3 Series sedan. Yes – of course – the 3 sedan is nimbler, more of a ballerina pirouetting through the apexes. It ought to be. It’s a more focused car.

Which inevitably means, a more compromised car. Its shorter/sportier wheelbase means a cramped back seat not really fit for adults – and a Miata-sized (13 cubic foot) trunk. The 3 sedan is just the ticket for a single dude – but not so great for a dad (or a mom). Now – also of course – purists while howl about considering such breederific things when designing a BMW. But BMW’s gotta earn a dollar – and if you want ’em to keep on making light and tight 3 sedans and such like, it’s probably inevitable they’ll also have to make more stuff for the kid-encumbered, too. The people who want to buy BMWs – but need them to be at least plausibly practical BMWs, too. 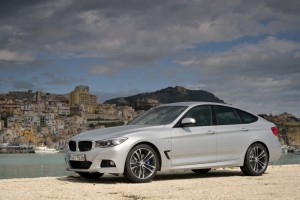 Given BMW already sells a wagon version of the 3, why the hatchback GT?

Simple: Americans – as a rule – do not like wagons much. Mind, they like the idea of extra space for people and stuff. They just don’t want it to be in wagon form. BMW figures they can sell the idea  – the space –  if it’s wrapped in a less overtly wagony package.

Hence the hatchback. These do sell well here.

Wait, check that. They sell well – when they’re Mazdas and Hyundais. It’s debatable whether a BMW (or any other lux-brand) hatchback sedan will get the same traction. As mentioned earlier, the 5 GT has been spinning wheels thus far. 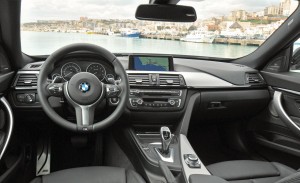 Time will tell as regards the 3 GT.

Personally, I like the way the car looks. It’s not disproportionate or heavy looking – and a sense of lightness and spaciousness is effectively created by the frameless door glass and the comparatively low height of the doors themselves. This car is one of the few new cars that doesn’t make you feel as though you’re sitting low in a bathtub, your eyes just about level with the edge.

BMW worked hard to sex up the car, too. Or at least, de-wagonize it. The back seats, for instance, are not a utilitarian bench but a split deal, with 15 adjustment positions. There is also the usual assortment of M (Motorsports) upgrades, such as high capacity (and contrast color powder-coated) brake calipers, fatty steering wheel and polished/brushed metal trim bits. 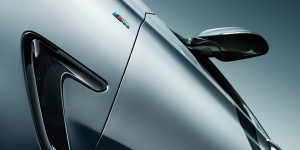 Styling touches specific to this car include functional lower front quarter vents (these duct air out of the wheelwells, improving aerodynamic flow) and the discreet pop-up decklid spoiler that you never see unless the car is moving faster than 40 MPH. 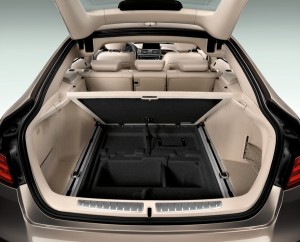 Peripheral plusses include about an inch or so of additional front and second row headroom – and a higher-up/more commanding view of the road.

Which arguably confuses things a bit.

The nominally mid-size 3 Series becomes almost full-sized when hatchback-ized. Theoretically – assuming people like the look – buyers who would otherwise go for a 5 (or 7) on account of the more spacious interior could go down – price-wise – to a 3 GT and get a comparable car for less bucks. The base 5 sedan – less roomy, remember – and in base form, powered by the same 2.0 liter, 240 hp turbocharged four as in the base trim 3 GT – and lacking AWD – starts at almost $50k vs. just over $41k for the much roomier, AWD-equipped 328i GT. And you can get into the 335i GT – with 300 hp six – for about $3,300 less than the base trim/240 hp/RWD 528i sedan.

No doubt, savvy buyers will. 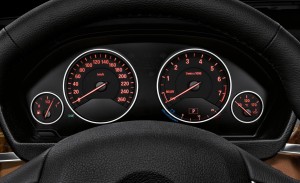 I mentioned the almost-retro feel of the frameless door glass – rare these days – and doors that don’t rise to the level of your shoulders. I also want to mention the equally straightforward main gauge package – a welcome counterpoint to the overteched joystick toggle gear selector. BMW has also simplified the workings of the mouse-input controller for the audio and GPS – located on the center console. User experience-wise, it’s more Mac now than Microsoft – and better than most, in terms of a non-teenager being able to comprehend its function without poring over the owner’s manual.

If I can get in and go, probably, so can you.

There is also a hidden storage area under the cargo floor – with several decent sized cubbies that can be used to stash things like cameras and purses and other stuff you’d like to keep out of sight. 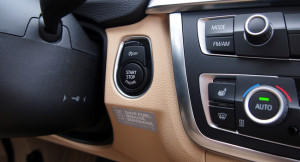 The GT, like all new BMWs, comes with Auto Stop – a fuel-saving gadget that shuts down the engine automatically whenever the car is stationary (as when waiting at a red light) and then restarts it just as automatically when the driver applies pressure to the accelerator pedal. I have dumped on the system in prior reviews of new BMWs because the default setting was always on rather than off unless the driver deliberately engages it. The ’14 GT I tested appeared to have changed that to the way it ought to be: Off – unless the driver turns it on. The only reason for this gimmick is to eke out a literally fractional potential increase in MPGs – important to BMW in terms of its Corporate Average Fuel Efficiency (CAFE) numbers, but largely irrelevant to the individual people who will be buying – and driving – these cars. 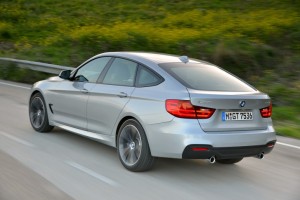 We’ll soon see whether it works for BMW, too.