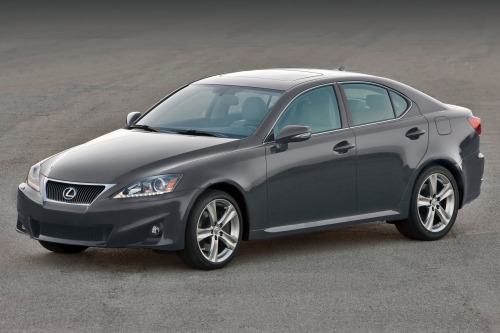 The 2013 Lexus IS (250 and 350) is still for sale as a new model, but the 2014 – heavily updated – is just now becoming available, too. This presents buyers with one of those crossroads moments when they can stick with the old – but still brand-new model – or go with the “new new”  (and very different) model. 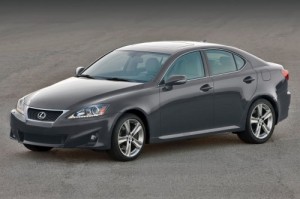 Here are some things to know about both.

The IS series is Lexus smallest luxury-sport sedan. It slots in between the larger – but less sporty – ES350 – and the more expensive GS. 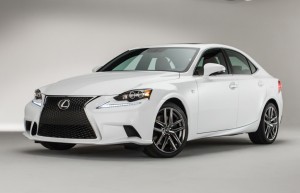 Either version is available in RWD or AWD layouts – but neither with a manual transmission. 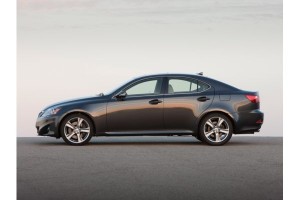 2013 is the final year for the current generation (the second generation) of the Lexus IS series; there are virtually no changes to the car vs. the 2012s.

The ’14 is a larger, roomier car – with revised exterior styling centered around the new Lexus “Cylon Centurion” hourglass grille. However, the drivetrains are mostly carryover, with the ’14 having the same 2.5 liter and 3.5 liter V-6s under its hood. 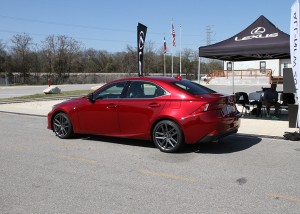 Usually the “all new” version of any given car costs more than the old model. So why the price cut? It’s partially exchange rates – and partially that Lexus is trying to make the ’14 more competitive in its segment vs. models like the all-new Caddy ATS, which starts at just $33,095 – and which can be ordered with a 321 hp V-6 for $41,895. 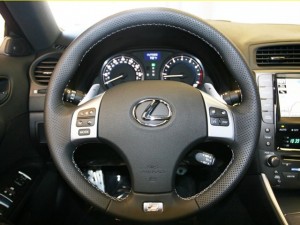 AWD is available with either engine.

If you’re shopping the ’13, probably your local Lexus store will be more ready to cut you a deal in order to make room for the ’14s. 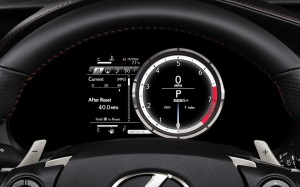 ’13 is a tight fit inside – front seats and back. New-new ’14 has significantly more head and legroom for both front and rear seat passengers, as well as a slightly larger trunk. 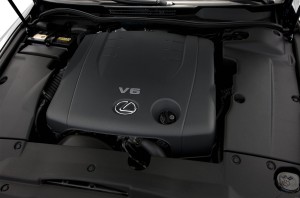 This one’s easy, because both the retiring ’13 and its replacement have the same engine lineup. 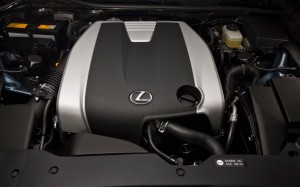 The IS250’s so-so acceleration (it’s adequate for everyday driving) would be unobjectionable – or at least, acceptable – if the car delivered exceptionally good gas mileage. But it does not. The RWD car’s 21 city, 30 highway is actually well  below class leaders like the BMW 3, which not only delivers an EPA rated 24 city, 36 highway (RWD) but also gets the car to 60 in 5.9 seconds – two full seconds sooner than the IS250. 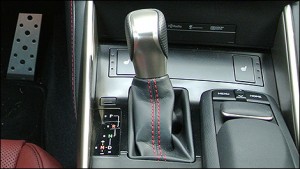 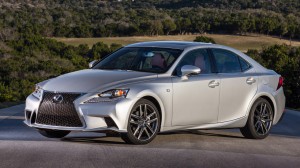 As before, an F-Sport performance enhancement package is available with both the IS250 and the IS350. It is a handling and looks enhancement package – not a horsepower enhancement package. It includes (the ’13) a special 18-inch wheel and tire package, firmer suspension calibrations, front and rear spoilers on the outside – and heated/bolstered F Sport seats. The new-new 2014 also gets a motorized pod instrument cluster inspired by the LFA supercar’s and (V-6 engines) a less-muffled air intake that makes it sound fiercer, though the hp rating remains the same. 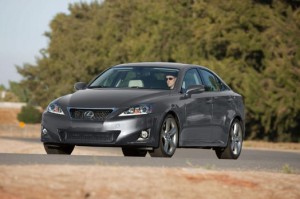 The ’13 IS350 is quick, quiet and smooth – but otherwise unremarkable. There is nothing about its handling or ride or road manners that sets it apart from others in this class because the others in this class are also quick, quiet and smooth. However, some of them offer something more – for example, the six-speed manual gearbox you can get in the BMW 3 and the Caddy ATS (which has the additional allure of a punchy turbocharged engine – or, if that’s insufficient, a brawny 321 hp 3.6 liter V-6).

The IS250, on the other hand, is remarkable for being considerably slower than other cars in this segment. For example, the Audi A4 – though not much more potent on paper (2.0 liters, 211 hp) nonetheless can scoot to 60 in 6.2 seconds. With Quattro AWD. This is nearly two seconds quicker than the FWD IS250 – and more than two seconds quicker than the AWD-equipped IS250. 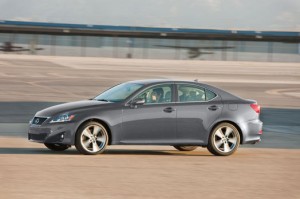 You can also get a six-speed manual transmission in the A4.

Both the Caddy and the Audi – and the BMW, too – have more personality than the Lexus. It’s not that they’re necessarily more competent in terms of their lateral g capability, or their times through a gymkhana course. They’re just more fun to drive, that’s all.

As I drove around in the ’13 IS, I found my mind wandering back to 2001. That year, the first year for the first-generation IS, the IS did have personality. It was fun to drive.

I got one of my most memorable tickets in one, in fact. The car egged me on with its free-revving DOHC in-line six – and six speed manual transmission. Without the safety net of AWD – or the bevvy of electronic interferers that come standard today. It was a much more aggressive car to look at, too – the very first Lexus to come from the factory with clear plastic tail-light covers – just like the hopped-up sport compacts of the time. Power bulge hood, drilled pedals (including a dead pedal to the left of the clutch, as in race cars), a slick “chronometer” gauge package that has been copied since then by numerous others – but which Lexus had first. The pull-up parking brake was – unlike in the current car – tensioned such that you could use it to lock the rear wheels and perform 90 degree bootleg turns (and 180s). Which is how I got that ticket. 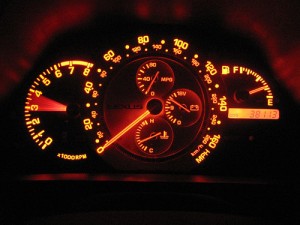 They were expensive – but worth it. I had a blast in that car. I wish I could say the same about this car – the 2013 (and probably also the 2014, given it’s not much different, mechanically).

A manual transmission option; maybe a turbo. More power – or better economy. Something – anything – to give it some memorable or distinctive quality. Some reason to want to buy it rather than a BMW, Cadillac or Audi. 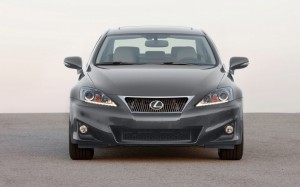 Here we come to the biggest difference between the last of the second generation and the first of the third: Size – and space. 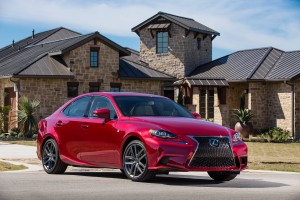 The upsizing of the ’14 IS was no doubt done in response to complaints about the scanty real estate in the ’13 IS. Though it fits more easily into tight parking spots, it is also a tight fit inside. Taller drivers may find their heads rubbing up against the ceiling, as I did – even with the seat lowered down as far it will go. The ’13 IS’s 37.2 inches of noggin space is a pretty close shave. There’s an inch and a half more clearance in the ATS (38.6) and nearly three inches more in the BMW 3 (40.3 inches). 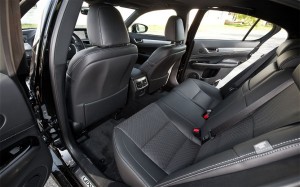 The larger ’14 IS has more passenger-agreeable (and tall driver-friendly) accommodations: 38.2 inches of headroom up front – a full additional inch of clearance – and 32.2 inches of backseat legroom, 1.6 inches more than in the ’13. It’s still tighter than the others, but the gap is closer. I could probably live with the ’14. The ’13 is just too cramped for someone my size. 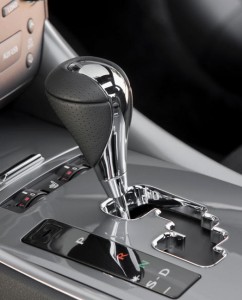 I do like the old-new car’s fuss-free controls. Being an older design, the ’13 lacks such things as “haptic” (pressure sensitive) and iPad-like buttons; there is no mouse – and the gear shifter is straightforward put-it-in-drive-and-go. The ’13 is a car you can drive without having it explained to you first. The ’14, on the other hand, does have a mouse input and what Lexus calls Remote Touch Electronics. You may dig this – or hate this – which will help determine which IS is the IS for you.

As mentioned up above, you will probably find it easier to haggle down the price of a new-but-old ’13, as opposed to the new-new ’14. But perhaps not, given that Lexus chose to leave the ’14’s powertrains largely untouched relative to the outgoing ’13s. Yes, you’d get a new, larger car – and all the latest technology. But is that sufficient warrant to pay new-new car money for an old engine lineup? It’s possible there will be a run on the remaining ’13s – while the ’14s take up floor space. 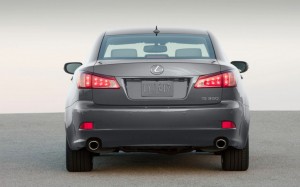 The old-new car would have been so much better with a bit more room – and a bit more personality. The new-new one has the room, but comes up short on the rest.

I still miss the original IS, myself. But that’s neither here nor there today.