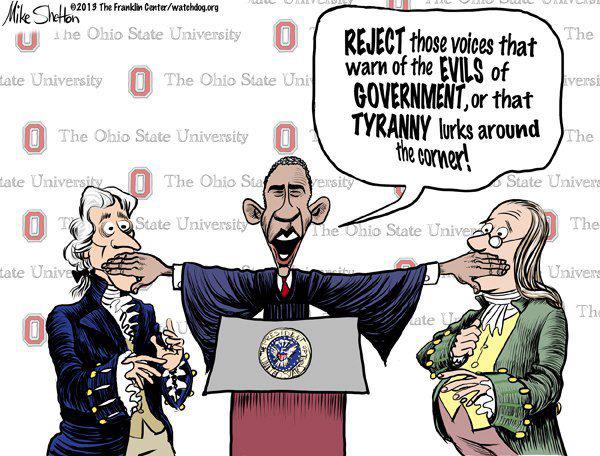 I’ve read that it’s an effective defense tactic to go limp – become deadweight – in the event someone’s trying to force you to go with them. It’s advice directed mainly at women facing the prospect of a kidnapping/sexual assault – the object being to make it harder for the thug to have his way by refusing to assist in your own abduction. 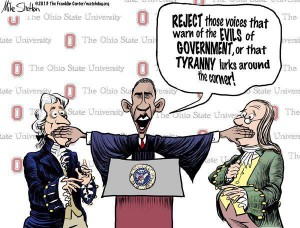 Two things come to mind, one facing some people – the other facing pretty much all people. The first is Connecticut’s (and Colorado’s) attempts to criminalize mere possession by the non-anointed (that’s you and me) of many types of firearms and accessories – such as “high capacity” magazines – on the premise that having a certain type of firearm (or “high capacity” magazine) is the same thing as using it to harm others. Kind of like having a penis means a man is – ipso facto – a rapist. Or that having a vagina must mean the individual is a prostitute. 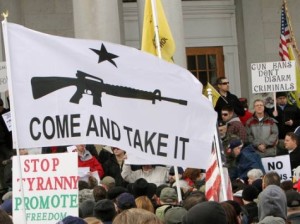 The second thing is, of course, Obamacare – the federal government forcing everyone not already on the dole to hand over their money to an insurance mafiosi. This is a new low – even for Washington. But in a way at least, it’s more direct – more honest. Government has always been about profiting at the expense of others, using violence to achieve those ends. Obamacare makes this explicit. You – and I – are to be held up at gunpoint and made to hand over money for the profit of a private enterprise. To line the pockets – and bloat the salaries – of insurance executives under the pretense of providing “health care.” The fact is, all you’ll be getting in return is an insurance policy – quite a different thing.

If, that is, we play along.

For the first time in a very long time (perhaps not since the 1850s) there is widespread rejection in principle of the government’s actions. People – hundreds of thousands of them in CT and probably at least that many in CO – have already “gone limp” by refusing to play along. They have not turned in their banned firearms and illegal “high capacity” magazines. They have thereby placed the government in a very awkward – perhaps politically untenable position. It will either have to tacitly accept what amounts to a vox populi nullification of the edict.

Or it will attempt to enforce it.

In the case of the latter, it is probable there would be widespread revulsion at the spectacle of SWAT raids on the homes of literally thousands of “law abiding” people. And – much more critically – these “law abiding” Mr. and Mrs. Middle America would finally be disabused of the pleasant fiction that Gestapo tactics are only used against “bad” people (i.e., not their type of people), that only those who “deserve it” ( you know, blacks – and of course, “terrorists”) ever feel the cold fist of the state’s power. At this point, the government has lost the one thing it must have to maintain its power – the appearance, at least, of consent. It can still maintain its power by the naked  exercise of force – but once that it is out in the open, the naked exercise of force is all it has left.  No more flag-waving, pin-wearing land-of-the-free 4th of July we’re the exceptional nation flapdoodle. The people will know. And once they do, the jig is up.

Or will be, in short order.

In the case of the former – tacit acceptance of the people’s nullification by widespread civil disobedience – the government also loses. The fiction of its unassailable authority is collapsed. If it can be disobeyed once without consequences, then why not disobey it again? Why obey it at all?

It becomes a toothless tiger.

Obamacare presents us with an even greater opportunity – because of the far more widespread rejection of being forced to hand over money to private, for-profit cartels. In every state, in every poll, there is majority antipathy toward Obamacare. Millions have already expressed their intention to not play along – to go limp – by not signing up. 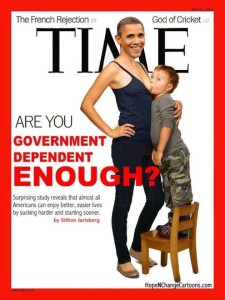 The federal government faces the same lose-lose choice faced by the state governments of CT and CO. It can either accept what amounts to an informal public referendum on Obamacare and the implicit rejection of the government’s right to impose such a thing on people – and all that will inevitably follow from that. Or it can attempt to enforce its law. Which will entail (at first) confiscating people’s money and (if that’s insufficient) their property – and ultimately, threatening them with prison for failing to comply. In which case, once again, the public will be quickly disabused of any lingering notion about “consent of the governed” and “democracy.” They will know they live in a thugocracy – and henceforth will only obey if forced. Openly forced. No more  pretense, no more Happy Talk – no more illusions.

Because in the long run, societies openly held together at bayonet-point do not endure. Slaves – prisoners – are not productive. They do what they must, no more. Even the old Soviet Union was dynamic only so long as the people actually did believe the government was benevolent. That “good people” had no reason to worry.

Stalin showed them otherwise – and it held together, for awhile. Because Stalin was a rarity (thank god) even among sociopaths.

Most of them (sociopaths) are more like Obama – or his predecessors.They can be beaten because they themselves shy away from going all out – from mass murder. They countenance “wet work,” certainly – but prefer not to do it themselves, and perhaps like to pretend to themselves that it’s not done at all. They rarely have the stomach to see it done on a mass scale.

Prosecuting a lone tax protestor is easy enough. He has few friends – and little sympathy. 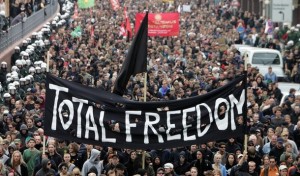 But when the government goes after large groups of people heretofore “law abiding” – and regarding themselves and others as “good people” – then the game is afoot.

We can do our part by forcing the government to choose from either of two equally dangerous (to its  legitimacy and thus, its power) alternatives.

All we have to do is go limp – and not play along.