A weird thing happened to me recently during a traffic stop. The cop demanded the usual stuff – license, registration. But then he demanded one more thing – my Social Security number.

Under duress,  I gave it to him.

Maybe you remember when Social Security numbers were “not to be used for purposes of identification.” It actually said so, right there on the card.

So much for that. As usual, per the frog in the ever-warming pot of water, we do not notice the change until it is too late to change anything.

Our SS number is now the de facto – and in a very real sense, the de jure – national ID. De facto, because it’s almost impossible to transact any business without one. De jure, because the law increasingly does require it for purposes of identification, even though the original law said it never would be used for such purposes.

But why be worried (as opposed to merely irritated) about being forced to cough up one’s Social Security number over a routine traffic stop?

First, there’s very real potential for identity theft – possibly, by the cop who issued you the ticket … or perhaps a quasi-cop (i.e., a clerk) down at the cop shop who has access to the paperwork. These people may or may not be trustworthy, but we know for certain the government is an epicenter of untrustworthiness. Of incompetence. Especially when it comes to the handling of information that might cause problems if it falls into the wrong hands. This point need not be elaborated any further than it is necessary to belabor the dangers of walking down a slippery sidewalk. 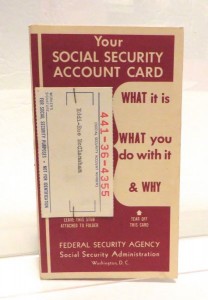 Keep in mind that since your Social Security number is, in fact, used for purposes of identification – and much more, besides (including credit history) its leakage could cause you problems you don’t even want to know about. And now, it’s written on the back of a traffic ticket that’s probably accessible to scores of potential no-good-niks down at the cop shop.

The other problem relates to the government’s money-lust.

They want your sosh because it’ll be easier to sic debt collectors on you in the event you welsh on what you “owe.” Apparently, there are crafty devils out there with fake licenses who used to “get away” with not handing over the money the government thinks it’s entitled to just snatch from you. But it’s harder to pass off a fake Social Security number – and it’s also much easier to get you to pay up. Even those who do not fear the DMV and its points – or the insurance mafia – will usually cringe when contemplating the prospect of a black mark showing up on their credit report.

The SSN number makes it almost impossible to evade Uncle. And that is precisely the point, from their point-of-view.

Now, technically, the cops are only entitled to ask for your Social Security number – and you are not necessarily obliged to give it. 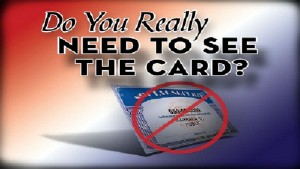 There is something called the Privacy Act of 1974 which reads as follows:

“It shall be unlawful for any Federal, State or local government agency to deny to any individual any right, benefit, or privilege provided by law because of such individual’s refusal to disclose his social security account number.”  Sec. 7(a)(1).

It sounds reassuring – like the Fourth Amendment’s gabble about no “unreasonable” searches absent “probable cause.” Technically, this is the law. Operationally, you are going to be stopped for no particular reason (e.g., “safety/sobriety checkpoints”) and if you don’t consent to being searched, they’ll find some pretext for doing so (e.g., a dog “alerts” on you/your car)  or at the very least, hassle you to the point that you give in.

Technically, you have the right to demand the cop identify the specific law that requires you to provide your Social Security number – and then to specify how, exactly, your Social Security number will be used. The cop will probably not be able to do either. Instead he will cite “the law” (generally) and now the fun begins. In most contests between an armed man and an unarmed victim, the armed man typically emerges the victor. 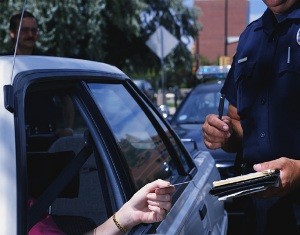 First, you’re under duress (a concept Clovers do not grok).

Most people are rightly nervous when dealing with an armed goon. Arguing with him over what “the law” is will have the same effect on the cop that making funny faces at an ape behind bars usually does.

Only the “ape” in this case is not behind bars.

If you decline to provide your SSN, the odds are very good that – minimally – you will be “detained” until such time as they can “confirm by some other method” (got that from the horse’s mouth) that you are really you – which is what they will usually claim they need the SSN for.

In other words, the SSN is now officially being used for purposes of identification – just as they (the authors of Social Security, all those years ago) swore up and down it never would be. It was only going to be a government social insurance program, to keep old folks from shivering and starving in the winter. Never to be the basis for a nationwide cattle-cataloging system.