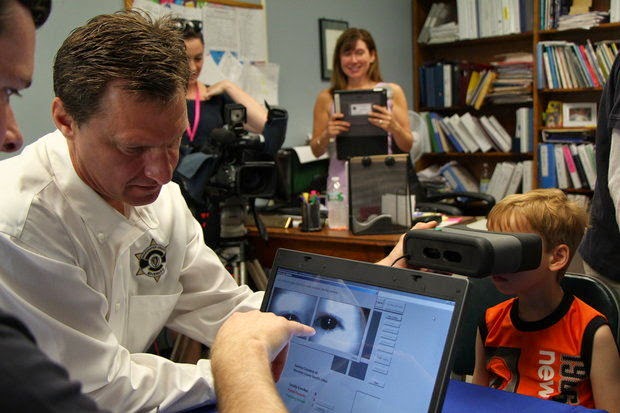 Worcester, MA – It takes less than a minute to enter a child’s information into a national missing person’s database. All it takes is a photo, some general information like height and weight, and a quick scan of your eyes.

“The eyes don’t lie,” said Lewis Evangelidis, the Worcester City sheriff. “The eyes are the identification.”

The department has been using the iris scanning program for years among the county’s seniors where thousands of adults with Alzheimer’s or dementia have been scanned. The program has been used among children at fairs and community events, but for the first time the sheriff brought the program to a Worcester public school. The program is free to those who sign up and can be used to quickly identify children who are either lost or may have been abducted.

“We try to see in what ways we can improve the safety for the community and this seemed like a no-brainer. We have the technology and have been using it for seniors and why not extend it to children,” said Evangelidis who has joined 1,300 other sheriff’s departments implementing this technology with children. “In the end, it’s another tool for public safety.”

The Child Project national registry is maintained by the National Center For Missing & Exploited Children, a non-profit based in Phoenix. Once digital photos of the children’s eyes are made, the data is analyzed and a 688 byte code is created and put into the database. Any law enforcement agency with the proper equipment – which is now prevalent, according to Evangelidis – can easily scan a child’s eyes and get an identification along with contact information for the child’s parents.

What’s the common denominator for spying on us? Money! See below:

In 2012 The National Center For Missing & Exploited Children made over $48 Million Dollars!

Remember non-profits make millions of dollars it’s all about profits.

The process requires children to have two pictures taken, one of their eyes and one regular digital photo for identification purposes. Parents must sign off on the program, according to the sheriff’s department, and the iris information is erased from the system once the child turns 18.

The camera captures an up-close look at the iris, which is the colored part of the eye.

The sheriff says the iris is ten times more identifiable than a fingerprint. It’s the one part of the body that will never change.

“Fingerprints wear out, fingerprints can be compromised. Your iris cannot be,” he explained.

The Center For Missing Kids also has a fingerprinting program.

Sheriff Evangelidis has been using the program with senior citizens for years. Wednesday was the first time it’s been brought to a public school.

Close to 500 Nelson Place School students lined up to get their picture taken. The students are days away from summer vacation. The sheriff says it’s a perfect time to get their information in the system.

“This iris scan is a national database, so if you travel in the summer and something was to happen, you’d be part of that database in any local law enforcement no matter where you were,” Evangelidis explained.

Evangelidis also uses iris scans at the Worcester County House of Corrections to identify inmates.  He calls the technology the next generation of identification, but says it shouldn’t replace traditional child ID kits that use fingerprints.

“You know it’s always good if you’ve got the potential to have a safety kit with fingerprinting. I’d recommend that too,” he said.

Company Behind Shooting Targets of Children Received $2 Million From DHS