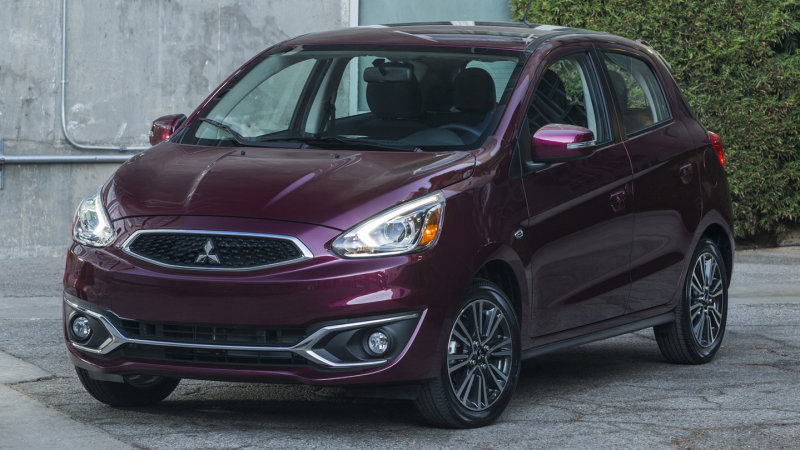 The 2017 Mitsubishi Mirage costs no more than the 2014 Mirage – despite a horsepower infusion (not that it’s a lot, but still) excellent fuel economy (preliminary estimates are 44 maybe even 45 MPG on the highway) and a major wheels-up re-bop of the body/cosmetics/features (the latter of which now includes an available 300 watt audio rig, heated seats, LCD touchscreen and LED/HID lights, even). 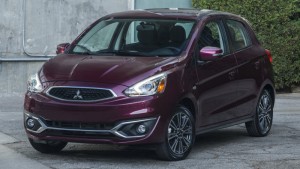 For the money – and otherwise – it’s untouchable.

The Mirage hatchback sedan is Mitsubishi’s littlest/least-expensive car and  – other than the Nissan Versa sedan – it’s the least expensive new car on the market.

$12,995 for the ES trim (topping out at $16,495 for the sporty-ish GT version) and that’s with AC and a decent (140 watt) four-speaker stereo system, power windows and locks (the latter two features cost extra with the Nissan).

The $11,990 Versa sedan (more on that in a minute) is stronger – it has a 1.6 liter four cylinder engine vs. the Mitsu’s 1.2 liter three cylinder engine – but it’s less fuel-efficient. 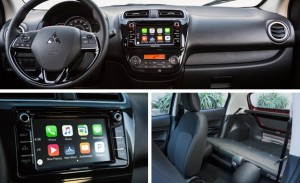 It’s also a sedan – and that means it has a trunk rather than a liftgate. It also means just 14.9 cubic feet of trunk space… vs. 47 cubic feet for the hatchback Mirage. You can buy a hatchback version of the Versa – which ups the Nissan’s cargo capacity to 38.3 cubic feet.

However, the biggest difference between the two is that Nissan’s not desperate while Mitsubishi is. Not because its cars are bad, but because Mitsu really screwed the poodle a few years back with a “Zero down, Zero interest and Zero payments for a year” program that was designed to move cars off the lot (it did) but also resulted in most of them coming back (repo’d) a year later, thrashed. This killed the resale value of Mitsubishi cars generally and that plus being a small company and generally Bad Times for the car industry have left Mitsu badly gimped and desperate for your dollars. 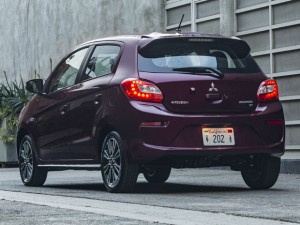 The Mirage’s three cylinder engine has been tweaked to produce a bit more power while the car’s curb weight has been reduced to less than 2,000 pounds – vs. almost 2,400 pounds for the Versa sedan.

It’s still not exactly quick – but no longer unacceptably slow. 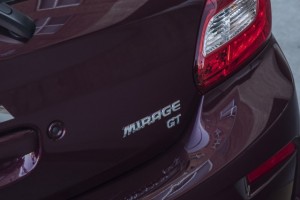 There’s also revised exterior styling and an updated interior as well as a slew of new, un-econocar options – such as the previously mentioned 300 watt premium stereo system, seat heaters and apps such as Android Auto and Apple Car Play. These are examples of “nice” items not available in the Motel 6-ish Versa.

A nice new car for the price of a used car. 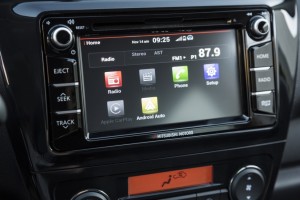 Likely hideous depreciation (see point above) but, this is a non-issue if you plan to keep it until the floorpans rust through.

Which probably won’t happen for 20 years at least.

Like several other small cars (e.g., the current Ford Fiesta and Mini Cooper) the Mirage is powered by a three cylinder engine.

Unlike them, it isn’t turbocharged.

This has its upsides and its downsides.

On the upside: The 1.2 liter engine is by dint of not being turbocharged a simpler engine. Fewer parts, less to go wrong.

It’s also not under pressure – literally. 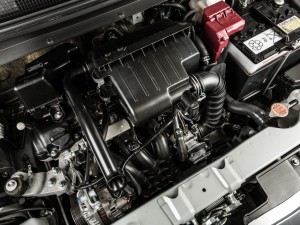 Turbochargers make an engine more powerful by force-feeding it air. Instead of the engine just sucking it in, it is compressed (positive air pressure) and the pressurized air is stuffed into the cylinders rather than being inhaled (negative air pressure) as it is in a “naturally aspirated” (non-turbo or supercharged) engine.

This is why turbocharging is measured in pounds of boost.

But the increased pressure increases internal stresses. An engine can be (and ought to be) built with special heavy duty parts to deal with it, but the fact remains: The engine is under pressure and that often leads to a shorter (and more expensive) life.

No such worries here.

Your worry is power/performance – which you don’t get much of.

Meanwhile – as an example of what turbocharging can do – the smaller (1.0 liter) three cylinder “EcoBoost” engine in the Ford Fiesta conjures up 123 hp and 125 ft.-lbs. of torque.

But then, nothing’s free in life.

But it’s not more economical: 31 city, 43 highway – which is good – but not quite as good as the previous (2015) Mirage’s 37 city, 44 highway. And the new Mirage has been lightened up and the engine tweaked, so the ’17’s numbers ought to be better. Especially because it’s lighter. The Mirage is one of the few cars – new cars – that comes in under 2,000 pounds.

A five-speed manual transmission is standard – with the option of going with a continuously variable (CVT) automatic. 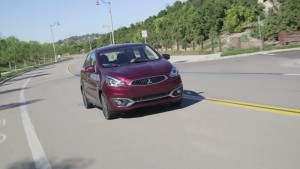 When I last wrote about the Mirage back in 2014 (see here) I compared it with the Geo Metro of the ’90s – which also had a three cylinder engine (no turbo) and delivered about the same gas mileage in a similarly low-bucks (and small-sized) package.

Looking back, this was unfair … to the Mirage.

Its acceleration – compared with that of the Metro – is… well, maybe speedy isn’t the right word.

The updated ’17 Mirage is at least three seconds quicker. 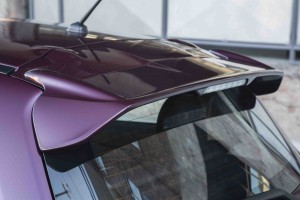 That’s about as quick as a new Prius C hybrid – which isn’t exactly speedy, either. But it’s speed enough to keep up with traffic – especially in view of the depressing fact that all those potentially actually speedy cars out there tend to accelerate glacially – not because they haven’t got the power, but because the people driving them are addled by gadgets or cowed by fear of The Man. Almost no one actually drives fast anymore – no matter what they’re driving.

If you’re like me and actually notice that the light’s gone green – you’ll be fine because you’ll get The Drop on these half-asleep/gadget-addled drones every time.

Stick with the stick, though.

The little three does not do well when paired with the CVT automatic. It’s noticeably slower (even though slightly more fuel efficient) and not nearly as much fun. But, if most of your driving will be in-city (stop and go, mostly low-speed) the CVT may be the better choice.

Mitsu has increased the diameter of the Mirage’s brakes – discs up front and drums in back – which is actually good if the object is durability and low-cost. Drum brakes are hard to hurt, unlike disc brake rotors and calipers. And cheap to replace, if that ever becomes necessary. 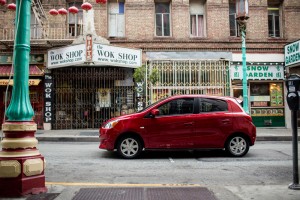 The suspension system is also simple (strut-type up front, torsion beam in the rear). It’s  just the ticket for an inexpensive to buy – and inexpensive to maintain – car. In keeping with that ideal, the Mirage also comes with sensible shoe 14 or 15 inch wheels (both aluminum, which keeps the weight down) rather than the stupid (because heavy/expensive/increase rolling resistance and so kill fuel economy) gnomesayin’ 16 and 17 and even 18 inch ree-uhms that have become typical fare even on economy cars.

The Mitsu’s wheels are sensible because they do not impart excess rolling resistance and tires for such wheels are cheap.

Which  is what you want … right?

You may have read reviews of the previous Mirage insulting it for its less-than-Porsche 911 handling. This is like slamming a 911 for not giving you 44 MPG. I will repeat what I have been trying to get across the transom for years now: Any new car (including the Mirage) handles better than most people are capable of driving. Or willing to drive. This doesn’t mean most people are poor drivers. It means most people do not drive at speeds sufficiently high such that they approach the limits of the car’s capabilities – or their own – particularly in the curves. 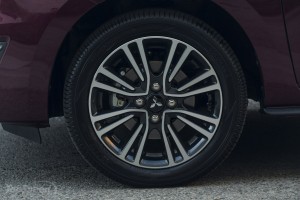 If you, like most people, do not operate at speeds at least 20 MPH above the posted limit in the curves – your foot on the gas rather than the brakes – you will have no complaints to register about such things as body roll or tires beginning to lose their grip, much less understeer slide or oversteer drift. It’s 2016 (and this is a 2017) not 1969, when most cars had truck-type suspensions and shitty tires that would squeal (and send hubcaps flying) if the car was driven 5 MPH above the posted limit in a curve.

The Mirage is a little winded on the highway – but so is the not-so-Smart car (which costs thousands more) and so are many other little cars (Prius C).

It gets the job done. What else is there? 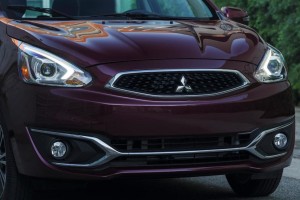 There’s nothing hateful or embarrassing about the Mirage’s looks.

Arguably, it looks pretty upscale compared with some other cars you might shop in this general class, such as the no-frills Versa or the Scion (RIP) iA (soon to be resold under the Toyota label as the iM) or the Chevy Sonic and Hyundai Accent… all of which cost thousands more, don’t forget.

The Mirage has upscale touches such as LED/HID lights, “beveled” fog lights (SE and GT trims), piano black trim plates and a leather-wrapped steering wheel. It can be outfitted with a 300 watt Rockford Fosgate audio rig, heated seats and climate control AC, too. See what it costs you to get stuff like that in a Honda or a Toyota or even a Hyundai.

It is a small car, though – even relative to other small cars. 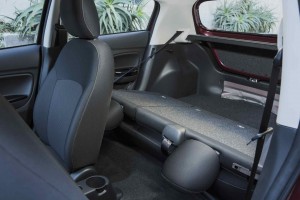 But room inside is actually better-than-you’d expect. There’s 41.7 inches of legroom up front (almost exactly the same as the much larger-on-the-outside Versa sedan, which has 41.8 inches up front) and while the Mirage’s 34 inches of backseat legroom is less than the Versa’s (37 inches) it’s significantly more than the Ford Fiesta’s 31.2 inches of legroom in its second row.

The Ford Fiesta sedan has 31.7 inches; the Fiesta hatchback a bit more (37.2). Worth a mention here is that the arguably more desirable hatchback body costs extra at the Ford store ($14,880 vs. $14,580) while the Mitsubishi doesn’t charge extra for the hatchback bodystyle (the only Mirage bodystyle).

So why is the hatchback more desirable? You get more headroom in the second row because of the taller roofline and much more usable/versatile cargo space with a rear liftgate vs. a trunk. 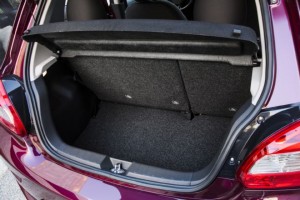 For example, the Mirage has 17.2 cubic feet of cargo capacity behind its second row – vs. 12.8 for the Fiesta sedan (14.9 for the larger-on-the-outside Versa sedan) and 47 cubic feet if you fold the second row flat. That latter figure, by the way, is very close to the room inside the Honda Fit (52.7 cubic feet; best in class) but – again – the Fit’s higher MSRP ($15,890 to start, with much less likelihood of haggling that down appreciably) must be taken into account

I bitch constantly about new cars costing too much (they do) and being larded up (literally, they’re almost all grossly overweight) with Too Much Stuff. 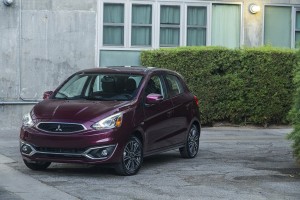 When you take into account the eagerness with which you (and your checkbook) are likely to be greeted at the Mitsubishi store, to say this car is worth a look at least is probably the understatement of the year.

Seize the day – because cars like this are going away faster than the presidential prospects of Jeb!