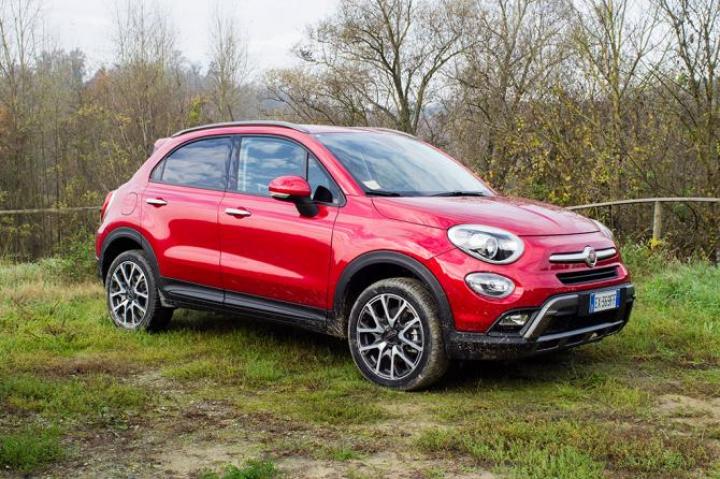 You know what “Fiat” stands for, right? 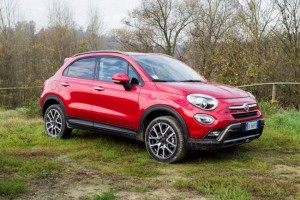 Well, they keep on trying.

Maybe a Jeep will do. 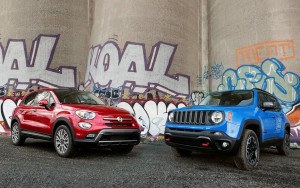 It’s the Italian cousin of the Renegade, one of the first jointly-designed products of the Fiat-Chrysler-Jeep merger.

The idea seems sound. If the Jeep version sells, maybe the Fiat version will, too.

Maybe it’s the Fix that “Tony” has been looking for. 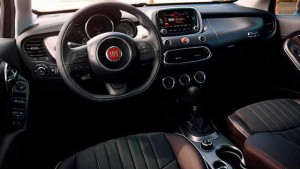 The 500X is a compact crossover SUV, a notch smaller than something like a Honda CR-V (and about the same size as an HR-V).

It’s related to the Jeep Renegade – Jeep being owned by Chrysler (and Chrysler now owned by Fiat) and shares engines (and transmissions) and offers AWD – but doesn’t have the Jeep’s additional off-road capability.

It emphasizes style and on-street performance instead. 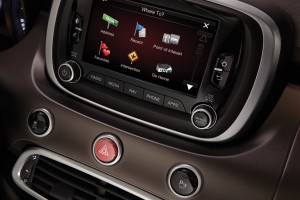 All other trims – Trekking and Lounge – come standard with a larger (not turbocharged) 2.4 liter engine paired with a nine-speed automatic. But you can choose FWD or AWD with either trim.

Prices top out at $27,035 for an AWD-equipped Lounge, which comes standard with all the equipment included with Trekking trims (17-inch wheels in place of the base Pop’s 16s, an upgraded LCD display, driver-selectable modes for the automatic transmission, foglights) plus an upgraded eight-speaker audio rig and the option to buy things like a full-length panorama glass roof, mocha-java leather seat covers and a nine speaker premium Beats audio system.

Though closely related to its American cousin, the Jeep Renegade, the 500X is most similar in looks and layout to the Mini Clubman ($24,100-$27,650), which also offers sporty powertrains as well as your choice of FWD or AWD.

Sad news. The high-performance Abarth version of the 500x that was on deck no longer is. It may be resurrected sometime next year (calendar year 2017) as a 2018 model.

The  Easy and Trekking plus trims have been dropped, too.

Available with either of two engines – most rivals come with just one – and the 500 X’s optional 2.4 liter engine is the strongest one (180 hp) you can get in the $22k-$25k-ish price range, with the exception of the 500 X’s rebadged brother, the Jeep Renegade). 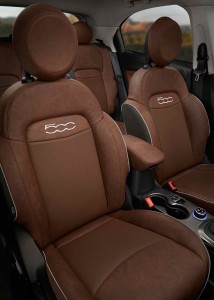 Available with a manual transmission (other small/sporty crossovers like the Mazda CX-3 and Chevy Trax are automatic-only).

Manual only offered with the 1.4 liter engine – which is only available in the base Pop trim/FWD version of this vehicle.

Nine-speed automatic (mandatory with the 2.4 liter engine) sometimes seems confused about which gear to be in. 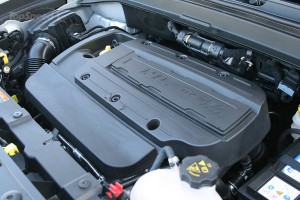 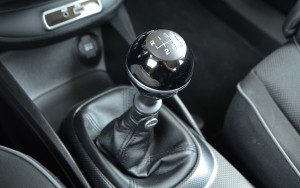 You can also get a manual (six-speed) transmission in the Fiat – a rare feature in the class and small crossovers, generally.

Unfortunately, Fiat only offers the manual gearbox with the base 1.4 engine – and that engine is only available in the base Pop trim, and only with front-wheel-drive.

All other versions of the 500X come with the larger 2.4 liter engine; it makes 180 hp – but  you have to accept a nine-speed automatic transmission as part of the deal. It has some issues (more on this below). 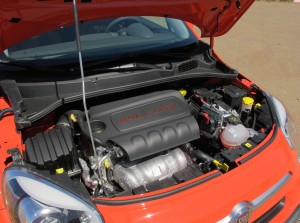 However, the Fiat’s gas mileage is lower than rivals when the car is equipped with the 2.4 liter engine.

The 1.4 engine’s mileage is good – 25 city, 34 highway – however (and weirdly) this engine requires premium unleaded fuel.

Remember that bit about 22 pounds of turbo boost?

The X’s rivals – including the Chevy Trax, which is turbo’d, too – all take regular. As they probably ought to, given these are budget-minded vehicles. 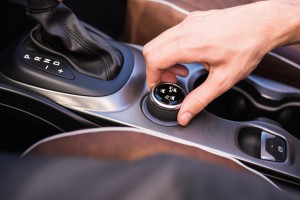 The nine-speed automatic has sport/manual modes and there are three driver-selectable settings (Normal, Rain/Snow and Sport) for the optional AWD system.

Unlike the Jeep Renegade’s more off-road capable system. the Fiat’s is an on-road/street-driving-intended set-up, like the available AWD systems in rivals like the HR-V, Trax and CX-3.

The Fiat – showing its Jeep kinship –  does have more ground clearance than its rivals: 7.9 inches with all-wheel-drive (about an inch less with FWD) vs. 6.1 inches for the CX-3, 6.7 inches for the Honda HR-V and 6.2 inches for the Chevy Trax. This should help get you through on snow days – but if you’re looking for more in the way of off-pavement capability, you might want to take a look at the Renegade. It’s the only subcompact crossover currently available with a Low range gearing feature as well as off-road terrain settings (sand/gravel/mud, etc.). 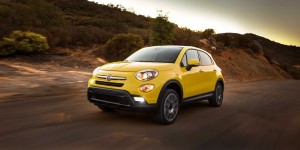 The 500 hatchback is highway-capable but being tall and short and light is not ideal for dealing with the slipstream of passing Kenworths. The 500 X is much better suited for such duty while still being small enough to be easier to maneuver in urban/suburban areas than the typical car.

Arguably it is slightly better in that role than its rivals – by dint of being slightly smaller-on-the-outside than all of them except the Trax (which is exactly the same overall length, 167.2 inches).

The Honda HR-V, for instance, is a couple inches longer overall (169.1 inches) so it’s that much less able to slot into and out of tight curbside parking spaces downtown. It also has a noticeably wider turning circle – 37.4 feet vs. 36.3 for the Fiat. 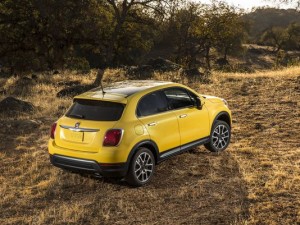 The Mazda beats them both, though – with the tightest turning circle in the class (34.8 feet).

Both of the Fiat’s engines have good power – and deliver class-competitive acceleration.

The standard 1.4 engine’s 184 ft.-lbs. of torque is especially noteworthy because it provides the low-RPM torque that’s absent in rivals – or rather, which you have to work their engines harder to access. The Fiat’s torque output is not only greater, it arrives much sooner – at just 2,500 RPM. 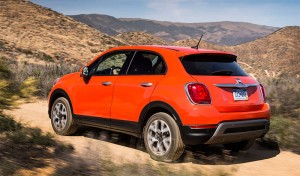 Like the Fiat, the Chevy’s turbocharged – and the turbo boost is what accounts for the healthy torque numbers. However, the Chevy manages those numbers on regular gas – while the Fiat must have premium to deliver them.

That’s odd, given the 1.4 engine is the economy engine in the lineup.

Meanwhile, the optional 2.4 liter engine – the performance engine – is set up to operate best on regular. 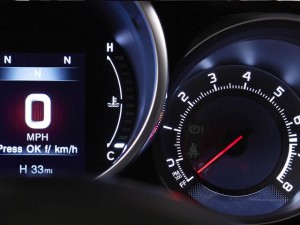 In actuality, the nine-speeded Fiat’s numbers are not as good as rivals’ numbers, despite those rivals having transmissions with only six gears.

Or no gears at all – if they have a CVT.

Part of the reason for this, of course, is that the 500X has more engine and that necessarily entails a bigger appetite. It’s also heavier than its rivals, two of which (the Trax and the CX-3) weigh just over 2,800 lbs. or about the same as the much smaller 500 hatchback.

But the downside of all those gears is a fairly busy transmission that’s been programmed to seek out those higher gears as soon as possible, in order to to eke out the MPGs. That means lots of transitions because of the distance (ratio-wise) between say 4th or fifth and eighth or ninth.

The Fiat’s box might need to drop down three or more. 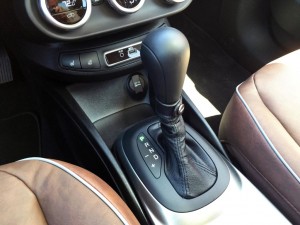 Unfortunately, government fuel-efficiency mandates rather than buyer/market demand are driving such extreme solutions as nine (and soon ten) speed automatics with multiple overdrive gears on top.

But Fiat can’t – because of the pressure coming from the government.

Which is why you can’t get a manual with the bigger engine. 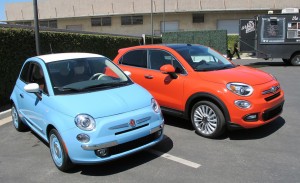 Like the Mini Clubman, the 500 X is a cheerful-looking thing. Even the seatbelt buzzer has a happy sound.

The interior, likewise, features body-colored trim plates, available ambient mood lighting and you can order up various packages to individualize your ride.

The Trekking trim sounds rugged, but don’t be fooled. A Jeep in Fiat drag it may be, but it’s more looks than goods. You’ll get a different front clip, fog lights and an 18-inch wheel/tire package – but no skid plates or Low range gearing.

Head to your Jeep store for those things. 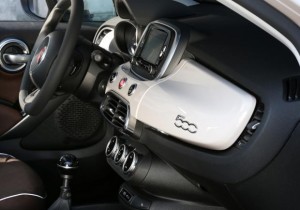 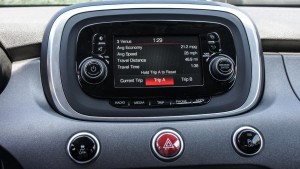 The often-insulted Chevy Trax ( I like the thing) does well on both counts, with 35.7 inches of second row legroom and a very impressive 48.4 cubic feet of total cargo capacity (nearly as much as the Honda HR-V). 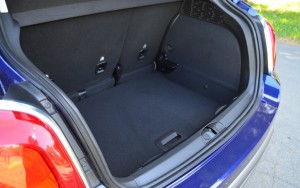 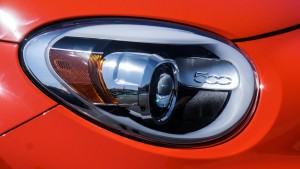 Fiat is a relative newcomer (a return comer, actually) to the U.S. market and maybe should have priced this model more aggressively.

On the other hand, it’s a pretty sweet deal compared with the Mini Clubman – which starts at $24,100. 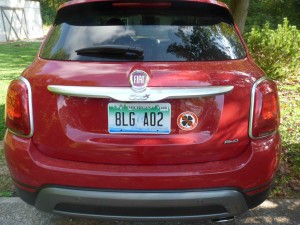 The chief worry here is the future of Fiat – which looks iffy.

If Fiat bails and heads back to Europe, it won’t mean problems getting parts or service but it will probably mean that resale values take a dive. That’s the usual course of events with orphaned cars.

The fact that Fiat decided not to offer an Abarth version (at least, not here – and not now) is kind of ominous, too. It suggests a pulling back.

Hopefully it’s not too little … and too late.