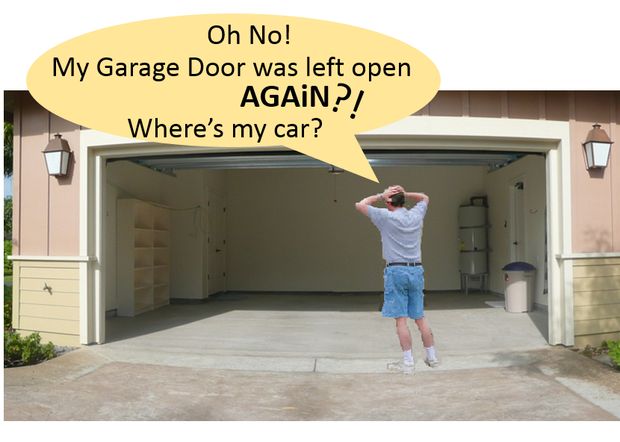 Drive around almost any neighborhood and you will find homes with wide-open garages, expensive tools and equipment in plain sight . . . and no one around.

Tools are portable. Often, they come in their very own carrying case – with a handle and everything.

Anything on wheels – like a generator or air compressor – rolls.

A bold thief could just walk right up in broad daylight, grab your expensive set of Snap-On sockets or your digital torque wrenches and say sayonara. Maybe a neighbor will notice but probably not. If the guy acts like he’s supposed to be there, most people assume it’s ok for him to be there. 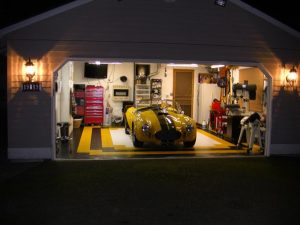 Garages are goldmines – full of easy-to-steal stuff that’s even easier to turn into money via the local pawn shop or Craigs List.

In addition to being susceptible to the random snatch and grab artist, an open garage with everything you’ve got on display is an invitation to the more serious thief who makes plans and comes back later.

Either way, it’s a good idea to not advertise what you’ve got. Keep the door closed unless it needs to be open.

Anything easily portable – like tools – should be stored in heavy chests and other such that aren’t easy to just grab and go.

And that can be locked, too.

Even better, bolted to the wall – or floor.

Classic cars generally don’t have anti-theft systems, unless you’ve installed them; they are also ridiculously easy to hot wire.

It’s not a bad idea to install some kind of disabling system, even if it’s something simple like removing the coil wire and keeping it hidden someplace no one knows about except you. It’s not likely a thief will have the right coil wire to start up your vintage car. 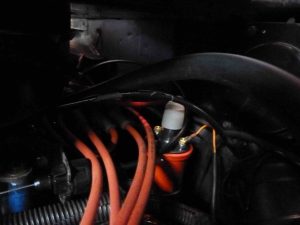 A friend of mine – who lives in a not-great neighborhood – sank eye bolts into the concrete floor of his garage and uses them to chain the axle of his antique car to the floor. Chains can be cut, but it takes time and the harder you make it to steal something, the less likely it is to be stolen.

If you have motorcycles, remember that they can be quickly rolled (or carried) onto a waiting trailer or into the bed of a pick-up, to be hacked up later at the thief’s convenience.

It’s smart to lock the steering head to the left and then take the keys out and put them somewhere else. It’s much harder to roll a bike with its front wheel locked up this way.

It is also a really good idea to secure the barn doors.

It’s often the case that thieves don’t have to break into anything. They just heave the garage door up or walk in the side door. 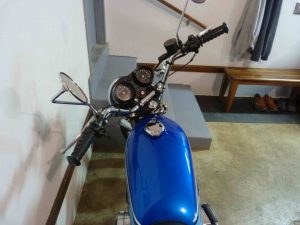 Electric garage doors are fairly simple to break open – and to hack, too. Which is why it’s smart policy to use a secondary means of securing the door. An easy and cheap way to do this is to drill a hole in one of the tracks on either side of the door, the ones that the roller wheels ride in as the door goes up and down. Drill a hole the diameter of a common Master combination lock (or similar). When you’re going to be away, slip the lock in place. That door isn’t going up – even with a crowbar.

Many garages have a side door with a large glass window. This is pretty . . . and also pretty stupid. The glass is easily smashed and if it’s a large enough opening, the thief can just shimmy through the hole (or reach in and undo the dead bolt). It’s almost pointless to even bother with a lock at all.

A solid side door is the ticket. Or one with a small window – too small for anyone to climb through – mounted up high, too high for anyone’s arm to reach down to the locks. 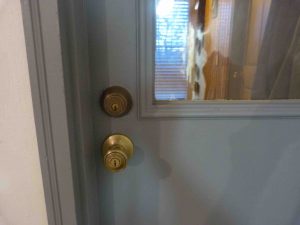 If you have an outside electric keypad opener, don’t use an obvious code (e.g., 1234) or tell too many people what the code is.

Mark expensive tools/equipment with a punch, Dremel tool or some such in a not-visible/hard to access place so that if your stuff is stolen and turns up later at a pawn store, you’ll be able to prove it is yours.

A bright exterior light – motion triggered – is a good thing. An even better thing (cheap, too) is a closed-circuit camera system, obviously sited so that a thief can see he will be recorded if he proceeds.

Plus another that’s not obvious. 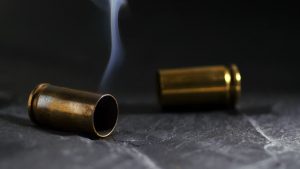 Camera feeds can be piped right to your sail fawn, too.

I like to sprinkle some spent .45 brass near the garage door, out on the cement pad. Near the exterior windows. It sends a certain message… .

Finally, find out whether your homeowner’s policy covers your tools and equipment. It’s a not-bad idea to inventory everything – with pictures or video for back-up in the event you need to verify a claim.

Seatbelt Laws Can Be Deadly