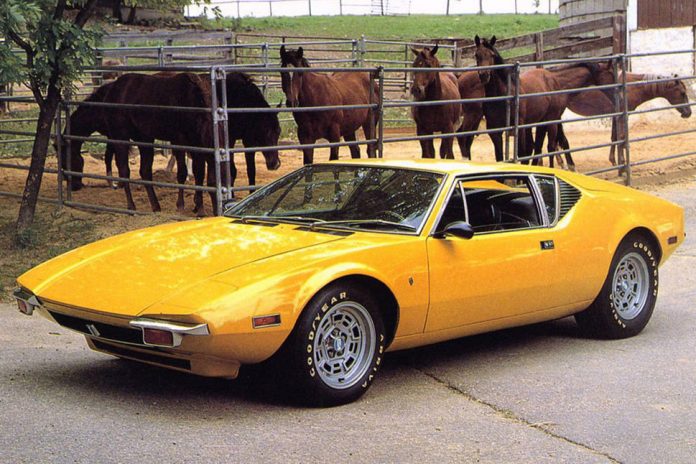 But they made them all the way into the early Clinton years. Not many. But as late as ’93, you could still buy a brand-new Pantera – the very limited-run Pantera SI. Only about 40 examples were made.

They were the last of the line.

The car conceived by Argentinian race car driver turned exotic car maker Alessandro de Tomaso had survived almost long enough to see the repeal of the hated 55 MPH speed limit it was born to violate like your 17-year-old daughter backstage after a Led Zep concert.

Twenty-three years is a long production run for any car, but for an exotic car, it’s almost unheard of. Mostly because in order to remain exotic – and justify its exotic price –  an exotic car must be frequently updated to take account of what’s catching up in the rear-view.

Exotic cars have the shelf life of exotic models. A couple of years, maybe and then it’s What’s New? 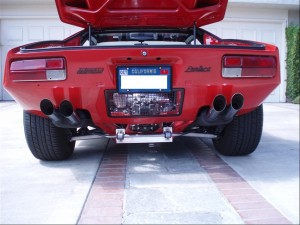 So why did the Pantera survived as long as it did without major changes?

It wasn’t because it was the quickest/fastest thing on the road- even though it looked it.

As much as speed mattered, it was the Pantera’s shock value – and its accessibility – that enabled it to win hearts and minds for decades, and to ascend to automotive iconhood. 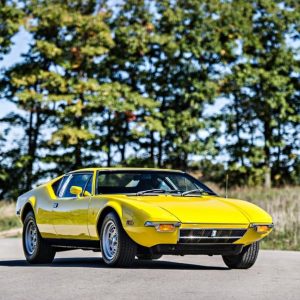 Few things on four wheels have ever approached the curb appeal of a Pantera. Even its name sounds X rated and don’t let the children hear you say it. Belly-button high roof, brutal angles and a Holley-fed Ford 351 V8 hissing vacuum less than six inches behind the driver’s head.

Few cars are as capable of inducing the drool reflex in teenage boys – and the wish to be a teenage boy again – as effectively as a fly yellow Pantera.

But unlike the other poster-on-the-wall exotics – 911 turbos and Countaches – the Pantera was a car a teenage boy (a middle class teenage boy) might conceivably own one day. Because unlike the purebreds, this mixed-breed wonder was not priced like Porsche and Lamborghinis. 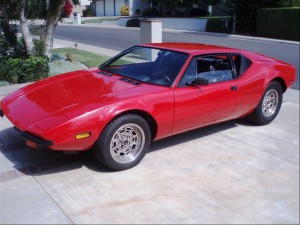 Conceived as the replacement for the Mangusta, the Pantera was similar in layout but based on a steel monocoque design laid down by Tom Tjaarda  – with the early bodies all hand-built by Italian coachbuilder Carrozzeria Vignale.

Like its predecessor, the Pantera was a mid-engined car, with the engine being a Ford small block. But the Pantera would receive a less-small block than the Mangusta – which used the 289/302 V-8, tuned to 306 hp.

To up the performance ante – very necessary in 1971, when 306 hp was not that much to write home about – a larger, stronger 351 Ford V8 was fitted. Featuring 11:1 compression and a high-lift camshaft, this engine was factory rated at 330 hp. This was probably closer to 380 hp and in any case, it was enough to deliver muscle car-quick acceleration  – 0-60 in 5.5 seconds; a high 13 second quarter mile – but also a genuinely exotic 160 mph top end.

Muscle cars had the power to get there, but not the gearing. They had three speed automatics or four speed manuals and rear axle ratios for all-out acceleration. But without more gears, their top speeds were mechanically limited to Not All That Much. Most of them were screaming for mercy, the tach needle dangerously close to redline, by 110 or so.

But the Pantera had a five speed. And that wind-slicked, low-down shape . . . which actually had terrible aerodynamics. The car was a notoriously evil-handling thing at high speed. But it was much lighter than the typical two-tonner coming out of Detroit’s factories at the time and so very high speeds were possible.

And, exclusive to exotics – which were the only cars, for years, that had both the power and the gearing to reach them. 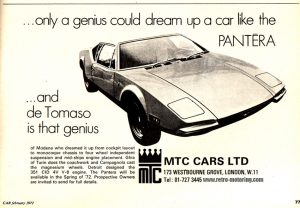 As the ’70s waxed, the Pantera’s capabilities remained exotic, too. Meanwhile, the performance capabilities of non-exotics began to wane as the government’s emissions and fuel economy fatwas strangled not just performance cars but the performance of cars generally. By 1975, the Corvette had been gimped down to 185 hp, the Z28 Camaro had been retired and Pontiac’s Trans-Am had been rendered sore-gummed and loose toothed, with its maximum engine a meager 200 hp 455 lifted from the the Safari station wagon.

This made the largely unchanged Pantera seemed all the more exotic. 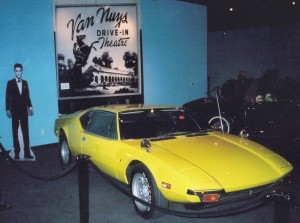 However – and very much unlike other exotics of its era – the Pantera was not exotically priced.

The ’71 carried an MSRP of $9,800. Not cheap, certainly – but still within the reach of a determined middle-class working stiff.

And the Pantera – sold at first through Lincoln-Mercury dealers – had a Ford drivetrain. That meant it was affordable to keep. It did not have eight Dellorto carbs or a mechanical fuel injection system or even overhead cams. It had a single Holley carb. A hydraulic cam and pushrods and two valves per cylinder. Basically, the same mechanicals as a Mustang – or an F100 pick-up. 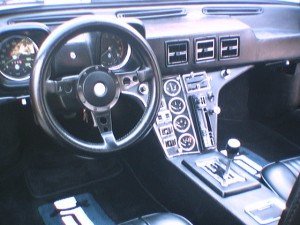 This is why even used Ferraris are hard bargains – while a Pantera with a tired engine can be brought back to life by almost anyone who has the skill to resuscitate a worn-out Mustang.

The Pantera was also luxurious at a time when most exotics were anything but. For example, air conditioning – and power windows – were standard equipment. AC was merely offered in the Ferrari 365 – but would cost you another grand, bringing its MSRP to nearly $25k in early ’70s Fed Funny Money – or more than twice as much as the cost of a new Pantera with AC.

A radio, however, was not included – though there was a slot for one and the car had the necessary pre-wiring. According to legend, Alessandro De Tomaso felt that most owners would rather hear the 351 sing than Janis Joplin. 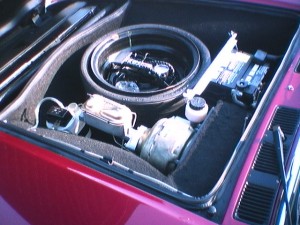 Also unlike other exotics then – and now – the Pantera was a very everyday drivable car.

In part because of its very conventional – and very street-friendly – Ford V8.

Unlike a Ferrari twelve, it made lots of torque as well as horsepower – and made it at low RPMs. It was not necessary to wind the engine to 4,000 RPM and feather the clutch to avoid stalling the car out in traffic.

The ZF five-speed transaxle – same as the one used in the LeMans-winning Ford GT 40 –  used a hydraulic-assist clutch, too – a feature every modern car with a manual transmission now has but which was exotic equipment back in the early ’70s. It made working the car’s clutch easy – not like doing 300 pound leg presses at the gym,  as was the case with most ’60s-early ’70s-era muscle cars with manual transmissions. A car like an L-88 four-speed Corvette or SS 454 Chevelle with a Muncie four-speed was a hairy beast to deal with. The Pantera was much more tractable.

And of course, the Ford V-8 was as simple – and inexpensive – to modify for even more power as any Mustang’s.

A weekend cam swap and some carb jetting/ignition tuning could – and did – get 400-plus hp out of the Bluto Blutarsky 351 without requiring the bank account of a mogul – or the technical skills of a Ferrari mechanic.

Some derided the car for just that reason – mocking the Pantera as the bastardized offspring of a back alley tryst between an aristocrat and a working girl.

But this only made the car more appealing to those who owned one. It was fun to fuck with Ferraris – as Carroll Shelby (and Ford) did a few years previously with the AC Cobra. To rub the noses of the cognoscenti in the fact that a cast iron, two-valve, single cam, pushrod, single four barrel Ford V8 engine was not only a match for an overhead cam aluminum V-12, but in many ways, superior to it. Short of deliberate abuse, it is very hard to hurt a 351 – and if not deliberately abused, they’ll go for 100,000 miles without major work.

Ferrari V12s are beautiful things, but 100k and largely fuss-free? 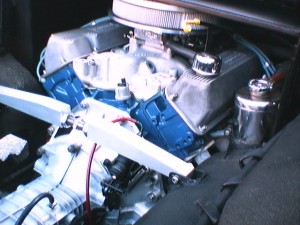 Yeah, sure. Just like Caitlyn Jenner is a woman.

In its second year of production, the Pantera lost its high compression 351 – but gained a more aggressive camshaft to make up for it –  fitted to a heavier-duty version of the 351. This was the 351 Cleveland – a four-bolt main version of the 351 more or less the same as the one used in the same year Mustang Mach 1.

It had 9.0:1 compression and – in the Mustang – was rated at 275 hp. That may seem a heavy drop from the original’s 330 hp, but one must keep in mind that 1972 was also the year the industry switched from reporting engine output in terms of SAE gross hp to SAE net – which is the way it’s done to this day.

SAE gross hp was measured with the engine on a test stand – not in the car – and typically done without accessories such as the AC compressor hooked up and with straight headers and no mufflers.

SAE gross ratings typically over-stated the output of the engine in production tune, installed in the car, accessories and exhaust installed, by about 20 percent. So, that 275 SAE net figure was not far off the original, high-compression 351’s SAE gross number. And it could now run on regular unleaded!

The fat Holley 750 still sucked air right behind the driver’s head; the .50 cal quad exhaust still spewed rearward via a set of factory tube headers without interference from catalytic converters. 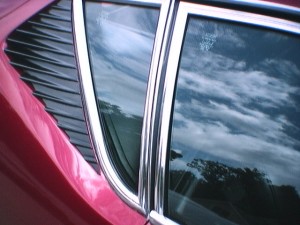 De-tuned or not, a Pantera was something special.

Though its straight-line performance was about the same as the Mangusta’s, the Pantera was a much better balanced car – literally.

Its weight split (front to rear) was 40.9 percent/59.1 percent vs. the Mangusta’s rear-biased 32/68 percent split. The nose light, tail-heavy Mangusta was an easier car to get into trouble in. Real trouble – not just the legal kind. The Pantera might get you to the top of the local cop shop’s Enemies List – but it was less likely to get your name into the obituary pages.

The car’s main defects were atrocious rearward visibility, iffy electrics and a tendency to rust if allowed to get wet.

Ford bowed out of official involvement with the car after the 1975 model year – by which time about 5,500 Panteras had been sold through Lincoln-Mercury stores. But Alessandro De Tomaso refused to let the car die on the vine and continued to build them – in reduced numbers but ever-increasing audacity – all the way into the early 1990s.

Upgrades along the way included massive pontoon fenders and airfoils on the outside – and ever more opulence inside in the form of Lusso and GTS versions with hand-fitted leather door panels, dashes and seat covers. 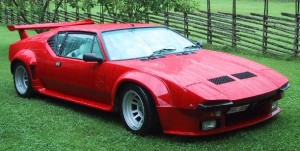 That’s pretty solid for a car born during the early Nixon years. 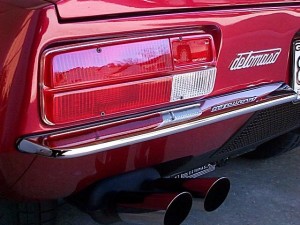 Although today’s supercars may be quicker – and faster – none of them can touch the experience of letting loose an air bag-free, traction-uncontrolled Pantera 351.

Just you and it – and nothing and no one getting in the way.