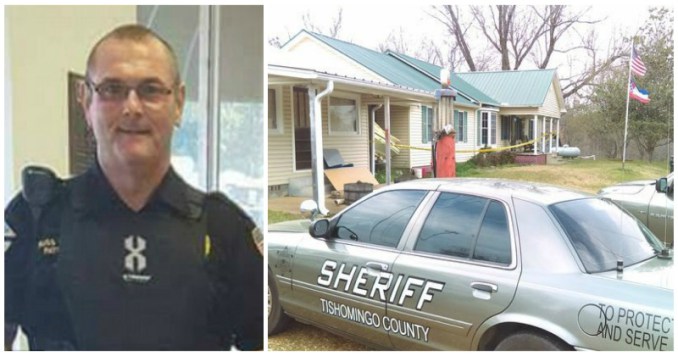 Tishomingo, MS Police Officer Russ Robinson was found dead in his home from a self-inflicted gunshot wound on March 24 after admitting to authorities he had molested minors.

The Alcorn County Sheriff’s Department, with assistance from the Mississippi Bureau of Investigation, questioned the 53-year-old officer about allegations he molested a 17-year-old boy after flashing his headlights to get the teen to pull over. During questioning, Robinson admitted to multiple offenses of molestation according to The Clarion Ledger.

Allegations have come up in the past with Robinson, but authorities have basically ignored them until now.

Several years earlier, Robinson, a deputy then for Tishomingo County, left his part-time job at Brooks Grocery in Iuka following another such accusation.

Asked if Robinson had been fired because he allegedly molested a young male there, Brooks replied, “I told you before, that’s private information.”

Tishomingo Police Chief Mike Kemp said he was aware that authorities on March 23 were questioning Robinson about molestation allegations.

“(The allegations of molestation) happened in another county,” Kemp said. “I knew he wasn’t charged.”

He said Robinson was still working for the police department at the time of his death.

Asked about Brooks Grocery, Kemp said Robinson was never fired from there.

“There were some innuendoes,” Kemp said. “We determined that he resigned from Brooks Grocery. I don’t think there was any molesting. Certainly no charges were made.”

The rumor, Kemp said, was that Robinson had said something inappropriate.

“Nobody ever contacted us or said anything,” he said. “I had heard the rumor, but until I had concrete information, there was nothing I could do.”

Asked if he questioned Robinson about this, Kemp said no.

He explained that he was never approached by anyone with any information.

But Kemp was working at the sheriff’s department several years ago with Robinson and then-narcotics officer Jeff Palmer.

Palmer’s estranged wife, Leigh, recalled him coming home several years ago and talking about a surveillance video from Brooks Grocery, which supposedly showed molestation by Robinson.

She said he worried this matter could “come back and bite them” since no criminal action was taken against Robinson.

Palmer denied all of this, saying it was a lie and that his wife has admitted under oath to lying in the past when she was mad.

Documents show Jeff Palmer’s veracity was called into question when he failed a polygraph test in which he was asked about using drug buy money for personal use.

Palmer, who is no longer in law enforcement, had been suspended from the state Bureau of Narcotics after he was accused of falsifying and forging vouchers “for the purchase of information and evidence.” A 2014 letter from the bureau’s lawyer concluded no money was “actually diverted by Palmer. … There was no definitive determination as to whether Palmer financially benefited.”