Well, they’ve kept it for the past two years – without having charged the owner with any crime, much less the courts having convicted the owner of any crime:

Two years ago, U.S. Customs and Border Protection “heroes” used civil forfeiture to seize Gerardo Serrano’s truck at the border crossing in Eagle Pass, Texas. The armed government workers found five low-caliber bullets in the glove box, which the agency claims entitles them to seize the man’s vehicle under civil forfeiture laws because those bullets constitute “munitions of war.” The agency still holds Gerardo’s truck, though it has never brought its case before a judge. Gerardo has joined with the Institute for Justice to file a class action lawsuit demanding that the agency provide a prompt hearing before a judge whenever it seizes property. 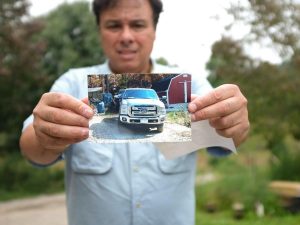 This is the upside-down world of civil forfeiture, which allows law enforcement to seize property without convicting anyone of a crime. Five forgotten bullets are all it takes for the government to argue that someone is an international arms smuggler and rob them of their constitutional rights.

“Civil forfeiture laws are inherently abusive and this case proves it,” said Robert Everett Johnson, an attorney at the Institute for Justice, which represents Gerardo. “Despite the attempts of law enforcement officials to suggest there are safeguards on civil forfeiture, this case—along with hundreds of other cases—demonstrates that there are not. No just system would allow law enforcement to keep property for years without some kind of hearing before a judge.”

“When the agents told me they were seizing my truck, I said ‘No, you’re not seizing my truck, you’re stealing my truck!’” said Serrano. “I didn’t think that this could happen in America. I thought it was only countries like Cuba or Venezuela that would treat their citizens this way. It felt like they were thugs with badges.”

After seizing the truck, CBP sent Gerardo paperwork presenting him with a choice. If he wanted his truck back, he could either submit to an administrative process, where the agency would exercise discretion to keep or return the truck, or he could go to court and fight the forfeiture. Gerardo, who has strong opinions about civil liberties, wanted to take the matter to court, not fight a losing battle before the agency.

Asking for a court hearing required Gerardo to send CBP a check equal to ten percent of the value of the truck. The agency promptly deposited the check, for over $3,800, but nearly two years later the agency still has not given Gerardo his day in court. If the government arrested Gerardo to pursue criminal charges, it would have had to bring him before a judge without unnecessary delay—generally within 48 hours. But because the government took Gerardo’s property instead, it claims it can keep his truck for years without any kind of hearing. Property should not and cannot be relegated to second-class status under the Constitution.

“Imagine being detained at an airport checkpoint because you innocently forgot to take a tube of toothpaste out of your luggage,” continued Johnson. “But rather than asking you to throw it out or put it in a plastic bag, the TSA agents told you they were seizing all of your luggage, including the toothpaste tube. That’s exactly what the border patrol did to Gerardo.”

“Of course I want my truck back, but that’s not why I’m filing this lawsuit,” said Serrano. “I’m doing this for my children and the thousands of other Americans who should never have to go through what I’ve gone through.”

The Institute for Justice has litigated more than a dozen civil forfeiture cases nationwide in both state and federal courts, including the owners of the family-run Motel Caswell in Massachusetts, a woman in Albuquerque whose car was seized by city police, small business owners across the country whose bank accounts were targeted for civil forfeiture by the IRS, and a class of property owners in Philadelphia challenging that city’s forfeiture machine.