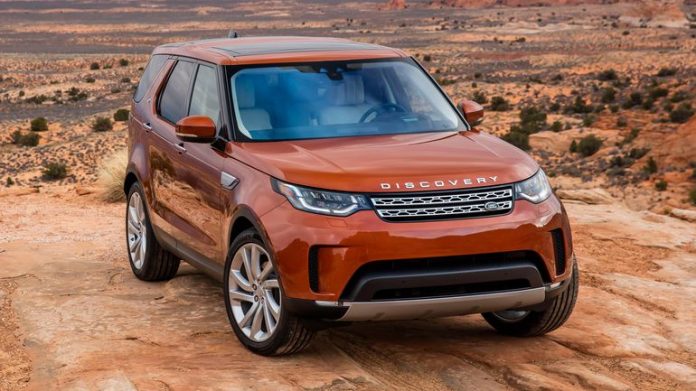 The V8 is long gone – probably for good – but the Disco is back.

Not the Bee Gees. The Land Rover Disco. 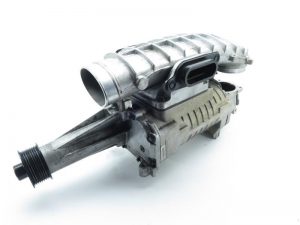 And there’s a new turbodiesel engine, too.

It’s one of almost none you can find under the hood of any new SUV.

The Disco fills  the slot in Land Rover’s lineup vacated by the retiring LR4 – which took the place of the Disco back in 2004.

It’s a full-size, 5-7 passenger luxury SUV that is also among the most capable SUVs available, luxury or not. 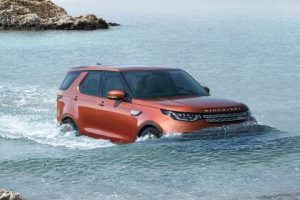 Don’t let the dual DVD rear entertainment system or the outstanding 14-speaker Meridian ultra-premium audio rig fool you. This is a machine that can go extremely off road – as opposed to striking an off-road pose.

A top-of-the-line First Edition Discovery with the supercharged gas V6 stickers for $73,950. These are serialized (2,500 will be built) and come with unique interior and exterior trim. 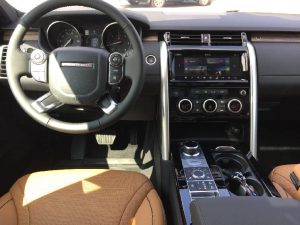 All trims come standard with a serious 4WD system – with multiple terrain modes. The trim/price differences are based on luxury amenities and technology – not capability.

The Disco has few direct competitors because there are precious few alternatives – luxury or otherwise – that have similar off-road bona fides and offer either a supercharged gas engine or a mighty turbodiesel V6.

The Disco name goes way back but the vehicle its affixed to is clean sheet, an all-new design that retains the essential elements – including a “stepped” roof to make for more headroom in the second (and available third) row and no-compromises made to its formidable off-road capabilities  . . .  but deals with the current political realities in extremely clever ways. 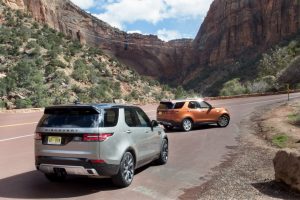 These realities include ever-more-demanding fuel economy regs designed, it seems, to force-retire V8s by making them too expensive to even offer in other than extremely high-end, low-production vehicles like the Disco’s stablememate, the Range Rover – which starts at $103,895 with the V8. That price guaranteed to keep production low and thus not run too far afoul of the government’s mandatory minimum fuel-efficiency fatwas.

The Disco deals with this dilemma by bolting a blower  – a supercharger – to a mid-sized V6, with V8 horsepower resulting.

Much more horsepower than the V8s in the Series I and Series II Discos. But without the regulatory kneecapping that comes with a V8 these days.

The supercharged V6 isn’t a gas sipper – but it it sips less gas than the old V8 – and that matters to manufacturers like Land Rover, given the regulatory regime, as much as horsepower and performance matters to the people who buy Land Rovers.

What will also matter to Land Rover buyers is that the Disco is much quicker – and hundreds of pounds lighter – and handles vastly better than the earlier Disco ever did.

And also better than the LR4 ever did.

If there’s a downside, it’s not easy to see it. 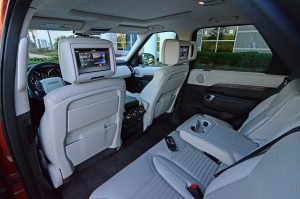 No defroster grid embedded in the windshield. Most Land Rovers have this very-helpful-in-winter feature.

Or at least, they did. 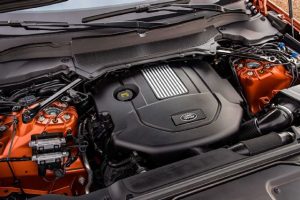 Two un-run-of-the-mill things about the Disco:

Neither are common – despite both being desirable.

Supercharging is better than turbocharging, in several ways. One way is that it’s immediate boost because the blower is engine-driven, like any other accessory. Even though great strides have been made with turbos – with reducing the lag time before the boost builds and acceleration happens – there is still noticeable lag, most of the time.

Because with a turbo-boosted engine, boost must build. The turbo is exhaust driven. And the boost doesn’t build until after the exhaust pressure begins to turn the little wheel inside the turbocharger that in turn pressurizes the incoming air charge. But exhaust pressure has to build before boost pressure builds.s 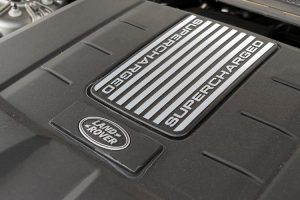 The blower’s response is immediate; the surge of boost right now.

The blower is also simpler. Fewer parts – and the parts do not have to work in the extreme high-heat environment that turbochargers necessarily must deal with – being necessarily installed in the exhaust system, usually right up near the engine, where it’s the hottest.

Blower also work with less boost – 6-8 pounds or so is typical. Versus the now routine 20-plus pounds of boost many turbos cram down the cylinders of the engines they are bolted to. This makes for lots of power – and (sometimes) not long life. An engine can be built to withstand these higher pressures, but the higher pressures are the inevitable enemy of engine longevity. 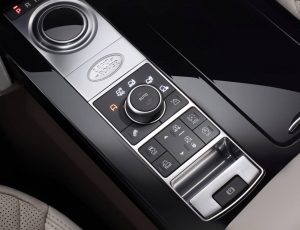 It almost makes you want to say Oh, behave!

Which is actually appropriate because the blown V6 is shared with Jaguars and the aluminum bodywork, too. Well, the concept of it. It is, after all, Jaguar Land Rover (one company) and the usufructs are general.

Or go turbo – and diesel. 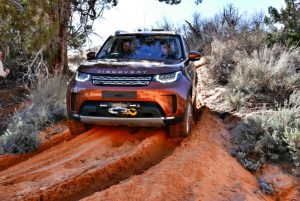 All Discos have the same ultra-capable full-time 4WD system, with multiple selectable terrain modes and 8.6 inches of ground clearance. If you opt for the air suspension, you can jack the thing up 11.1 inches via a console mounted switch.

The blower Max, the blower!

Some will get the reference. It’s from the original (Mel Gibson) Mad Max movie. His mechanic buddy has built him the ultimate Interceptor – with a de-clutching supercharger. Max’s eyes go wide as the throttle is goosed and the engine howls.

But of course, the Interceptor couldn’t go off-road.

If only the blower were a bit louder. Still, you can hear it. That very specific keening sound that only a supercharger makes. It is a lovely sound. Menacing and beautiful at the same time – kind of like Wagner. The hair rises on the back of your neck when you hear either, just the same. 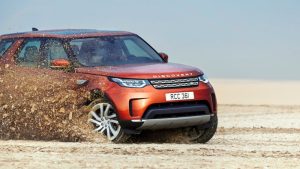 Also Wagnerian is the Disco’s acceleration. It needs a helmet with wings on the side of it. 4,900 lbs. empty and it jumps to 60 in less than 7 seconds. Others may be quicker – but when the pavement ends . . .

And that’s what makes this thing so  . . . operatic. What it can do on road is matched by what it is capable of doing off-road.

And that is no small thing.

But it is an unusual thing. 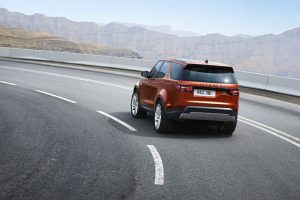 The Disco does not drive like any other SUV. The experience is immediately distinctive. Not just the blower and that fabulous background keening. It’s light on its feet, poised. Agile isn’t editorial excess. The steering feels overboosted at first, at low speed. But this changes as speed increases. Effort increases, just enough weight to give feedback. It’s as easy to steer into a tight spot when you’re barely moving as it is to steer it through an apex when you’re really hauling – which it will do without the Heaves and without herky-jerky stability control intervention.

It lacks the on-road oafishness in the curves that usually comes with serious off-road credentials. The Disco is as easy to live with every day as a Camry. 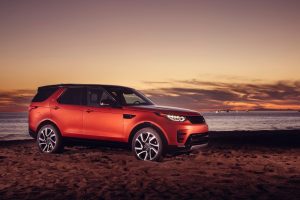 Like the Meridian sound system, about which more in a moment.

This thing is the total package. I don’t say that often. I don’t think I’ve said it in years. But it needs to be said – it must be said – about the Disco.

The LR4 (RIP) looked more like the original Disco – especially the signature stepped roofline – which is now just hinted at in the profile of the new Disco.

But the space is still there. More of it, in fact.

The Disco has grown. 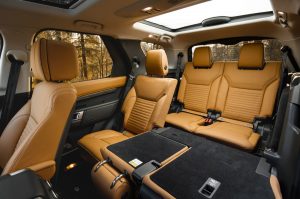 It is now almost as large as the Range Rover – just not as heavy (or as expensive) and with more room for people (the RR seats five only).

The Disco is 195.6 inches long overall – which is just 1.2 inches less long than the RR and 5.2 inches longer overall than the LR4. It rides on the same 115-inch wheelbase as the RR – and is otherwise dimensionally similar.

But it’s arguably more space efficient – especially if you need a third row.

And that third row is adult-friendly, a very rare find outside of Leviathan Class SUVs like the Cadillac Escalade ESV or the extended wheelbase Lincoln Navigator – and neither of those even pretend to be off-roaders. The Caddy hasn’t even got 4WD Low gearing anymore – and don’t bring up angle of departure/approach, either. There’ll be plastic chrome bumper all over the road. 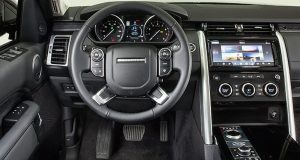 The Disco has 39 inches of legroom up front, 37 in the second row and 33 in the third – but it’s the headroom that makes that third row more-than-teenager-viable. It’s only about an inch less than in the second row (37.8 inches vs. 39.02) even with the panorama sunroof.

It does offer executive-style reclining rear seats (with swing out dinner tables) but horses for courses. The RR is a different animal. Both it and the Disco are luxurious and capable; the Disco simply lets more people experience these things at one time. 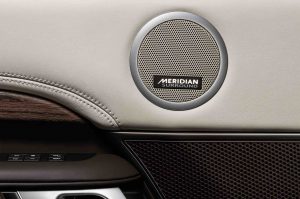 This includes, as an aside, the words-are-inadequate Meridian audio system. You need not be an audiophile to appreciate it. The clarity and depth of the sound produced is so real it’s unreal, almost. Cue up Tannhauser. The Berlin Philharmonic appears. Joan Jet is in your lap – the Blackhearts in the back seats.

I don’t hate myself for loving you. 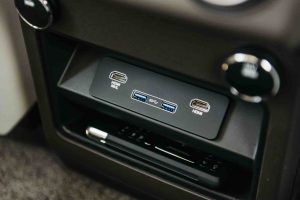 Some general coolnesses: There are nine USB ports, so no one will ever go unplugged.

You can configure the second and third row positions remotely, via your phone – so as to prepare the vehicle to accommodate people or cargo or both.

There is a FitBit-style waterproof activity bracelet you wear so you don’t have to carry keys with you – or worry about them getting wet. You leave the keys safely locked – and dry – inside the Disco. 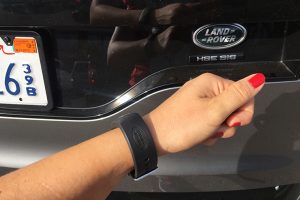 Well, the windshield hasn’t got the embedded grid heater system that LR vehicles used to have and which the RR still has; also several Jaguars, including the F-Pace. This feature – unlike so many “safety” features crooned over by most car journalists (but not me, because many of these features amount to presumptive idiot-proofing and I like to assume you are not an idiot) this one has functional value even if you are a superb, attentive driver. It clears the windshield of ice on cold days without you having to chip at it with an chisel – and keeps ice from forming as you drive on cold days.

It’s an excellent feature – and LR ought to bring it back. 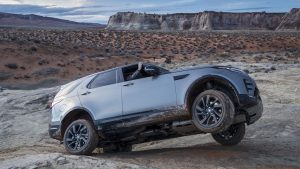 The other thing is just a quibble. The blower is too muffled.

Good news, though: You can remedy this yourself, without in any way harming the Disco or your warranty. Just pop the hood and remove the plastic acoustic cover they pop onto the engine.

You will be very glad you did this.

Final thing: There has been some catcalling from the bleachers about Land Rover’s decision to go unibody across its model lineup – as opposed to body-on-frame construction, which is regarded as tougher. But unibodies can be very tough, too. Jeep Grand Cherokees don’t seem to be gimped, nor Porsche Cayennes – and unibody design have the advantage of being lighter and much more tightly put-together. Fewer squeaks and rattles. 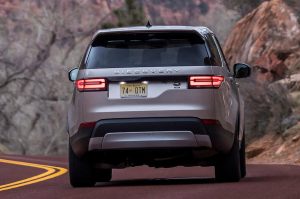 You get balls – and finesse.

The diesel’s not a bad gig, either.

And both are the only games of their kind in town.